Slumming in Europe, Japan and Brazil

This is one of those times when a single picture does say a lot: 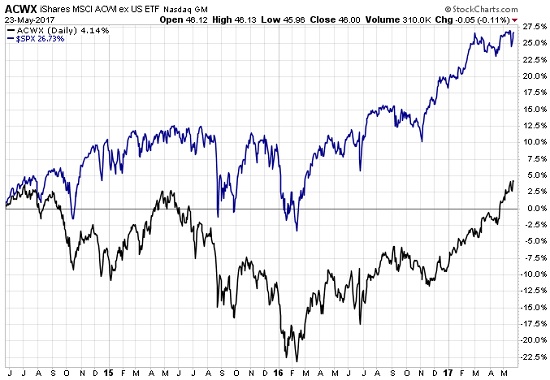 The blue line on top is the S&P 500 Index representing 500 large-cap U.S. stocks. The black line on the bottom is the iShares MSCI ICWI ex US ETF (ACWX), aggregating 22 developed and 23 emerging markets outside the U.S.

And the underperformance actually stretches back seven years. As a result, while the S&P 500 has averaged an annualized gain of 7% over the last decade, the rest of the world has managed barely 1% annualized over the same span.

It’s easy to understand why. The developed economies of Europe, as well as Japan, have dramatically underperformed the U.S. over that span, while emerging markets have been shaken by a variety of national financial crises, capital flight and corruption scandals.

In 2011 the world ex US was down 14% as European austerity submerged the continent in a nasty recession and nearly tore apart the European Monetary Union. The hangover hung around, saddling the same ex US proxy with modest losses in 2014 and again in 2015.

Adding insult to injury for American investors overseas, the dollar index rallied roughly 25% over nine months starting in mid-2014, further depreciating their foreign holdings. It has since held on to the bulk of those gains.

Europe has seen a particularly strong lift, and it has finally begun to translate in equity outperformance. Ex-US proxy ACWX is now up 14% year-to-date, doubling the gain of the S&P 500 so far in 2017. Its recent surge was prompted by the presidential election results in France, where a business-friendly centrist handily defeated a far-right populist. 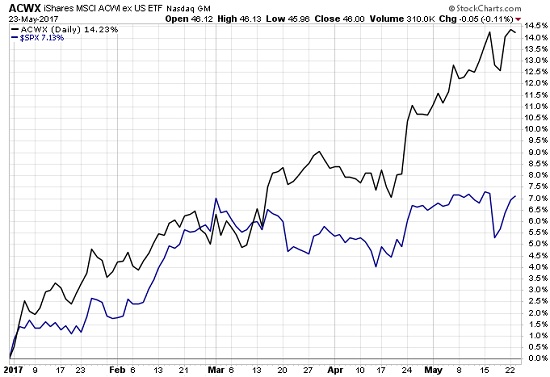 It’s my job to make sure you’re not underweighting foreign stocks at precisely the wrong time, as most U.S. investors are still doing out of persistent home bias.

The best way to join this party is via diversified funds with a decent yield, and I particularly like those focused on the small caps.

Foreign small-cap stocks have lagged behind their U.S. counterparts almost as badly as the large-caps, and have more to gain from the current expansion. They have also garnered far less institutional cash than the large-caps, and so could actually hold up better in a correction even though they’ve traditionally been more risky and volatile.

The WisdomTree Europe SmallCap Dividend Fund (DFE) is an ETF with 341 holdings, and its portfolio has an aggregate yield of 2.65% based on a standardized Securities and Exchange Commission calculation. The top name, an Italian oil refiner, accounts for a little more than 2% of the portfolio, and only five stakes exceed 1% of the total. Just over a quarter of the portfolio is allocated to industrials. Just under a quarter of the fund is parked in the UK, followed by Sweden at 14% and Italy at 13%. In 2016 the fund distributed $2.21 per share, or 3.4% of the current price. Net asset value has increased 15% year-to-date and 20% over the last year. The expense ratio is 0.58%.

I’ve also recommended Japan Smaller Capitalization Fund (JOF), a closed-end vehicle managed by Nomura based on its fundamental research. The fund had 118 holdings as of November, with the top 10 accounting for 22% of the portfolio. The share price is up 16% year-to-date yet remains 11% below net asset value. The fund distributed 94 cents per share late last year, or 8.3% of the current share price. The distribution took up just 37% of the increase in net asset value in the year through February. The expense ratio is 1.09%.

iShares MSCI Brazil Small-Cap ETF (EWZS) went on clearance sale just last week as a result of a corruption scandal egregious even for that country, which has now seen its last three presidents accused of taking bribes amounting to not-so-small fortunes: 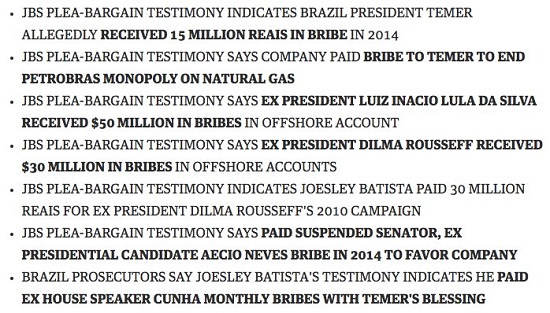 I’m not going to claim the resulting market declines, along with investor revulsion and potential government credit downgrades, won’t hurt an economy only just emerging from a deep two-year recession. Unemployment’s at 14% and the political crisis threatens to derail the government’s reform agenda.

On the other hand, since that agenda involved fiscal austerity perhaps its failure will actually help keep the tenuous recovery rolling. The local stock market and currency plunged 9% Thursday when the revelations hit, and stocks haven’t rebounded much since.

So the EWZS is now up 17% year-to-date rather than 39% as of a week ago, getting hit by the currency plunge as well, of course. This looks to me like a classic overreaction worth fading.

The EWZS aggregates 60 stocks and leans heavily on the consumer discretionary sector, which accounts for 37% of the portfolio. Utilities are a distant second at 14%. Among the top five holdings are a for-profit education outfit, an operator of health clinics and an airline loyalty program manager. Will their bottom line meaningfully suffer because popular suspicions about political corruption have just been so spectacularly confirmed? I doubt it.

I feel strongly that European, Japanese and Brazilian small caps are among the most attractive asset classes U.S. investors can access at the moment.

My fourth pick in the foreign small-cap space doesn’t represent a particular geography. I just think Pear Tree Polaris Foreign Value Small Cap (QUSOX) is a heck of a mutual fund. It invests in some 75 foreign small-cap stocks based on its search for “the most undervalued streams of free cash flow in the world,” an attribute I also value highly. Split almost evenly between Europe and Asia, the portfolio is overweight industrials. The three top bets, none accounting for as much as 3% of the portfolio, are on a German safety equipment manufacturer, an Australian engineering group and a Japanese meat-packer. Those three are up 27%, 15% and 37% year-to-date. Annual turnover is minimal, yet Pear Tree Polaris has averaged an annualized return of 13.5% over the last five years and is up 17% year-to-date. The expense ratio is high at 1.56%, but the fund’s past performance has been worth it. The fund distributed 22 cents per share last year, or 1.5% of the current price.

There is more international exposure in the portfolio by way of megacaps Vodafone (VOD) and Taiwan Semiconductor Manufacturing (TSM), and these giants pay heftier dividends as well. Vodafone is a provider of wireless and broadband services primarily in Europe, which accounted for roughly three-quarters of the revenue in the recently reported fiscal year. Dividends consume the bulk of its free cash flow, and the second of two annual installments will be paid out in August to holders of record as of June 9 for the American Depositary Receipts (ADRs). The company will pay out $1.63 in total this year, or 5.5% of the current share price. The stock is up 21% year-to-date, buoyed by better than expected annual results and forecast. But over the longer haul it’s been an underperformer.

Taiwan Semi, in contrast, has clobbered the S&P 500 since the start of 2016, rallying 60%. The world’s largest contract manufacturer or microchips has garnered  a big boost from becoming Apple’s (AAPL) primary chipset supplier. Last year, TSM paid a dividend of 75 cents per ADR net of a Taiwanese withholding tax, or 2.1% of the current price. This year’s dividend is likely to be declared in about a month and paid out in July.

I’ll address the portfolio’s two current Canadian income plays in a separate article in the near future.

In addition to a small cap foreign fund, what do you think about including a large cap foreign ETF such as ONTL? Any thoughts you may have would be appreciated.

Thanks for the info Igor! Have a great holiday weekend.

Thanks, Derek, you too!

Igor, we prefer the term bigly ’round these parts.