Get a Twofer: A Great Acquisition, Plus Organic Growth

I recommended Charles River on Jan. 13 because I liked its WIL Research acquisition. That purchase broadened Charles River’s menu of services, increased its customer base and gave it geographic exposure overnight. It looked like a strategic home run.

And while I was impressed with the consistent results Charles River (NYSE: CRL) reported in its base business, that was not the primary reason for the pick. The fourth-quarter results reported last week showcased an acceleration in the company’s growth rate.

But the company’s primary appeal is that investors are getting a twofer by buying Charles River—a quickly growing base business souped up with a strategic acquisition. The stock still trades at only 14 times 2017 estimates despite 19% expected growth.

Charles River’s strong results for the fourth quarter: Earnings were up 23%, beating estimates by 6 cents. Management increased guidance for revenue, excluding the acquisition, and stuck to its numbers for WIL’s contribution. Both actions should give investors increased comfort in the stock.

The River Is Wide…

Charles River is known as a contract research organization. CROs provide services to biotech and pharmaceutical companies developing new drugs—CROs test products so the companies can save money on that step. We’ve always loved the concept of CROs because they cash in by providing an expensive service while taking none of the sometimes outrageous risks their clients do when they bet on FDA approval of a drug. 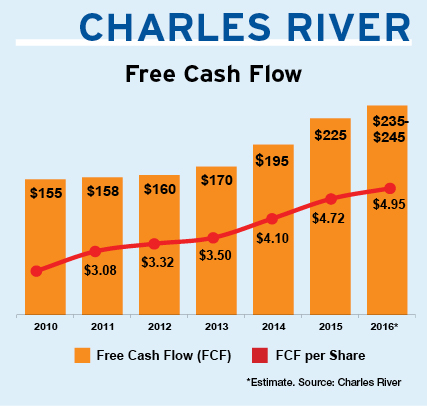 The work subcontracted to CROs is growing rapidly. In part this is because the gigantic pharmaceutical mergers of the past few years are justified by cutting research and development expenses.

Drug companies look to biotech companies as portable research labs, and also as a way to limit their risk. When joint ventures are struck with biotechs, the latter collect royalty payments upon success. This allows drug companies to harness the potential of new drugs while curtailing the risk—no success, no royalty payments.

But biotechs are overwhelmed and look to CROs for help. Funding to biotechs hit a high last year, yet many of these companies do not have the resources or the scale for all the research and testing needed. This work is moving over to the CROs.

The company spent the last five years building out the suite of services offered to biotech and large pharmaceutical companies. The spectrum of services range from discovering possible drug molecules to preclinical studies in animal models (think mice) to manufacturing an approved drug for a customer.

With the expansion of its service menu virtually complete, Charles River’s revenue growth was destined to revert to the low-single-digit rate of the industry. Yet on the fourth-quarter call, CEO James Foster was unusually exuberant about new customer requests for services.

So although assumptions for revenue growth and profitability for WIL Research remain unchanged from the company’s Jan. 7 announcement, the basic business should grow 9% to 11%, faster than previously expected.

The continuing trend of large pharmaceutical companies outsourcing research and development as a way to save money has been aided by a plethora of small, well-funded virtual biotech companies. These bare-boned companies may possess special patents but often don’t have labs for advancing the research. Charles River is happy to serve them.

Demand from biotechs is growing faster than demand from other customers and is boosting CRL’s growth rate. Management noted that biotechs raised a record amount of capital in 2015 so that their purses are plump. So Charles River’s success doesn’t depend on biotechs’ ability to raise money from the public markets. 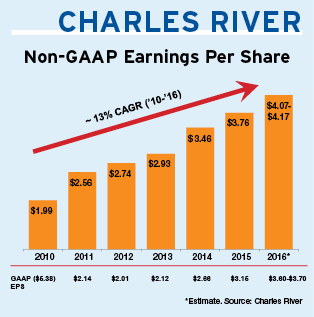 Earnings for 2016 should equal $4.34 per share, including the estimated results from the WIL Research acquisition, which should close early in the second quarter.

Earnings in 2017 will grow even faster as Charles River begins to cross-sell its services to the agricultural and chemical companies that are currently WIL customers. Our estimate for 2017, which assumes 8% growth for the base business and a 50-cent-per-share contribution from WIL, is $5.20.

Charles River generated $225 million of free cash flow (cash from operations after spending on capital equipment) versus its internal goal of $207 million. Strong cash flow will allow the company to pay off the $350 million in debt it takes on to help fund the $585 million purchase of WIL Research.

Charles River’s stock initially surged on its solid earnings report but then faltered with the market’s turmoil. Because these earnings look better than we originally expected, we see the stock as a fabulous bargain.