Seeking Shelter From the Storm

I’m a “bottom-up” analyst. Instead of betting on which industry might outperform, and then screening for names in that sector, my analysis begins with a stock that has a promising story, which many do right now.

But these stocks don’t live in a vacuum. They get churned by the market. In a calm market they might flop around a bit on economic news, but in volatile times, they can be held under water gasping for air.

And yet the most cataclysmic waves often wash ashore incredible bargains. My job as Profit Catalyst’s stock picker is to stress test each of my assumptions using earnings models and verify each stock’s true value. In other words, does the stock’s behavior reflect how the company’s business is performing?

The answer is a resounding no.

Waves of indiscriminate selling are frightening. The headlines read as if the world is coming to an end, but most investor hand-wringing seems to be about the possibility of an economic meltdown.

Outside of the oil sector, actual earnings reports do not reflect doom and gloom. PepsiCo, the global consumer products company, just reported earnings growth of 10% and predicted 8% growth, despite what its CEO describes as an “incredibly bumpy environment.” Cisco, another large global company, reported a monstrous 35% increase in earnings. While this is a small sampling, most other reports show a similar pattern—solid growth dragged down by currencies. These are not the numbers of Armageddon.

Besides the fear that China’s economic slowdown is contagious, the most recent worry plaguing the market has been the prospect of negative interest rates.

I would argue that the Federal Reserve, which moves slower than an arthritic tortoise, is unlikely to switch from a stance of increasing interest rates to ratcheting them to below zero in less than two months. It took roughly four years of jawboning for the Fed to actually increase rates one quarter of a point last December. This is not a capricious band of decision-makers.

The market’s behavior reminds me of last year’s winter in Boston—brutal and unrelenting. Similar to Bostonians getting hit with a 12-inch snowstorm each week, investors are smacked with another tsunami of selling on a daily basis. While it’s tempting to jump ship and head for dry land, it can be foolish to sell stocks amidst such market turmoil.

How Cold Is the Water?

Instead, I try to distinguish market-related weakness from something that might be company-driven. A conviction in each stock’s fundamental story helps me keep a level head, even in the face of ugly declines.

And man, it is ugly out there.

The Russell 2000, the market index that most closely mirrors the small-cap stocks of PCA, is down 16% year-to-date and down 26% since its 52-week high last June.

My gut told me that the decline was worse than 16%, so I dissected the data to tease out the trend. I downloaded year-to-date performance data for all the Russell stocks and analyzed the distribution of gains and losses. I tell you this is one motley crew.

A decline of 20% is typically the definition of a bear market. Let me remind you these are performance numbers year-to-date. In the space of six short weeks, 35% of Russell 2000 stocks slipped into bear market territory.

The Russell 2000 is the gunslinger camp of market averages. Small-cap stocks generally are more risky. These companies are typically earlier in their earnings cycle and have less-stable balance sheets (more debt, less cash flow). This fragility can inspire fear during market routs. 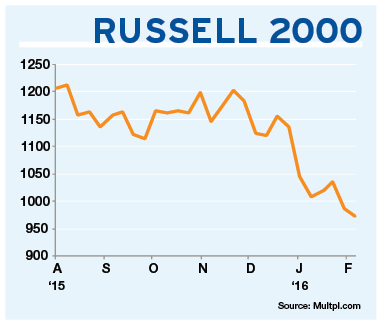 I don’t like the word fragile associated with any ticker I’m interested in. PCA has a disciplined focus on profitable companies that are growing earnings. There’s nothing fragile about their prospects. The stocks that make our list generate substantial cash flow, are not overly indebted and have significant growth ahead based on individual catalysts.

My list of recommended stocks is down 13% on average. This is not a performance I am excited about. But it is slightly better than the average and significantly better than most of my recommendations’ peers. PCA’s robust players should see their prices start to mirror fundamentals.

After digging through the fundamentals for each of these names, I can report to you from the operating room that the patient is doing fine. Of our five names, four have reported earnings. Of those, three were fabulous (SolarEdge, Charles River and Brunswick). Photronics had some issues with one product sector but is still growing earnings dramatically. Vera Bradley will report early next month.

I am not a market technician, nor a clairvoyant. I can’t predict the stock market’s future, but I do know from more than a quarter of a century of following the market that a strong correlation exists between increasing earnings and rising stock prices.

The stock-specific catalysts that I uncover for each pick should help insulate these names somewhat from economic gyrations. Certainly, PCA holdings will get tossed and turned by the market’s tides, but once the storm passes, strong fundamentals should leave these companies standing on higher ground.