Air Transport Services Group is ready to launch. The lessor and operator of cargo planes just signed a contract with Amazon to shuttle a portion of its packages across the U.S. In a move to cement Air Transport’s position as a preferred air partner, Amazon was granted warrants to purchase up to 19.9% of Air Transport stock over the next five years.

While the 20 planes currently under agreement will ignite earnings in 2017, it is likely that Amazon will expand the agreement in an effort to control and dominate the next-day shipping its customers now expect. By comparison, Air Transport’s largest customer, DHL, currently employs just 17 planes and makes up 46% of revenue. 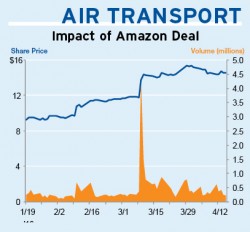 Management conservatively estimates flat earnings in 2016, as it builds out the company’s capacity to handle the demand from Amazon. As the planes are deployed, earnings will skyrocket 40%. Even after the share price surged 22% since the deal was announced, Air Transport could see its stock double on the back of Amazon’s growth.

In an ironic twist, Air Transport (NSDQ: ATSG) was introduced to me via my Launchpad method, which registers stocks trading above-average volume while moving up. I had never heard of Air Transport and would likely never have bumped into the stock without the help of this proprietary screen.

The company’s operating results were humming along before the news. Yet despite solid double-digit earnings growth, the stock drew little investor interest and was stuck at a $10 cruising altitude. On March 9, coincident with the Amazon announcement, the stock took off like a rocket, trading 12 times its average volume and soaring 24%.

Clearly, investors are excited about the opportunity to ride the coattails of Amazon’s tremendous growth. It is no secret that Amazon is well on its way to dominating online delivery of every imaginable good. Reliable, economic delivery is a priority for the company. Over the past two years Amazon’s shipping expense rose 31% and is eating up a larger portion of profits than it has historically.

Amazon, like its founder and CEO Jeff Bezos, is a control freak. The company hesitates to outsource any of its functions, so, for example, it doesn’t rent warehouse operations like other big retailers but instead built its own fulfillment centers and armed them with teams of internally developed robots. Fleets of delivery vans emblazoned with the Amazon logo now dot the nation’s roads. Some industry magazines claim that Amazon investigated building its own air force from the ground up but had difficulty securing enough of the right cargo planes that Air Transport owns.

Amazon’s plan to expand its in-house logistics to air freight became increasingly urgent after the 2013 holiday season, when many customers were left empty-handed on Christmas morning despite Dec. 25 delivery promises. An embarrassed Amazon blamed UPS and FedEx but gave angry customers $20 credits and refunds on shipping.

Amazon’s need for delivery capacity is growing exponentially. Just this month the company expanded its same-day delivery service for Prime customers from 16 cities to 27. It is impossible to know how many Air Transport planes Amazon might need in the future. That number has already leaped from two planes in the original trial to five this past winter, and now Amazon has 20 planes included in the deal sealed last month.

Amazon doesn’t disclose how many planeloads of packages it sends out each year, but one analyst took a guess that these 20 planes could handle 15% of Amazon’s capacity. This leaves a wide-open berth for future demand.

Air Transport has been in the airfreight business since merging with ABX Air in 2007. CEO Joe Hete, who started with ABX Air in 1980, has over 35 years of experience in the industry. 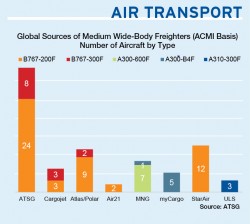 Air Transport serves a special niche in the logistics market with an innovative product. Large delivery companies like DHL lease planes to help supplement their own internal delivery capacity or sometimes to completely outsource the function.

As noted above, Air Transport’s portfolio of medium wide-body cargo planes is a critical ingredient in offering its customers attractive terms on these leases. These planes, which are typically acquired as passenger planes and then converted to cargo planes, are inexpensive to operate and are quite nimble.

The Boeing 767-200 and 767-300 models that Air Transport uses were both introduced in the mid-1980s. They can fly five out of the eight largest-volume transcontinental routes without refueling and are much less expensive to operate than larger freighters. They are the Goldilocks of cargo planes, not too big, not too small.

And Air Transport owns a mess of them. Of the roughly 80 medium wide-body cargo planes available today, Air Transport owns 32. As an expert within this class of planes, the company has developed a time-tested efficient system for acquiring and converting them to cargo aircraft.

Air Transport has been an excellent partner to DHL, which recently extended the terms of its leasing agreement to 2019. The extension of DHL’s contract, which made up almost half of Air Transport’s 2015 revenue, provides a stable base of profits from which the company will launch.

After a short trial that began last fall and encompassed the riotous holiday delivery season, Air Transport got the green light from Amazon that it had passed with flying colors. Amazon will lease at least 20 mid-size cargo planes from Air Transport Group for a period of five to seven  years.

While management hesitated to estimate the revenue impact from the Amazon deal, which will be felt in earnest in 2017 when all the planes are deployed, the agreement has the potential to send Air Transport’s numbers into orbit. The simple math is that DHL made up 46% of Air Transport’s 2015 revenue tied to the operation of 17 aircraft.

As you know, planes are pretty expensive. Air Transport estimates it will have $290 million this year in capital expenditures, of which $215 million will be for new planes and the balance for maintenance. The company should cover $200 million of that amount from operating cash flow and the balance funded by debt.

Air Transport is in the remarkable situation that robust cash flow over the past several years allowed the company to spend $270 million on its fleet without increasing debt. I like the conservative nature of management, which requires generous returns on investment before committing to projects. Management confirms that the Amazon agreement hits those required rates.

Earnings will grow slowly in 2016 as the company acquires, retrofits and places new planes into service. However, I believe the stock will continue rising once investors digest the potential of the Amazon contract. Current estimates look for earnings of 64 cents in 2016 and then 90 cents in 2017, more than 40% growth.