Solar Sector Will Shine On SolarEdge

SolarEdge is down about 14% since I recommended it in January, but it remains my favorite stock. The reason is simple energy economics: Solar technology finally works well at a relatively low price (the price of solar systems is down 80% since 1995), and the cost will continue to drop. The more it drops, the quicker solar will rise exponentially from its current, miniscule slice of worldwide power generation.

And SolarEdge can cash in on this megatrend. I think the stock is a bargain at its current $24.94 per share.

The company also is a step ahead of the competition when it comes to cheaper, more-efficient components for solar energy systems. As its customers get squeezed to lower the cost of making these systems, SolarEdge already gives them a built-in price break on a better product. The company is part of the evolution that is making solar an affordable option. At the same time that the company has been lowering costs, it has been making higher profits per module despite the lower price.

There are many trends, both technological and political, that will fuel the demand for solar power systems. For example, President Obama’s Clean Power Plan, which is critical to the Paris climate agreement expected to be signed this month, will accelerate the United States’ and the world’s transition away from coal-powered energy plants to renewable energy. Today, solar generates only 1% of global energy, amounting to less than 1% of energy in the U.S.

Solar Market Insights, a publication from the Solar Energy Industries Association and GTM Research, estimates that the U.S. installed 7,300 megawatts of solar power in 2015, the largest amount ever and up 16% from the previous year. Solar accounted for almost 30% of new electric-generating capacity, eclipsing natural gas for the first time.

While these historical numbers are impressive, I’m most interested in future demand. Greentech Media, which generates research and news on the green tech market, estimates an additional 16,000 megawatts will be installed in 2016, more than twice the level in 2015.

A recent extension of a federal tax credit, which I’ll discuss below, encouraged Greentech to increase its expectations for solar installations over the next five years from 49,000 megawatts to 72,000 megawatts. Almost 10 times the amount of capacity installed last year is expected to be installed over the next five years. These are the secular waves of demand that transform companies.

While bulls may see sunny skies, bears will surely bring up the importance of government subsidies. Most governments worldwide, including the U.S. government, have provided subsidies to seed solar installations.

In the U.S. these subsidies come in two forms, the first of which recently got a major boost. The federal tax credit for solar lets those installing solar systems deduct a portion of their investment from their taxes. This benefit was to expire at the end of last year but was extended until 2023. The 30% deduction falls to 26% in 2020 and to 10% in 2022. Investors in solar companies breathed a huge sigh of relief over the bill’s passage late last year.

The second form of subsidies is controlled at the state level. Net metering rates are the most common subsidy offered at state levels. Net metering is the agreement between the utility and the consumer regarding the rate paid to the consumer for excess energy produced. Recently, utility companies have been fighting to add monthly charges to solar customers’ bills to cover the cost to transmit solar power back to the grid. These charges are determined by states.

Demand is volatile when the future of these subsidies is uncertain. If you don’t know what the final economics are for a solar plan, the risk level for investing in one rises. As states make long-term decisions on net metering rates, demand will be steady.

Most states, including California, the largest solar generator in the country, have issued rules supporting solar power. In fact, California recently set net metering rates for the next four years. But a radical ruling in Nevada this January set investors on edge. This ruling, which allows utilities to include onerous charges to solar power bills, is still being challenged by consumers and has already been partially reversed.

As I noted in my weekly column, Massachusetts recently increased the amount of excess solar power that utilities must buy back from consumers by 67%. Other states like Arizona, the nation’s second largest solar producer, have instituted small charges to solar producers’ monthly bills that decrease consumers’ savings slightly but keep the utilities happy.

Although these subsidies are important to consumers right now, the long-term trend of declining solar costs will make the subsidies irrelevant in the future.

Standing on Its Own Legs

While government subsidies helped to seed the market, solar is proving to be an energy-producing method that can survive long term without Uncle Sam’s help.

Solar’s holy grail is when pricing hits grid parity, which is when the cost of generating electricity via solar equals that of traditional electricity generation. Greentech Media estimates that 20 states are currently at grid parity, a number that rises to 42 by 2020.

I continue to look for other opportunities in the solar space. Solar system operators that persistently lose money get crossed off my list, but I am on red alert for other component makers or companies that can benefit from this wave of demand.

Few industries offer booming demand, improving technology and solid industry dynamics. Together, that adds up to a day at the beach for investors. 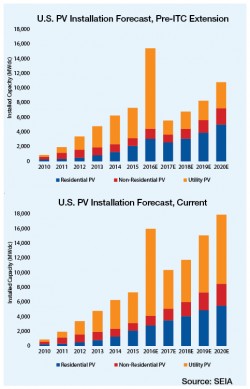 SolarEdge doesn’t make solar panels that collect the energy from the sun’s rays. That’s a good thing, because the solar energy industry is littered with panel makers that went bankrupt in cutthroat price battles.

Instead, SolarEdge makes these essential components for solar energy systems to work:

Inverters. These electrical boxes convert the direct current coming out of a solar panel into alternating current for use in a home or on an electrical grid.

Power optimizers. They increase the efficiency of energy harvested from solar (and wind turbine) power systems by tuning performance based on how much power is produced.

Monitors. These track things like how much power is generated as well as the system’s efficiency.