Water is the New Sexy

The water sector offers powerful, assured growth, the world’s safest yields and hype-free values. Within the next two generations, water is expected to become the most important commodity in the world, easily surpassing oil.

There are only a handful of publicly-traded water utilities and they provide water to about 10% of Americans (most water systems are government-run). Water may sound boring, but it is a natural resource essential to life and water utilities have generated consistent and growing cash flows that have made investors rich.

As it so happens, one of this handful, American States Water (NYSE: AWR), is an 82-year-old company that just yesterday (August 1st) increased its annual dividend for the 58th consecutive year. And not by a little, but by a lot — a 27% increase. Wow, now that’s what I call consistency! In fact, there is only one other company that has increased its dividend for more consecutive years than American States (curious? I’ll tell you later). Dividends are cool because they put cash in your pocket and tell you that management is shareholder-friendly. American States’ solid and steady growth is pretty typical for the better-run utilities, which is why so many people like to own them! Given the zero-interest-rate world we currently live in, the company’s 3.8% dividend yield isn’t bad, especially considering its safety.

Is Water Boring or Sexy?

What could be more boring than water? It has no flavor and restaurants don’t even charge you for it. It’s so plentiful that it covers 70% of the earth’s surface.

Hmm…70% is also the percentage of the human body consisting of water. Coincidence?

Anyway, 97% of the world’s water is salty, undrinkable sea water. A little more than 2% is locked up in glaciers and permafrost, leaving less than 1% drinkable.  Less than 1% . . . and this figure doesn’t take into account fresh water that has become polluted. No wonder a third of the world’s population suffers from water shortages! Furthermore, water shortages are only projected to get worse over the next 15 years, when almost two-thirds of humanity will not have enough water. Two-thirds!  offers the best opportunity in water investing because of its exploding need for potable water to satisfy its huge population and industrialization efforts.

The Has a Drinking Problem

The is certainly not immune from the global water shortage. It’s common knowledge that the is in trouble. The TV news magazine 60 Minutes has run a story entitled “California: Running Dry” discussing the crisis. has enacted comprehensive water legislation to promote conservation and upgrade water infrastructure. A key part of the bill is an $11 billion bond issue that will be used to pay for infrastructure upgrades. Much of this money will go to water utilities.

C is far from alone. According to the U.S. Government Accountability Office, 36 states expect to suffer from water shortages. Lake Mead, which provides water to and , could run dry by 2021 and the Southeast U.S. (including ) is also in trouble. In 2008, the Environmental Protection Agency estimated that $485 billion is needed nationwide to build and upgrade water infrastructure systems.

Water Utilities are the Solution

Cash-strapped governments are likely to solve the water infrastructure crisis by selling off municipality-owned systems to investor-owned utilities. According to Roger Conrad, such distressed deals are “money in the bank”:

They buy, make upgrades and then file for rate increases, which in turn increase revenue, earnings and dividends. And as water rates nationwide are still proportionately well below electricity and telephone rates, increases tend to be non-controversial.

Bottom line: Water shortages are the problem and water utilities are the solution. Those that own drinkable water assets sell a product that is in high and ever-increasing demand. These utilities are paid a regulated but very healthy return on their investment (i.e., their rate base) to do so.  In fact, some utilities – including those in like American States Water – are being paid not to sell water as part of state conservation programs.  Water utilities are also being paid to upgrade their distribution networks to improve efficiency (e.g., less leaks). What a great business! Governments want water utilities to succeed and it’s always good to own a business that has the government on its side.

Recent Outperformance is Just the Beginning

The market in its uncanny wisdom has already begun to recognize the privileged position that water utilities hold in the economy. Over the past three years, an index of water stocks has outperformed the S&P 500 by almost 15 percentage points (63.1% vs. 48.2%):

Water utilities did not just substantially outperform the S&P 500; they also outperformed electric utilities, a similarly “safe” sector, by even a larger margin of 17%:

This suggests that water utilities did not outperform the general market simply as a flight-to-safety trade during the recent financial crisis, but that the water industry is enjoying a secular growth story all its own.

Don’t Take My Word For It – Ask Southwest Water

It’s one thing to present an investment thesis as to why water utilities should perform well and it’s quite another to see it play out in the marketplace. Talk is cheap but cash is king.

A couple of years ago in March 2010, Southwest Water — another California utility – announced that it had accepted an $11 per share all-cash takeover offer by a private consortium led by JPMorgan Chase (NYSE: JPM). The offering price constituted a 56% premium over the stock’s $7.07 closing price on the day prior to the announcement.

The Southwest Water takeover value was a signal that the water industry was generally undervalued. At $11 per share, Southwest Water sold for a lofty 2.2 times book value and a low 1.9% dividend yield. That is a much higher valuation than many other water utilities traded for at the time. The reason the private consortium was able to pay a high price was because it knew it had the market power to raise water rates substantially to captive ratepayers. Just look at Southwest’s Texas service area where water rates have more than doubled with further rate increases scheduled for 2013. Since its acquisition in 2010, valuations of other water utilities have increased closer Southwest’s takeover price, but some investment opportunities in the sector still exist:


Oh, yeah, I promised to tell you which company has increased its annual dividend for more consecutive years than American States Water. The answer is Diebold (NYSE: DBD) (59 years). 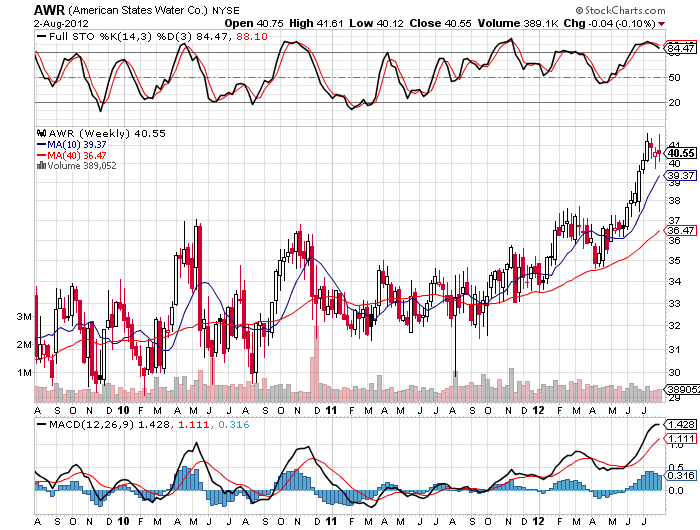