Country roads, take me home,
To the place where I belong,
West Virginia, mountain mama.

Monday afternoon’s mine explosion at the Massey Energy Company (NYSE: MEE) Upper Big Branch mine in West Virginia has killed at least 25 people and is the worst mining disaster since 1984.  President Obama has sent his “deepest condolences, thoughts and prayers to the families and friends of workers who lost their lives” and everyone here at KCI Investing and InvestingDaily.com certainly share the President’s sentiments.

At market close on Tuesday, Massey’s stock was down almost 11 ½ percent on the news, as investors anticipate the negative effects of the tragedy that are almost sure to follow:

The severe price drop in the stock resulting from the tragedy prompted me to take a closer look at Massey.  As with most potential investments, there are both positives and negatives.

Most important to me is the bullish view toward coal of KCI’s own Elliott Gue, editor of The Energy Strategist investment service. Nobody knows the energy markets better than Elliott and he is rip-roaring bullish on coal right now. In fact, “king coal” is one of his top investment themes for 2010. In a recent issue of his newsletter, he wrote:

Coal is far and away the world’s most-important source of electric power and has been for decades. Coal has been the fastest growing fossil fuel over the past five years. And thanks to widespread use in developing countries, coal demand is projected to grow at nearly twice the pace of oil for the next two decades. Coal accounts for 70 percent of electricity generated in India and closer to 80 percent of China’s electricity. There are two good reasons for this: Coal is more abundant than oil or gas, and it’s cheap.

Massey is the largest – and lowest cost — coal producer in the Central Appalachian (CAPP) region, which is ideally located near the heavily-populated East Coast population hubs. The closer coal is to end-user demand, the lower the transportation costs, which makes coal pricing more competitive. That’s the good news.

The bad news is that the CAPP region is the oldest and highest-cost mining area in the U.S., so lower-cost coal from the Western U.S. is making some inroads despite the CAPP region’s transportation advantage.  Although Elliott has called Massey “an outstanding company” with a “sterling financial position,” it has never been one of his favorites because of its heavy exposure to the CAPP region and its reliance on lower-quality and lower-margin thermal (a.k.a. steam) coal, which is used here in the U.S. by utilities to generate electricity. In fact, over 75% of Massey’s production volume is thermal coal, which is primarily consumed in the U.S. and is currently suffering from low demand.

That’s too bad, because Elliott prefers coal companies that specialize in higher-margin metallurgical coal, which is used to produce steel. Emerging markets led by China and India are exhibiting huge demand for metallurgical coal as they produce more and more steel to build out their countries’ infrastructures. In fact, Australia’s BHP Billiton (NYSE: BHP) recently was able to raise the price of the metallurgical coal it sells by a whopping 55%!

Massey Energy Is Trying to Transform Itself

Massey has recently made great strides to increase its metallurgical coal business.  Just last month, Massey announced it was acquiring rival coal producer Cumberland Resources for $640 million in cash and $320 million in stock. About half of Cumberland’s coal reserves are of metallurgical quality, and Massey projects that the acquisition will help the company double its metallurgical coal production by 2012. Unfortunately, Massey felt the need to offer 8.5 million shares at a price of $49.75 to help pay for the acquisition, thereby diluting its stock by 10%.

No analysis of Massey would be complete without discussing Don Blankenship, Massey’s CEO.  He is a kook who sounds a lot like a paranoid Richard Nixon. In a November 2008 speech, he called reporters at the Charleston Gazette (the local West Virginia newspaper) his “enemies” who are “communists and atheists.” He compared Gazette editor James Haught to Osama Bin Laden. Environmentalists are “crazy greeniacs.” Global warming is a “hoax.” He opposes any effort at energy conservation, saying that it will result in the end of democracy in America:

Turn down your thermostats? Buy a smaller car? Conserve? I have spent quite a bit of time in Russia and China, and that’s the first stage. You go from having your own car to carpooling to riding the bus to mass transit. You eventually get to where you’re walking. You go from your own apartment and bathroom to sharing kitchens with four families. That’s what socialism and the elimination of capitalism and free enterprise is all about.

Blankenship may be a wacko, but he is right about one thing: many people dislike him intensely for his horrible environmental and worker safety records. A writer at Grist.org, a Seattle-based environmental e-magazine, chose Blankenship as “the scariest polluter in the U.S.,” calling him a “really bad dude” and “evil.” In the fall of 2005, Blankenship wrote a memo to his employees telling them that maximizing coal production was more important than spending time constructing things like support beams or ventilation shafts:

If any of you have been asked by your group presidents, your supervisors, engineers or anyone else to do anything other than run coal (i.e., build overcasts, do construction jobs, or whatever) you need to ignore them and run coal.

According to the Washington Post, since 2005 the U.S. Mine Safety and Health Administration has cited Massey’s Upper Big Branch Mine for 1,342 safety violations totaling $1.89 million in fines.  And in seven of the past ten years, the mine recorded an injury rate worse than the national average.

One of the reasons the mine remained unsafe is that it was non-union, so miners had no power to insist on safety precautions. In fact, only 3% of Massey’s entire workforce is unionized. Blankenship is a notorious union buster who earned his reputation in 1984 presiding over a bitter and violent miner strike that lasted 15 months.

Regarding the environment, in 2008 Massey agreed to pay a $20 million fine to the Environmental Protection Agency in settlement of at least 4,500 violations of the Clean Water Act. The EPA charged Massey with dumping coal slurry runoff from strip mining into groundwater and several rivers in West Virginia and Kentucky. In fact, Massey is a leader in mountaintop removal mining (MTR), which requires the blowing up of mountaintops to access coal beds underneath. MTR mining has terrible environmental effects, both in terms of destroying natural beauty and poisoning human health.

Lastly, Blankenship has attempted to buy influence on West Virginia’s Supreme Court. He wined and dined then-Chief Justice Elliot “Spike” Maynard on the French Riviera while the appeal of a $76 million jury verdict against Massey was pending before the Court. Blankenship also raised over $3 million for the election campaign of Justice Brent Benjamin, who ended up casting the deciding vote in favor of reversing the jury verdict (that is, until the U.S. Supreme Court overturned the court’s decision based on Benjamin’s conflict of interest). Who could possibly think that electing judges – rather than appointing them — is a good idea?

Invest Only in Companies With Honest Management

One can argue that a CEO’s character is irrelevant  to whether she can generate strong returns for her company’s shareholders, but I disagree. I don’t want to own a stock that engages in dirty tricks. If a CEO doesn’t care about her employees’ safety, the health of the public, the natural beauty near company mines, or the integrity of the judicial system, chances are she doesn’t care about the welfare of her shareholders, either.  I’m a firm believer in what goes around, comes around. Blankenship’s actions over the years may have maximized Massey’s earnings in the short term, but they have exposed Massey shareholders to massive litigation risk in the long term. Society will exact its revenge against Massey one of these days through a jury verdict so large that it will dwarf whatever unjust enrichment Blankenship has managed to accumulate for Massey.

Because I want honest management, count me out as a potential investor.  And based on insider trading data, Blankenship isn’t showing much confidence in Massey’s future either. Since August of last year, he has sold 392,000 shares of Massey, reducing his holdings by more than half.

Elliott Gue doesn’t like Massey Energy either, but he is a huge fan of the coal industry generally and has isolated three of his very favorite coal stocks in his Energy Strategist portfolios. To find out the names, try The Energy Strategist risk free today! 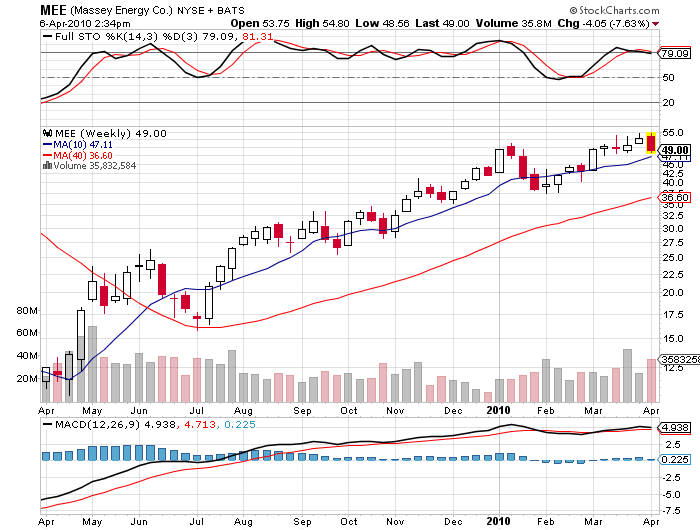