Video Games and the U.S. Supreme Court: Violence is the True Obscenity, Not Sex

This past Monday, the U.S. Supreme Court agreed to hear an appeal from a 9th Circuit Court of Appeals decision striking down a California law prohibiting the sale of violent video games to minors (under 18).  The Supreme Court’s decision was surprising, given that lower courts had consistently and uniformly declared such prohibitions unconstitutional on First Amendment free-speech grounds.  In fact, in the Entertainment Software Association’s (ESA) most recent annual report, the industry group boasted that it had a perfect 43-0 record in fighting against such proposed restrictions becoming law during its 2009 fiscal year.

Traditionally, the Supreme Court only reviews cases where there have been split decisions among Circuit Courts that need to be harmonized. The fact that the Court took this case despite lower court uniformity hints that at least some justices may be willing to make new law and remove violent content from First Amendment protection.

Background on the Video Game Law

The law not only prohibits sales of violent video games to children under 18, but also requires that each violent video game be labeled with a two-inch by two-inch solid white “18” outlined in black. Such a label would be twice as large as the current age-based labels voluntarily provided by the video game industry via its Entertainment Software Rating Board (ESRB). The law imposes a $1,000 fine for each violation (i.e., sale to minor or no label).

A “violent video game” is defined as one that allows the player to engage in killing, maiming, dismembering, or sexually assaulting an image of a human being. But merely killing a human being is not enough; otherwise any war game or act of self-defense would qualify. Consequently, in addition the act of killing must involve torture or:

The law states that such games increase the likelihood that a child will commit violent acts, exhibit aggressive anti-social behavior, and/or suffer psychological harm.

Reasons the 9th Circuit Struck Down the Video Game Law

The 9th Circuit (which handles federal court appeals from ) struck down the law as unconstitutional for three main reasons. First, Supreme Court precedent has only permitted free-speech restrictions against the sale of material to minors that involve “obscenity” and obscenity has been limited to sexual activity. Violence has never been included within the Court’s definition of obscenity.

Second, the state of did not provide clear and convincing evidence that violent video games cause minors psychological harm. Many of the studies cited expressly stated that all they were demonstrating was a correlation between violent media exposure and behavioral problems in children; causality could not be proven. One of the state’s main sources of evidence was Psychology Professor Craig Anderson of , but even he admits that “the research literature on video games is sparse.” In addition, there are academics like Literature Professor Henry Jenkins of MIT that disagree with ’s findings.

Third, the state did not explain why the current ESRB ratings system was inadequate to protect minors and needed to be replaced.

ESRB Video Game Rating System: The Only Thing that Matters is the M Rating

The ESRB rating system is composed of age-based symbols and content descriptors. According to its website, there are six rating levels for video games:

Everyone (E): Ages 6 and older. Contains minimal cartoon, fantasy or mild violence and/or infrequent use of mild language.

The rating level causing all of the problems is Mature (M), which contains “intense violence” but is available to children under 18. Maybe it’s just me, but it seems that the video game industry could save itself a lot trouble by simply increasing the age of M-rated games one year from 17 to 18. I can’t believe that its business model would suffer much from making kids wait one additional year to buy M-rated games. Then again, the industry has never lost in court, so why should it compromise at all?

This past December the Federal Trade Commission released a report to Congress on violent media and noted that 87% of consumers with children who play video games are aware of the ESRB system, and 76% check the rating every time or most of the time when buying and renting games. The report concluded:

How the Supreme Court Should Rule: Make Love, Not War

Focusing obscenity on sexual activity and not on violence makes absolutely no sense. Why is this country so hung up on sex? It may be a vestige of ’s Puritan anti-sex heritage. Whatever the reason, Tiffany Field, director of the Touch Research Institute at the , has determined that lack of physical affection increases violence:

Violent children/adolescents come to experience these problems in part because they are lacking verbal and physical intimacy with peers and parents or other adults.

Similarly, neuropsychologist James Prescott of the National Institute of Health wrote 35 years ago:

The reciprocal relationship between pleasure and violence is such that one inhibits the other; when physical pleasure is high, physical violence is low. When violence is high, pleasure is low. This basic premise provides us with the tools necessary to fashion a world of peaceful, affectionate, cooperative individuals.

Bottom line: I hope that the U.S. Supreme Court decides to include extreme violence in the definition of obscenity for minors and upholds the law. Our society doesn’t need any more Columbine tragedies. Even better would be if the Court were to remove from the definition of obscenity for minors images of consensual sex, but I’m not holding my breath on that one.

The Affect on Video Game Makers Would Be Minimal

Of the $20 billion in annual sales of video games, only about 27% comes from children under the age of 18.  Furthermore, as I mentioned earlier, M-rated video games are already limited to children 17 or older, so the law would only restrict M-rated video game sales for one additional year. I think video game makers can handle that small loss of sales. Furthermore, there may not even be a loss of sales because kids between the ages of 17 and 18 would still purchase video games, but substitute less violent games for the ultra-violent games they are purchasing now. And there are plenty of video games that are both fun and educational.  Studies have shown that certain video games (not the violent ones) can actually promote learning and increase health.

So, if you want to invest in video game stocks, don’t let this Supreme Court case dissuade you. It’s not dissuading Carl Icahn, who has accumulated a 11.6 million share stake (13.7% interest) in game maker Take-Two Interactive Software (NasdaqGS: TTWO). Talk about ultra-violent: they don’t get much more violent than Take-Two’s Grand Theft Auto. Looking at the universe of video game stocks, however, Take-Two looks more like a special situation than a long-term profit powerhouse: 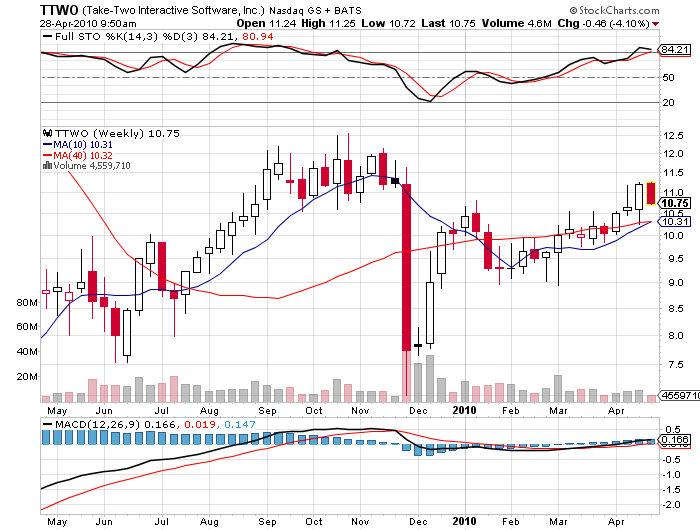