Intel’s “Great” Earnings Are the Beginning of the End

Yesterday (Jan. 13th), semiconductor manufacturer Intel (NasdaqGS: INTC) released its fourth-quarter financial report and both earnings and revenues were the best in company history. Full-year earnings and revenues were also the best in company history. Furthermore, the record quarterly earnings blew away analyst estimates by more than 11%. To top it off, Intel issued guidance for the first quarter of 2011 that was way above analyst expectations. Intel CEO Paul Otellini summed up the blockbuster report by saying:

Our fourth quarter results represent the third consecutive record quarter for the Company and bring to a strong close the best year in Intel’s history. Revenue was up 24% for the year, and we crossed over the $40 billion mark for the first time ever. We exceeded previous records for gross margin, operating income, and earnings per share as well.

Rhetorical Question: If Intel’s future is so great, why is Intel’s stock trading down this morning?

The answer is not that Intel’s stock ran up in front of the report; the stock closed yesterday at $21.29, below the price it was selling for in mid-December. Nope, the real answer is that the stock market – perhaps subconsciously – realizes that Intel’s business fortunes are peaking and its best days are now behind it.  How can you trust CEO Otellini’s projections for 2011 when, during the conference call, he says sales will be up 20%, only to be corrected by CFO Stacy Smith who says sales will only be up 10%? It was not a confidence-inspiring presentation.

If you dig down into Intel’s fourth-quarter results, one finds definite signs of weakness. The personal computer (PC) segment had flat revenues, as did the “Atom” microprocessor (smartphone) segment.  In fact, CFO Smith expressly stated that the company saw “continued softness” from retail consumers, weakness that started during mid-2010 as a result of the European debt crisis.

Internet Server Chips For Corporations Was the Only Bright Spot

The only segment that did well was the Data Center Group (up 15%), which refers to Intel’s “Xeon” server chips used by corporations involved in the Internet backbone infrastructure. The growth in social networking throughout the world (thanks to Facebook) shows no signs of slowing down. Furthermore, the move away from desktop applications and towards web-based “cloud computing” places further strains on Internet capacity. As Intel CEO Otellini pointed out in the conference call, Internet usage is exploding:

In 2010, total traffic crossing the internet was roughly 245 exabytes. This is greater than all the previous years combined. Over the next five years a billion more people will join the global online community, with 15 billion new connected devices including PCs, smartphones, tablets, embedded devices and smart TVs.

We estimate this will increase the data footprint across the Internet to over 1,000 exabytes, more people, more devices, more usages. This dynamic will require high-performing servers from Intel for years to come.

True enough, but the flipside of cloud computing is that personal computers (both desktop and laptop) are becoming obsolete. This is a big problem for Intel because its PC segment is by far its largest segment, comprising about 75% of its operating income and revenues. In contrast, Internet infrastructure “Xeon” chips are only about 20% of its business and the smartphone “Atom” chips are flea-sized at less than 4%. Even at high growth rates, Intel’s data center and Atom segments won’t compensate for the erosion in Intel’s core PC business.

Future PC erosion is certain. Think about this: smartphones in 2012 will have four 2.5-gigahertz processor cores and exhibit about the same computing performance as a current business laptop. That’s next year!

The undisputed leader of smartphone chips is ’s ARM Holdings (NasdaqGS: ARMH). ARM’s chip designs are used in 95% of the world’s mobile phones and more than a quarter of all electronic devices. I say “chip designs” rather than “chips” because ARM’s business model is based on licensing its technology, not on manufacturing the chips themselves.

If Intel thinks that its Atom chips can break ARM’s stranglehold on the smartphone market, it is being delusional. Intel’s strength is in developing the fastest, most powerful microprocessors. That strength is not applicable to smartphones. ARM’s chip technology may not be the absolute fastest, but it is fast enough for smartphones and the applications needed by the average consumer (which is a much bigger market than corporate enterprise).

What ARM brings to the table is its technological expertise in low-power chips, a technology that Intel has never been good at and continues to struggle with. Why is low power important? Microprocessor chips are the brains of a computing device. As the brain, they are always working and generating heat. Small computing devices lack the space to provide their microprocessor chips with fans or other cooling mechanisms. Heat buildup can be very damaging. The chips themselves must stay cool enough on their own; otherwise, the chips will burn out and the device won’t work.

High-performance chips that are able to work on low power generate less heat and don’t burn out. In other words, for smartphones and other small devices, thermal design is more important than computing power. As Pete Hutton, a vice president of technology and systems at ARM, recently stated in a somewhat condescending manner, Intel simply isn’t good at thermal design:

Intel has been talking about low-power for years, and we have been looking at them for years. I am sure that given enough time, be it five years or 10 years, they will get the power issue right.

ARM Holdings is Expanding Into PC and Server Chips

ARM chips sell for between $1 and $20 apiece, while the price of Intel’s chips range from $30 to $1,000. Seems to me that ARM Holdings wins on price. Ok, ok, perhaps Intel’s chips are pricier because they are currently more advanced and focus on the upper-end PC and server markets. But the technology for low-power smartphone chipsets is evolving, and ARM is combining several simple “embedded” chips together in such a way that the performance disparity with Intel’s “all-in-one” chips is narrowing. In other words, ARM’s smartphone chips may soon be used to power things other than smartphones.

ARM Holdings is not forfeiting any upper-end markets to Intel. First, it is partnering with video-chip powerhouse NVIDIA (NasdaqGS: NVDA) to squash Intel’s dominance in PCs. Microsoft (NasdaqGS: MSFT) recently announced at the Consumer Electronics Show (CES) in Las Vegas that it would develop a version of its next PC operating system — Windows 8 — for ARM chips. The “Wintel” (Windows and Intel) duopoly has been destroyed forever!

Second, ARM Holdings is also entering the server market. There is no place for Intel to hide. At the risk of sounding like a shill for ARM Holdings, let me end with a quotation from ARM co-founder Hermann Hauser on why Intel is doomed:

The reason why ARM is going to kill [Intel’s] microprocessor is because Intel has the wrong business model. People in the mobile phone architecture do not buy microprocessors. So if you sell microprocessors you have the wrong model. They license them. So it’s not Intel vs. ARM, it is Intel vs. every single semiconductor company in the world.

There is no case in the history of computing where a company that has dominated one wave has dominated the next wave and there is no case where a new wave did not kill the previous wave — as in obliterate them. The people that dominate the PC market are Intel and Microsoft.

If you have any doubt that smartphone chips are the future, go ask former Advanced Micro Devices (NYSE: AMD) CEO Dirk Meyer. He “resigned” (i.e., was forced out) on Monday (Jan. 10th) because AMD’s board of directors thought he was moving too slowly to enter the market for smartphone chips. 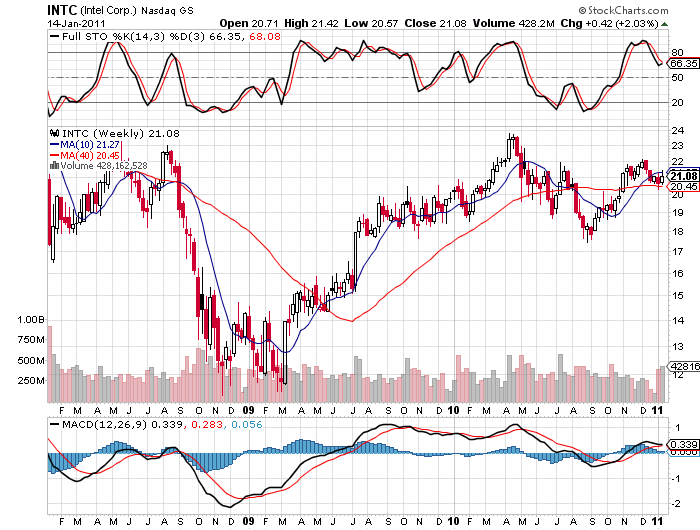 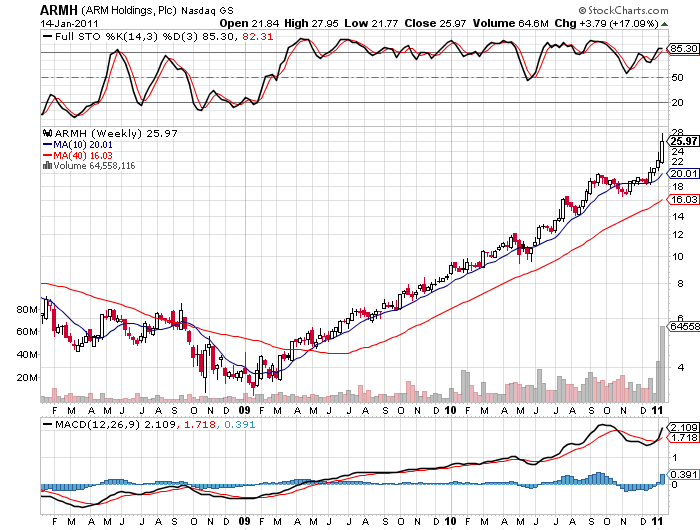