A combination of factors, including aggressive discounting and new products, have helped competitors chip away at Cisco’s dominant position within the industry. But what characterized Cisco in the beginning — responsive innovation — will enable it to recover its footing over the course of 2011 and into 2012.

The reasons for the stock’s miserable performance over the past few years are clear. CEO John Chambers has screwed up big time, diversifying away from the company’s core strengths in the corporate enterprise market and wasting money investing in low-margin and highly-competitive consumer devices. While Cisco was taking its eye off the enterprise-market ball, competitors such as Juniper Networks (NasdaqGS: JNPR), Hewlett-Packard (NYSE: HPQ), Riverbed Technologies (NasdaqGS: RVBD), and Aruba Networks (NasdaqGS: ARUN) were attacking and stealing market share in switching and wireless networking.

Cisco Systems’ Ship is Being Turned in the Right Direction

The silver lining of this mess is that CEO Chambers finally “sees the light” and is moving in the right direction, re-focusing on the company’s core strengths, cutting costs, and jettisoning low-margin businesses. Among the tough decisions was shutting down the Flip video consumer business and considering the sale of the home wireless router business, Linksys. This past May, in the conference call following Cisco’s third-quarter earnings report, Chambers finally admitted what everybody already knew: Cisco’s long-term goal of 12% to 17% annual earnings growth could not be achieved in the current competitive environment. But he also announced that a plan to cut operating expenses by $1 billion in 2012, which will help profit margins next year.

From a purely chart-reading technical standpoint, the stock breaking to a new eight-year low price this past Tuesday suggests even lower prices ahead. But technical analysis is pretty useless in a vacuum and I will venture to say that Cisco has, in fact, finally bottomed. Three months ago when I wrote Cisco Systems Disappoints Investors Again, Cisco was trading at $17 and I said:

Tough times lay ahead for Cisco and I doubt the stock price has bottomed. Investors need more time to discount yesterday’s bad news into the stock price. That said, most of the damage has been done, and I wouldn’t be surprised to see the stock bottom soon.

Since then, the stock proceeded to fall an additional 20% (helped along by the recent market crash). But something wonderful happened yesterday (Aug. 10th); Cisco released its fourth-quarter earnings report and it was the first good one in a long while. The stock has skyrocketed almost 17% today (Aug. 11th) on the news.

The company reported both earnings and revenues that blew past analyst’s estimates. Granted, Cisco has beaten estimates in each of its past five quarters, but those previous four quarterly beats always included reduced forward financial guidance that caused the stock to decline. Yesterday’s quarterly report was the first one in a long time to have upbeat forward guidance:

During periods of uncertainty, customers value companies with a strong balance sheet, existing strong relationships with these customers and one that can continue to help them with their innovation.

I was confident that a bottom in Cisco’s stock was coming soon because the fundamentals of the Internet industry are just too strong and Cisco’s position in that industry is one of a leader. In June Cisco released its fifth annual visual networking forecast and it is a stunner: internet traffic is expected to quadruple between 2010 and 2015 after having increased eight times between 2005 and 2010. A quadruple over five years equates to a 32 percent annual compounded growth rate, which is a heck of a lot stronger than the anemic 3% annual growth forecast for the global economy as a whole. In the U.S., the Federal Communications Commission (FCC) has adopted a “national broadband plan” that promises to spend hundreds of millions of dollars upgrading America’s Internet infrastructure to better compete against high-tech foreign countries like South Korea, Japan, Australia, Sweden, Finland and Germany.

This is good news for Cisco because it is the undisputed world leader in computer networking equipment – the equipment that runs the Internet. Cisco’s market share in switches, which are the backbone of corporate local area networks (LANs), is 70% and constitutes 41% of company revenues. Cisco’s market share in routers, which are the backbone of telecommunication carriers’ wide area networks (WANs), is 50% and constitutes 20% of revenues. The remaining 40% of company revenues is generated by collaboration services (e.g., video conferencing, messaging, media analytics, wireless networking) and data center services (e.g., blade servers, data storage, and virtualization software/cloud computing).

Despite all of its market-share losses, Cisco has remained very profitable, generating almost 14% annualized earnings-per-share growth over the past ten years. Return on equity over the past five years has averaged more than 20%, which is excellent and above average. Free cash flow has exceeded earnings every year since 2002, which is an indication of high earnings quality. The company’s balance sheet is rock solid with $27.8 billion in “net” cash and short-term investments (cash minus total debt), which equals $5.05 in cash per share. At the stock’s current price of $16, subtracting out the net cash means that the market is valuing Cisco’s enterprise value at only $10.95 per share. The company earned $1.17 per share in fiscal 2011 (ending July 2011). Divide $1.17 into $10.95 yields an enterprise value-to-earnings ratio of only 9.4 times! That is an amazingly low valuation for the world leader in Internet networking.

With its Q4 2011 financial report indicating that Cisco’s financial performance has stabilized, Cisco’s cheap stock price has finally caught the interest of investors.

Bottom line: I do not believe that last Tuesday’s low of $13.30 will be revisited any time soon.

Find the Best Technology Stocks with the Help of Personal Finance

Elliott Gue of the market-beating Personal Finance investment service still likes Cisco Systems for the long term even after yesterday’s huge price spike in the stock. In fact, he thinks the stock could rise to $23 or higher, which would be a 40%-plus gain from here.  Elliott has proved time after time that he can beat the market on a consistent basis by choosing undervalued stocks such as Cisco.

Elliott’s favorite industry sectors include technology. To find out the specific names of his favorite undervalued growth stocks in technology other than Cisco, try Personal Finance risk-free today! 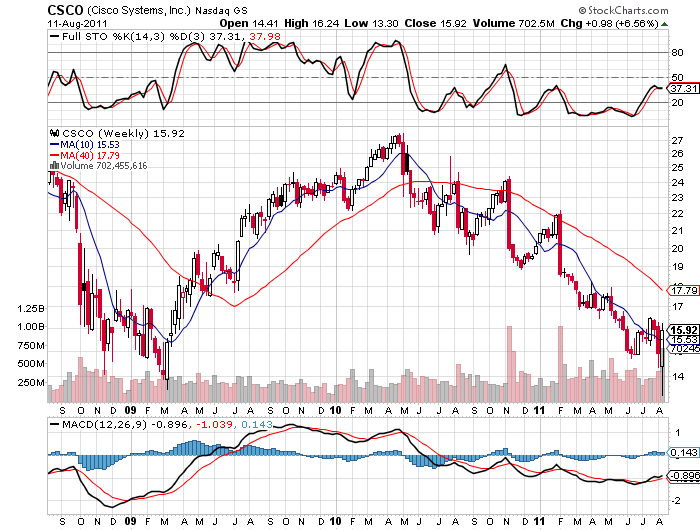