AT&T’s solid second-quarter earnings showed that the company is plenty capable of growing without adding the T-Mobile properties.

Back in March when I wrote AT&T Merger with T-Mobile:Is Efficiency Worth Reduced Competition, I was skeptical that U.S. regulators would approve such an anti-competitive deal. Based on my experience as a telecommunications regulatory attorney, I was convinced that regulators would vote “no” and I was proven right on August 31st when the U.S. Department of Justice (DOJ) filed an anti-trust lawsuit to block the merger. In the lawsuit, the DOJ makes the following argument (pp. 2-3):

AT&T and T-Mobile are two of only four mobile wireless providers with nationwide networks and a variety of competitive attributes associated with that national scale and presence. The other two nationwide networks are operated by Verizon Wireless and Sprint Nextel. Although smaller providers exist, they are significantly different from these four. For instance, none of the smaller carriers’ voice networks cover even one-third of the U.S. population, and the largest of these smaller carriers has less than one-third the number of wireless connections as T-Mobile. Similarly, regional competitors often lack a nationwide data network, nationally recognized brands, significant nationwide spectrum holdings, and timely access to the most popular handsets. Collectively, the “Big Four” -AT&T, T-Mobile, Verizon, and Sprint -provide more than 90 percent of service connections to U.S. mobile wireless devices.

T-Mobile in particular — a company with a self-described “challenger brand,” that historically has been a value provider, and that even within the past few months had been developing and deploying “disruptive pricing” plans — places important competitive pressure on its three larger rivals, particularly in terms of pricing, a critically important aspect of competition. AT&T’s elimination of T-Mobile as an independent, low-priced rival would remove a significant competitive force from the market.

The DOJ evaluates “horizontal” mergers (i.e., mergers that combine companies selling similar goods or services to the same group of customers) based on merger guidelines that rely heavily on a measure of market concentration called the Herfindahl-Hirschman Index (HHI). Market concentration is bad because it means there are fewer competitors and fewer competitors means higher prices. The Obama Administration revised the DOJ merger guidelines in April 2010 to make horizontal mergers more difficult to complete. Chalk up another anti-business regulation to President Obama! The law firm of Davis Polk characterized the merger guideline changes this way:

Overall, the revised Guidelines reflect a pro-enforcement perspective and an effort to blunt various tools that merging parties have used successfully in the past to defeat horizontal merger challenges.  They are consistent with a more activist enforcement policy.

Based on the new merger guidelines, any merger that increases the HHI index by more than 200 points and/or results in an HHI index of 2,500 or more will be presumed to be anti-competitive. In the case of the proposed AT&T/T-Mobile merger, the HHI index would exceed 2,500 in 96% of the nation’s largest cellular market areas (CMAs) and would increase by more than 200 points in 94% of these markets. Overall, the merger would create a national HHI index score of more than 3,100 and increase market concentration by almost 700 points – both of which are well above the anti-competitive threshold (pp. 11-12).

On pp. 13-14 of its anti-trust complaint, the DOJ also cites a smoking-gun AT&T internal document from January 2010 in which AT&T admits that T-Mobile is one of its most important competitors:

The more immediate threat to AT&T is T-Mobile.  The one-two punch of [T-Mobile’s] advanced network and the backhaul required to support the additional data demands should be taken seriously.

Ouch! The Federal Communications Commission (FCC) also piled on AT&T, chiming in that “the record before this agency also raises serious concerns about the impact of the proposed transaction on competition.”

How can AT&T possibly defend itself against this damning evidence of anti-competitive effect? We found out last Friday (September 9th), when AT&T and T-Mobile filed a joint answer with the D.C. District Court where it made the following unsubstantiated assertion on page 3:

Wireless competition is fierce: prices have declined steadily, output is expanding, technological innovation is occurring at an extraordinary pace, and new providers with innovative business models have successfully entered and expanded. All of this will continue, and likely increase, after the transaction.

The Complaint largely ignores the significant competition from established providers such as Verizon Wireless and Sprint, innovative upstarts such as MetroPCS and Leap/Cricket, and strong regional providers like US Cellular and Cellular South, among others. The Department does not and cannot explain how, in the face of all of these aggressive rivals, the combined AT&T/T-Mobile will have any ability or incentive to restrict output, raise prices, or slow innovation. Nor can it explain how T-Mobile, the only major carrier to have actually lost subscribers in a robustly growing market, provides a unique competitive constraint on AT&T.

With regards to the DOJ calculation of an HHI market concentration above 2,500, AT&T merely “denied” the allegation and didn’t provide any opposing HHI calculation of its own. It further stated on page 15 that:

HHI analysis is only one factor in merger analysis, and that a complete analysis must take full account of competitive dynamics and efficiencies not captured by such simplistic calculations.

Note to AT&T: Merely denying the DOJ’s HHI calculation without offering your own is pathetic and lazy. AT&T, you should be ashamed!

With regard to the smoking-gun memo in which AT&T called T-Mobile one of its most important competitors, AT&T merely replied on page 17 that it was “unidentified written material, offered without context” and it was “misleading and inappropriate” for the DOJ to reference it in its complaint. C’mon AT&T, are you seriously claiming that you have no idea what internal memo the DOJ is referencing? AT&T should lose the case on this stupid and disingenuous denial alone.

The federal district court judge in this case is Ellen Segal Huvelle, who has a reputation for ruling in favor of corporations against the government. She may be sympathetic to public policy concerns raised by Roger Conrad, utility expert and lead advisor of the market-beating Utility Forecaster investment service, who recently argued that nixing the deal:

is likely to chill any foreign capital interest in taking a stake in the US wireless, as the implicit message is Uncle Sam may not let you sell in a timely manner.

However, AT&T’s legal response was so devoid of facts and so full of self-serving conclusory statements, that even Judge Huvelle will have a difficult time ruling against the DOJ.

AT&T is on the Hook for a Huge Termination Fee

That said, AT&T didn’t really have a choice but to contest the DOJ complaint given the huge merger termination fee it agreed to pay T-Mobile’s parent Deutsche Telekom (Other OTC: DTEGY.PK) if the deal falls apart. Specifically, AT&T must pay $3 billion in cash and hand over $3 billion to $4 billion worth of wireless spectrum and discounted roaming charges for T-Mobile customers if the deal falls through. The details of the termination fee are referenced in AT&T’s regulatory filing with the SEC as “Annex E”, but I can’t find the actual Annex E to analyze. Suffice it to say that there is significant doubt that AT&T could weasel its way out of paying big bucks to Deutsche Telekom.

This begs the question why AT&T would have agreed to pay such a huge termination fee given the regulatory uncertainty. If AT&T’s regulatory affairs department assured AT&T CEO Randall Stephenson that U.S. regulators would not block the deal, then heads will roll.

Divestiture of T-Mobile Assets May Not Work

There are reports that AT&T may try to salvage the deal by divesting 25% of T-Mobile’s assets if that would satisfy the DOJ’s anti-trust concerns. But it’s unclear what company would buy these assets and whether anybody without its own antitrust problems would have that kind of money or want to devote the time necessary to integrate T-Mobile’s incompatible GSM network into their existing CDMA network. Furthermore, any divestiture sufficient to eliminate antitrust concerns may also eliminate the efficiencies that AT&T wanted to get out of doing the deal in the first place.

Bottom line: I like AT&T’s competitive positioning with or without T-Mobile and I think the stock is reasonably valued and pays a nice 6.2% dividend yield, but I won’t consider investing in Ma Bell until this legal wrangling is over with. 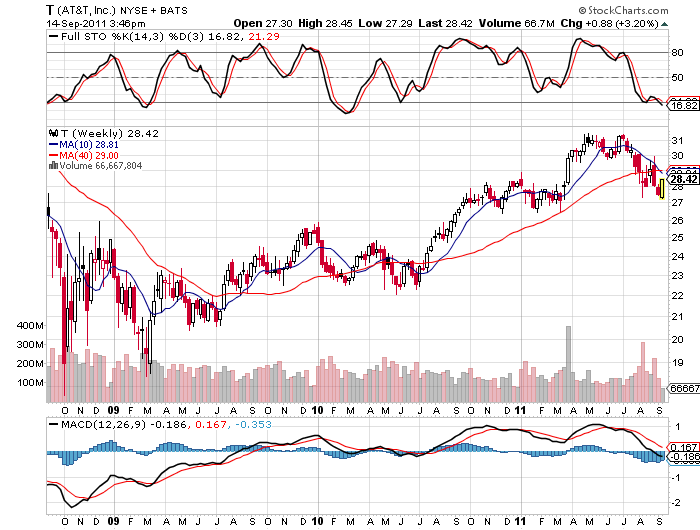