I keep a Post-It note on my quote machine that reads “Accounting Irregularities = SELL” to remind myself of the massive losses caused by cooked books.

Last April, consumer products giant Procter & Gamble (NYSE: PG) announced that it was selling its Pringles brand of potato chips to Diamond Foods (NasdaqGS: DMND) for 29.1 million shares of Diamond stock plus Diamond’s assumption of $850 million in debt. At the time of the announcement, the 60-day average price of Diamond’s stock was $51.47, which was the agreed-upon price basis for valuing the 29.1 million share component of the deal at $1.5 billion. Total consideration for the acquisition, therefore, was estimated at $2.35 billion.

Diamond, whose three main brands are Emerald Nuts, Pop-Secret popcorn, and Kettle potato chips, trumpeted the deal as one that would triple its snack food business, catapulting it into second place in the global snack food market (p. 11) behind Pepsico’s (NYSE: PEP) Frito-Lay division. Adding Pringles would also immediately increase the company’s earnings per share by double-digits and its sales by 150%.

P&G liked the deal because it wanted to get out of low-growth food and focus on its higher-growth household products business. Furthermore, the deal’s “reverse Morris Trust” structure meant that the sale would be tax-free. The company had used the same tax scheme back in 2008 when it sold its Folgers coffee brand to JM Smucker (NYSE: SJM).

Everything good, right? Wrong. Unlike cash, stock prices can fluctuate. Diamond’s stock hit $96.13 in mid-September which made P&G temporarily look like a genius as the deal’s value skyrocketed to $3.5 billion. If you do the math, you actually get $3.65 billion but there was a collar on the deal that reduced Diamond’s debt assumption by $150 million if its stock rose.

But then the chips hit the fan. On September 27th a Wall Street Journal article revealed that the company had paid its Walnut growers a $50 million ”momentum” payment on September 2nd for nuts that Diamond had purchased prior to July 31st – the end of Diamond’s 2011 fiscal year. Since Diamond’s full-year operating income in fiscal 2011 was only $93 million, accounting for this $50 million payment in the company’s 2011 financial results would have reduced full-year earnings per share from $2.61 down to $1.14. Diamond insists the $50 million payment was made for the upcoming 2011 walnut crop and not a retroactive payment for the 2010 crop, but a Barron’s Magazine article talked to some of the Walnut growers paid off and they said they weren’t even providing Diamond with any walnuts in the upcoming year.

Diamond’s management has hired both Los Angeles law firm Gibson, Dunn & Crutcher and accounting firm KPMG to investigate “Walnut-Gate” and determine if the momentum payments were accounted for properly. The investigation will take time and consequently P&G and Diamond announced on November 1st that they had agreed to delay the closing of the Pringles deal until June 2012 from its original closing date in December 2011.

Suspicious Suicide
The plot thickened on November 15th when Joseph Silveira, a member of Diamond’s board of directors who sat on the company’s audit committee, committed suicide. Diamond asserted that the suicide was completely unrelated to the accounting probe, but the timing is suspicious and most analysts have some doubts.  Short sellers had doubts even before the suicide news – as of October 31st, only four out of 1,964 companies in the Russell 2000 Index had a higher level of short selling.

P&G’s Stubborness to Complete the Deal is Curious
Despite this added suspicious wrinkle, on November 28th P&G announced that it remains committed to the deal. My question is why? I’m sure that the merger agreement provides P&G with an “out” for an accounting scandal such as this. Why not just walk away instead of prolonging the uncertainty and subjecting P&G shareholders to a tainted stock?  Furthermore, the deal hinges on some P&G shareholders electing to exchange their P&G stock for Diamond stock. As Louis Meyer, a special-situations analyst for Oscar Gruss & Son, recently put it:

How do you incentivize P&G shareholders, who are used to a nice, stable stock, to take stock in a company that’s had a real eventful history in their stock price? Unless P&G is absolutely desperate to get rid of the Pringles line, they may have to go to Plan B and find another buyer if Diamond can’t complete the deal.

Diamond’s stock has collapsed to $29.30, making the Pringles deal value currently worth only $1.9 billion (as part of the agreement’s collar, Diamond is required to assume an additional $200 million in debt because of the stock drop). Pringles is worth more than $1.9 billion. It is the fourth-largest snack brand (second-largest potato-chip brand) in the world with $1.4 billion in annual sales. It deserves a higher valuation than 1.36 times sales when you consider that Kraft bought Danone’s (Other OTC: DANOY.PK) biscuit operations for 2.3 times sales and Mars paid 3.7 times sales for chewing gum-king Wrigley.

P&G Should Walk Away from Diamond Foods

And who’s to say that $1.9 billion will be the actual figure? If the accounting investigation finds Diamond engaged in fraud, lawsuits will fly (they’re already flying) and Diamond’s stock will be worth much less than the $29.30 it’s trading for now.

Walk away, P&G, just walk away. 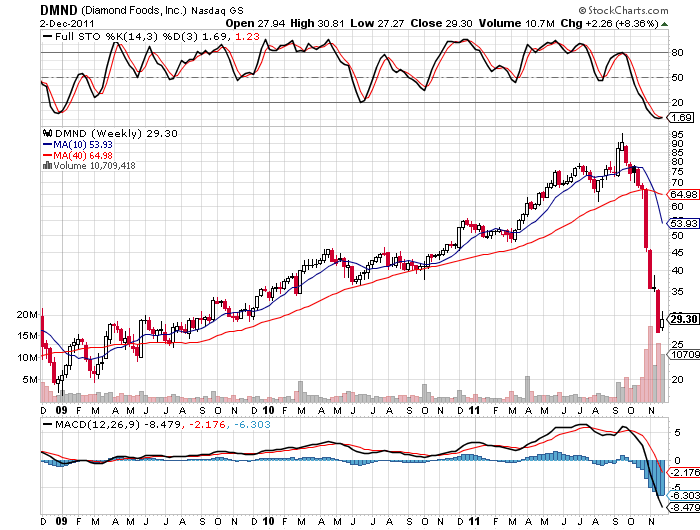