Staffing Companies: How to Profit from Obamacare’s Job Outsourcing

In my never-ending quest to turn the sour lemons of Obamacare into sweet lemonade for Investing Daily readers, I think I’ve hit pay dirt. Specifically, there is a great investment opportunity in staffing companies (more on this later). In my previous article entitled Medicaid Nation, I focused exclusively on healthcare stocks and highlighted those I felt would benefit greatly from increased bureaucracy and a shift from state-of-the-art healthcare to basic care. But Obamacare is so huge and transformative, its effects will be felt far beyond just the healthcare sector; its tentacles of government control and penal taxes will permeate and affect the entire U.S. economy.

Although the individual mandate is an onerous penal tax on the average Joe, there is no multiplier effect. The tax will simply reduce each consumer’s spending (as all taxes do). The part of Obamacare that is much more damaging is the employer mandate because it is a penal tax with a devastating multiplier effect. Not only will it force business owners to reduce their corporate investment, but it will kill job growth as well, which will have the secondary effect of reducing the spending of all of the people whom the mandate renders unemployed rather than earning a paycheck.

Why Obamacare Destroys Jobs and is the True Outsourcer

When you tax employment creation, you end up with less employment. It’s that simple and tragic, especially when one realizes that the U.S. unemployment rate is painfully high at 8.2% even before the employer mandate takes effect in 2014. The hardest hit will be the unskilled workers who can least afford any more misfortune. According to a March 2012 House of Representatives report (page 9):

One-third of uninsured workers (about five million workers) earn less than $3 above the minimum wage. These workers are at significant risk of losing their jobs or being forced into part-time work because of [Obamacare]. The reason: employers are not able to reduce workers’ wages in order to provide the required health insurance. Workers impacted by this provision will be disproportionately young, female, and minorities.

According to the Heritage Foundation — a Washington think tank – Obamacare’s employer mandate will increase the cost of employing a single minimum-wage employee by $3,588 per year. The employer burden is even greater for minimum-wage employees with a family; in that case, the extra cost will be $11,026 per year.

You might think that one way around this problem would be for employers to offer unskilled workers cheaper health insurance with higher deductibles. Think again. Obamacare has a non-discrimination provision that says that if an employer offers health insurance, all full-time employees must be offered the same “minimum essential benefits” and at a cost that is no higher than 9.5% of the employee’s household income. Bottom line: there is no escape for employers of full-time workers.

The only solution is for employers to eliminate full-time employment positions for unskilled workers earning near minimum wage. Since businesses need unskilled workers for certain functions, employers will only offer temporary and part-time positions to these poor workers because temporary and part-time jobs are exempted from Obamacare’s employer mandate provisions. As the House of Representatives report states on page 10:

The employer mandate tax penalty defines a “full-time” employee as someone who works at least 30 hours per week. Part-time employees count toward the 50-person penalty threshold, but businesses do not owe tax penalties on part-time workers (defined as those who average less than 30 hours per week).

Diana Furchtgott-Roth, former chief economist at the U.S. Department of Labor and now a Senior Fellow at the Manhattan Institute, came to a similar conclusion:

If an employer offers insurance, but an employee qualifies for subsidies under the new health care exchanges because the insurance premium exceeds 9.5 percent of his income, his employer must pay $3,000 per worker. This combination of penalties gives businesses a powerful incentive to downsize, replace full-time employees with part-timers, and contract out work to other firms or individuals.

Some businesses could minimize cost by increasing part-time hourly workers, reducing the number of full-time workers, and dropping employer-provided health insurance. Even if businesses choose to offer health insurance to their full-time employees, the Act gives them an incentive to employ more part-time hourly workers than full-time workers in an effort to maximize tax benefits. If Congress leaves these incen­tives in place, the reduction in full-time employment would be costly to the economy.

Not only will full-time jobs be replaced with part-time jobs, but the absolute number of jobs of any kind will go down. According to the nonpartisan Congressional Budget Office (CBO), Obamacare will result in a total loss of 800,000 jobs by 2021.

Is this job-killing law something Americans really want at a time when the U.S. poverty rate has reached its highest level since President Lyndon Johnson’s administration in 1965?

Out-of-Touch Careerist Politicians are to Blame

President Obama has criticized Mitt Romney for outsourcing jobs to foreign countries when he was in charge of private equity firm Bain Capital. This politically-motivated accusation has been completely discredited by independent analysts. Ironically, the real outsourcer of jobs is Obamacare itself.

Why did Obama and the Democrats push through such a job-killing piece of legislation? It’s hard to imagine why, other than the fact that most of the Democratic leadership are careerist politicians who have no private-sector experience and don’t understand how jobs are created. How else can you explain Mr. Obama’s July 13th speech in Roanoke Virginia where he said:

If you’ve been successful, you didn’t get there on your own. You didn’t get there on your own. I’m always struck by people who think, ‘Well, it must be ’cause I was just so smart.’ There are a lot of smart people out there. ‘It must be because I worked harder than everybody else.’ . . . . Let me tell you something: If you’ve got a business, you didn’t build that. Somebody else made that happen.

Somebody else? This disparagement of individual accomplishment and hard work has not only been called un-American, but has alienated many small business owners, including Jack Gilchrist of Gilchrist Metal Fabricating Company in Hudson, New Hampshire. Mr. Gilchrist built his company with his own hands and resents being told that the government built it instead of him.

None of this is good news for the overall U.S. economy, but one industry sector that is primed to benefit from Obamacare’s outsourcing of jobs is the $97.1 billion U.S. staffing industry ($87.4 billion temporary workers, $9.7 billion permanent placement, according to the American Staffing Association). If an employer doesn’t want to pay health insurance for unskilled workers, all he has to do is hire temporary and part-time workers from a staffing company. True, staffing companies face some record-keeping problems (pp. 11-12) of their own under Obamacare, but I believe the increase in business from Obamacare-avoiding employers more than outweighs this increased administrative cost, which can be minimized by reducing the permanent-placement aspect (a small part of the staffing business in any event).

Furthermore, there are demographic forces at work (e.g., the aging of America) outside of Obamacare that promise to grow staffing needs for years to come.

The Aging of America and the End of Retirement

With the advent of the global economy, U.S. business face competitive pressures like never before. Employers are looking for workers with specialized skill sets and need help screening candidates for these skills. The aging of the baby boom generation and the likely retirement of millions of U.S. workers in the next few years puts added strain on companies, which need help retaining existing employees and attracting top talent from a shrinking pool of workers. Companies are increasingly seeking to outsource their human resources administration to staffing companies.

The baby boom generation comprises 78 million American born between 1946 and 1964, and represents nearly half of the U.S. workforce. According to a 2005 report by the Conference Board, a non-profit research organization, approximately 64 million of these baby boomers (more than 40% of the U.S. workforce) will turn 55 within the next decade and be nearing retirement. The first baby boomers to turn 62 (and thus be eligible for social security) will occur in 2008. The peak birth year for boomers was 1960, so they will turn 62 in 2022 and the share of the U.S. population that is 65 years or older is projected to continue increasing until 2040. The bottom line is that the aging of the U.S. workforce means change and lots of it – retirements will result in a lot of job openings that companies will need to fill and they will look towards staffing companies to help fill them.

These millions of baby boomers will help staffing companies in more than one way. Not only will most of them be retiring soon, but they will be looking for part-time jobs. According to a 2005 report by Brightwork Partners, a research consulting firm, about one-third of all “retirees” re-enter the workforce after retirement, most in jobs that require the same skill level as their previous positions. In fact, retirement only lasted, on average, 1 ½ years before they decided to go back to work. But the retirees going back to work said that they wanted flexible work hours – a form of “partial” retirement. According to a 2005 report on older workers by the U.S. Government Accountability Office (GAO), employers are increasingly willing to accommodate older workers because the employers are facing the prospect of a “brain drain” and don’t want to lose the expertise of older workers.

Only about one-third of employers, however, have actually established a program designed to recruit or retain older workers. Combine this fact with findings by the American Staffing Association that only 15% of U.S. companies currently use staffing services in a given year or that only 2% of all U.S. workers are placed through staffing agencies, and the huge opportunity available to staffing companies becomes crystal clear. The growth opportunities for the staffing services industry are also recognized by the Bureau of Labor Statistics, which estimates that staffing companies will grow more than three times faster than the general economy over the next decade.

The top three global players in staffing are Switzerland-based Adecco Group (OTC Markets: AHEXY), U.S.-based Manpower (NYSE: MAN), and Netherlands-based Randstad (OTC Markets: RANJY). Adecco and Randstad have benefitted from the job-killing socialistic policies in Western Europe for many years, but are currently getting hurt from the cascading recessions hitting Eurozone countries because of the European debt crisis. Consequently, I prefer to play this job outsourcing theme via U.S.-based Manpower and smaller U.S. staffing companies that are pure plays on Obamacare (timestamp 1:10).

This investment thesis will take time to play out because the “benefits” provided by the employer mandate to staffing companies’ bottom lines won’t start until the employer mandate goes into effect in 2014. Of course, the stock market will anticipate these benefits prior to 2014, but mid-2012 is probably too early to expect an Obamacare-induced price pop. For patient long-term investors, however, the current depressed stock prices of staffing companies may present a compelling opportunity. 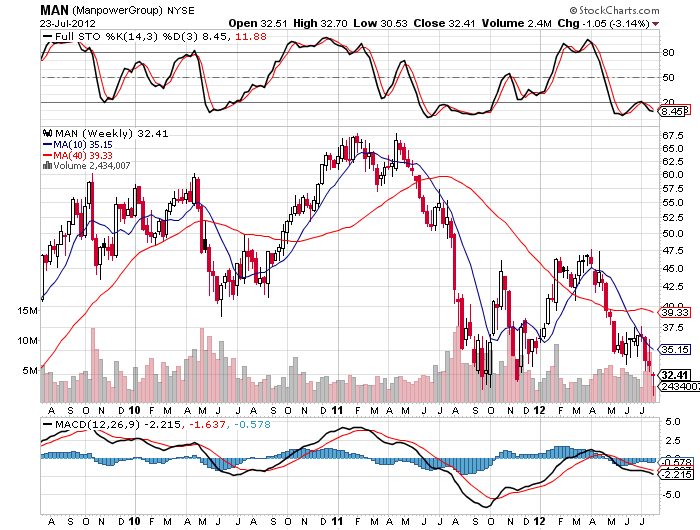