I rarely toot my own horn (the recent “pat on the back” concerning my bearish call on Best Buy (NYSE: BBY) notwithstanding), but I can’t help myself. Over the past three months, I have discussed luxury-goods retailer Fossil (NasdaqGS: FOSL) twice: (1) in a May article discussing the stock’s 38% plunge on lowered European revenue guidance for Q2; and (2) in a June article comparing the company’s business prospects to those of competitor Deckers Outdoors (NasdaqGS: DECK). In both articles, I was bullish on Fossil for several reasons, including insider buying, earnings growth, and lack of interest from short sellers. At the time those bullish articles were published on May 31st and June 25th, Fossil was trading at $73.16 and $74.00, respectively.

To be fair, the stock closed yesterday at $69.79, so my bullishness didn’t look too good as recently as yesterday, but everything changed today with release of the company’s second-quarter financial report. Diluted earnings per share of $0.92 blew away analyst estimates of only $0.78. This 14-cent EPS beat in Q2 allowed the company to raise full-year “adjusted” EPS to a range of $5.29 to $5.34 from previous guidance of only $5.28. Since the guide-up is only in the $0.01 to $0.06 range – less than the Q2 beat — one could actually argue that forward guidance for Q3 and Q4 have been lowered, but the market doesn’t care. Investors loved the fact that the company’s sales growth in both Europe and Asia was strong and Europe didn’t slow down as much as feared given the company’s first-quarter cautionary statements.

Europe Isn’t So Bad After All

Back in May, the company said it was “cautious about the European economy and its impact on our financial results,” and had seen “a softening macro environment toward the end of the first quarter.” Now in August, the company reported:

Across each of our geographical segments we experienced acceleration in wholesale sales growth in comparison to our first quarter of 2012.

I emphasize the word “acceleration” because nobody expected European sales to accelerate in the second quarter!  First-quarter year-over-year sales growth in Europe was 0.7% ($152.9 million vs. $151.8 million), so given the company’s cautionary statements analysts were betting that Europe comps would turn negative in Q2. Instead, Europe’s comps improved to a 4.2% gain ($147.7 million vs. $141.8 million.  As one investment officer characterized the news:

The fear of things collapsing is going away. The recession, which everyone was concerned about a month ago, is not going to happen.

When a company surprises investors this positively after having previously scared the bejeezus out of them, one would expect the stock price to move up big and Fossil did not disappoint. In fact, on Tuesday the stock jumped 33.9% intraday and closed up 31.5%, experiencing its largest one-day gain since its IPO in April 1993.

How much further upside does Fossil have? Interestingly, the top of the trading range on its gap-down day on May 8th was $93.60 and its high price on its gap-up day on August 7th was $93.45. Coincidence? Probably, but given the company’s lowered guidance for full-year 2012 – including a big guide-down for upcoming Q3 – I wouldn’t expect much more in the way of gains until the global economic situation turns positive rather than just stabilizes.

Fossil’s Good News in Europe and Coach’s Bad News in the U.S. Suggest a Rocky Road Ahead

At its current price of $91.82 and expected 2012 adjusted earnings of $5.32, the company’s P/E ratio is not cheap at 17.3, especially given that its operating earnings growth – while positive – amounted to only 2.1% in the just-completed second quarter. Luxury-goods competitor Coach’s (NYSE: COH) recent earnings miss and price plunge (largest price decline in almost 11 years) is a cause for continuing concern regarding the entire sector.

Granted, Coach’s problems focused on “an increasingly promotional environment” in North America and market-share losses to U.S. competitor Michael Kors (NYSE: KORS), but Fossil’s North American exposure is not insignificant at 39% of sales and could be negatively impacted somehow by the aforementioned price competition. Wouldn’t it be ironic if Fossil’s business risk going forward turns out to involve the U.S. and not Europe? Bottom line: investors who jump in now should not expect Fossil stock to return to its April 2012 high price of $139.20 anytime soon.

But for those investors who owned Fossil stock prior to today, a 31.5% one-day gain is quite sufficient, thank you very much. 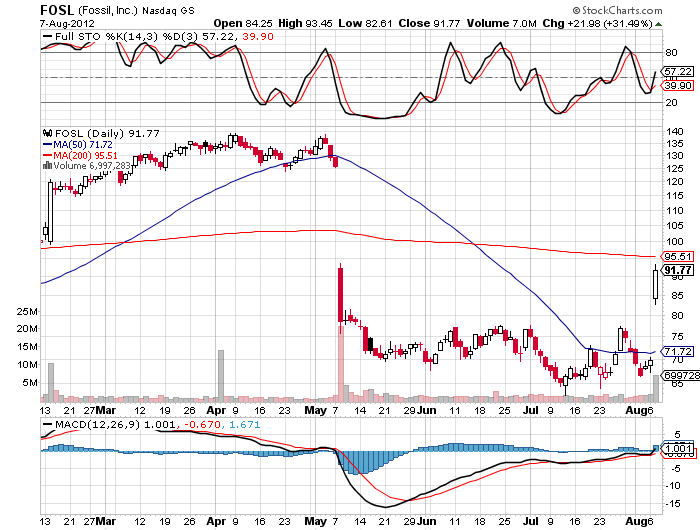