Doesn’t anyone at BP Prudhoe Bay Royalty Trust (NYSE: BPT) read the Wall Street Journal? The reason I ask is that the stock fell 17.8% on Wednesday (Aug. 29th) and was down a cumulative 29.5% since last Friday (Aug. 24th) and yet a spokesman for the U.S. energy royalty trust said that the company knew of “no reason” for the recent selloff. (Since Wednesday, the stock has rebounded 15%, but at $89 it is still down substantially from its April 3rd high above $129).

No reason? C’mon, dude!  All you had to do was read Jason Zweig’s August 24th Friday-afternoon column in the online edition of the Wall Street Journal to understand why the stock is tanking.  Zweig is not only a WSJ columnist, but also the editor of the 2003 annotated version of the 1973 fourth revised edition of Ben Graham’s 1949 value-investing classic The Intelligent Investor, as well as the author of the 2007 behavioral finance book Your Money and Your Brain.

For the record, on Thursday BP Prudhoe Bay amended its “no reason” comment to state that its corporate policy is “not to comment” on unusual market activity. In other words, the company figured out that Zweig’s column was the reason for the price decline but it refused to admit that it knows.

Anyway, Zweig’s Aug. 24th column discussed energy royalty trusts (there are about 25 of them) and the fact that many of these trusts have lost significant value recently in reaction to dividend cuts:

In contrast to these big-time cutters, only the last quarterly distribution of the three paid so far in 2012 has been cut at BP Prudhoe Bay Royalty Trust. Yet the stock has come under severe selling pressure just like the more-frequent dividend cutters.

If not frequent dividend cuts, what’s the real reason for BP Prudhoe Bay’s price decline? Zweig pointed out in his Aug. 24th column something that has been public knowledge ever since the BP Prudhoe Bay Royalty Trust filed its 10-K on February 29th. On pages 19 and 48 of the 10-K, the company noted:

As of December 31, 2011 production of oil and condensate from the proved reserves allocated to the 1989 Working Interests will result in estimated future net revenues to the Trust of $2,460.5 million, with a present value of $1,433.1 million.

The trust has no assets other than the contractual right to this revenue stream and holds no debt. According to Investing Daily energy expert Elliott Gue:

Launched in 1989, BP Prudhoe Bay Royalty Trust is one of the oldest US-listed trusts. The trust is entitled to receive a 16.4246 percent royalty interest in the first 90,000 barrels per day of oil and condensate produced annually from BP’s Prudhoe Bay field on Alaska’s North Slope. The trust has paid a distribution in every quarter since its launch and has no fixed termination date.

BP Prudhoe Bay Royalty Trust is Worth Only $66.97 Per Share

BP Prudhoe Bay has 21.4 million units outstanding. Divide $1.4331 billion by 21.4 million units yields a fair value per unit of $66.97. Once investors realized that the stock they owned was trading at more than $100 per unit but was worth only $66.97, is it any wonder that the stock plunged? What is surprising is not the severe price decline, but rather that it took until now for the stock to plunge back to earth. Apparently, nobody read the company’s 10-K filing and if they did, they completely ignored it.

One reason for investor blindness may have to do with BP Prudhoe Bay’s price momentum and investors’ erroneous expectations that the future will be similar to the past. Over the last nine years, the U.S. royalty trust has been one of the stock market’s best performers, returning 445 percent in price appreciation alone and 1,304 percent including reinvestment of cash distributions. In comparison, the S&P 500 has returned only 40 percent and 68 percent, respectively:

I suspect another reason that the stock has remained so incredibly overvalued is because investors are more concerned with receiving high cash yields and oblivious to long-term cash-flow valuations. In other words, many investors are “yield hogs.” BP Prudhoe Bay current annual cash distribution per unit is $9.25 (9.9 percent yield) but the payout varies considerably with WTI crude oil prices. To view the company’s annual payout history over the last few years, see page 29 of the company’s 10-K.

Not only is 9.9% very high compared to minuscule U.S. Treasury bond yields under 2.0%, but the income received is mostly tax-deferred – similar to master limited partnerships (MLPs). U.S. royalty trusts are classified as pass-through entities that avoid the double taxation suffered by regular corporations and also benefit from something called a “depletion allowance” which treats the cash received by unitholders as a reduction of cost basis rather than taxable income.

Although tax treatment is similar, there is a significant difference between MLPs and royalty trusts. Investing Daily energy expert Elliott Gue has written that – unlike MLPs — U.S. royalty trusts:

In other words, U.S. royalty trusts are “depleting assets” with a high probability of diminishing dividend payouts over time as their revenue-producing properties get used up. Mr. Gue cautions investors not to choose royalty trust based solely on the highest yields because some “high-yielders are slated to terminate in a few years and are suffering from declining production and distributions.”

Even after the recent price decline, BP Prudhoe Bay’s current $89 unit price is still trading at a 33% premium to its $66.97 fair value. Anyone buying the stock at today’s price is betting on the “greater fool theory” of being able to sell the stock to some other oblivious yield hog in the future.

One thing is certain: you don’t want to be left holding the bag when interest rates rise and investors finally focus on the return of their money rather than the return on their money. 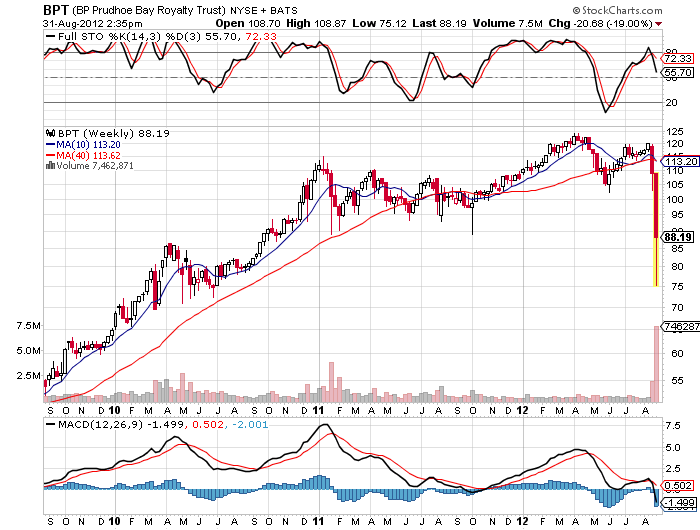