Since it came public at $38 per share on May 18th, social networker Facebook (NasdaqGS: FB) has lost more than half of its value. Is it a buy at its current level of $19? According to valuation expert and NYU Finance Professor Aswath Damodaran, the answer is “almost.” Back in May, Damodaran valued Facebook at $29, but in late August he reduced his fair value estimate to $23.94. Why the 17.4% valuation haircut? Damodaran now projects slower revenue growth and lower profit margins, and continues to voice concern about Facebook’s “absence of a clear business plan” to monetize its nearly one billion users. I’ve written about Facebook’s inability to come up with an effective way to monetize its mobile users. Nevertheless, Damodaran continues to believe that Facebook has “incredible potential.”

Being a good value investor who is humble about valuation estimates and requires a 25% margin of safety, Damodaran wouldn’t buy the stock all the way up to $23.94, but pegs his buy price as $18, which the stock briefly hit on September 4th before rebounding. Even at the current $19 price level, Damodaran says that there is an 80% chance the stock is undervalued.

Although the May IPO only issued 15% of shares outstanding (420 million), it was enough to give Facebook a nice cash hoard of more than $10 billion. With the stock price so low – and very near Damodaran’s $18 buy target — wouldn’t it make sense for Facebook to use some of this cash to initiate a share repurchase?

Facebook’s Share Repurchase is Hidden in an 8-K Filing

The answer appears to be “yes” based on information contained in an 8-K filing from September 4th.  Although the filing does not expressly announce a stock buyback, the company’s decision to pay employee withholding taxes to the federal government with corporate cash acts as a stock buyback. The 8-K filing discusses the October 29th lockup expiration of 225 million shares of restricted stock owned by Facebook employees, which they received over the years as part of their incentive compensation. Just as an employer withholds a portion of cash compensation paid to employees to satisfy federal tax obligations, so too is Facebook obligated to withhold a portion of stock compensation.

In this particular case, the withholding rate is 45% or 101 million of the 225 million shares subject to the lockup expiration. At a stock price of $19, this 101 million shares is worth $1.92 billion. Since the federal government only accepts cash for tax payments, Facebook cannot simply hand over the stock to the IRS – it must convert the stock into cash. Typically, newly-public companies get the cash for the tax payment by initiating a follow-on offering of stock to either institutional investors or the public. For example, six months after going public in May 2011 at $45 per share, LinkedIn (NasdaqGS: LNKD) sold an additional 1.27 million shares at $71.

Facebook could have tried a similar follow-on offering, but instead the 8-K filing reveals that the company plans to buy the 101 million shares itself using cash on its balance sheet. In other words, Facebook just announced a $1.92 billion share repurchase plan! There is something brilliant about selling stock at $38 and buying some of it back six months later at $19. The way to make money trading is buy low and sell high and Facebook is doing just that. I commend Facebook for being a responsible steward of shareholder capital, although I’m sure some buyers in the IPO are fuming mad that the company is able to buy Facebook stock at half the price they paid.

Not all corporate stock buybacks are a wise use of shareholder capital. A January 2012 study by Thomson Reuters looked at stock-repurchase activity by S&P 500 companies over the past 10 years. The study concluded that most stock buybacks are poorly timed and destroy shareholder value. Unfortunately, many companies decide to buy their stock when prices are high and stop buying when prices are low – the exact opposite of what they should be doing!  There are two possible reasons for this bad market timing:

(2)   stock buybacks are made when the cash flow is available regardless of valuation and most cash comes in the door during good economic times when the stock price is already high.

The best analysis of when corporate share repurchases make sense can be found – where else? – in the annual shareholder letters of Warren Buffett’s Berkshire Hathaway (NYSE: BRK-A) (NYSE: BRK-B). Buffett is famous for his opposition to stock buybacks, waiting 40 years before finally agreeing in September 2011 to buy back some Berkshire stock. But in Berkshire’s 1999 shareholder letter, Buffett outlined the criteria management must satisfy before a buyback can be considered “good:”

Repurchases are all the rage, but are all too often made for an unstated and, in our view, ignoble reason: to pump or support the stock price. The shareholder who chooses to sell today, of course, is benefitted by any buyer, whatever his origin or motives. But the continuing shareholder is penalized by repurchases above intrinsic value. Buying dollar bills for $1.10 is not good business for those who stick around.

Many companies now making repurchases are overpaying departing shareholders at the expense of those who stay. In defense of those companies, I would say that it is natural for CEOs to be optimistic about their own businesses. They also know a whole lot more about them than I do. However, I can’t help but feel that too often today’s repurchases are dictated by management’s desire to “show confidence” or be in fashion rather than by a desire to enhance per-share value.

We will not repurchase shares unless we believe Berkshire stock is selling well below intrinsic value, conservatively calculated. Nor will we attempt to talk the stock up or down. (Neither publicly or privately have I ever told anyone to buy or sell Berkshire shares.) Instead we will give all shareholders — and potential shareholders — the same valuation-related information we would wish to have if our positions were reversed.

Please be clear about one point: We will never make purchases with the intention of stemming a decline in Berkshire’s price. Rather we will make them if and when we believe that they represent an attractive use of the Company’s money.

Facebook’s decision to use $1.92 billion in corporate cash to buy 101 million shares of stock at $19 appears to satisfy Buffett’s criteria for repurchasing shares – if you accept professor Damodaran’s intrinsic value estimate of $23.94. Granted, a $19 purchase price is only 21% below the $23.94 intrinsic value and not the 25% discount Damodaran himself requires before buying at $18.

But I don’t think Mr. Buffett would quibble between a 21% and 25% discount. Facebook is buying the stock at a price “well below intrinsic value” and Mr. Buffett should be proud. 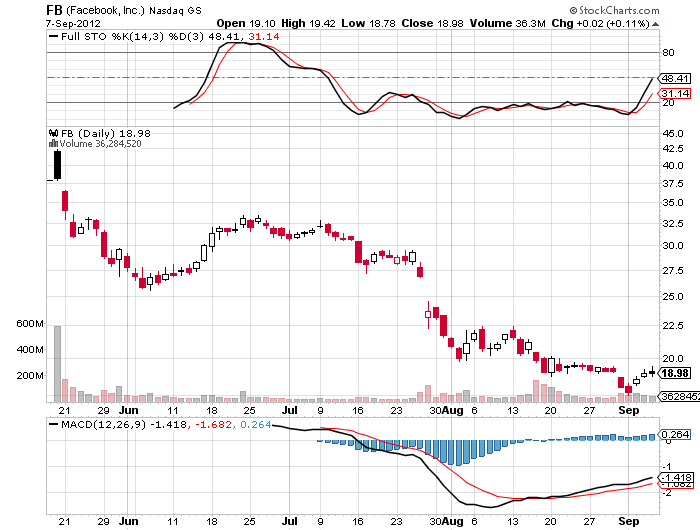