For all the public hatred toward Wall Street in the wake of the 2008 financial crisis, consider this: the U.S. government has now made a $12.4 billion profit on its $182 billion bailout of insurance company American International Group (NYSE: AIG) – the poster child of Wall Street greed. On September 10th, the U.S. Treasury announced that it had sold 553.8 million shares of AIG in a public offering for $32.50 per share. The $18 billion sale reduces the government’s AIG stake to only 21.5% — down from a previous controlling interest of 53.4%. The remaining 317.2 million shares in government hands are just icing on the cake.

This $18 billion share sale by the U.S. Treasury was the fifth since the 2008 bailout and by far the largest – almost equaling the $23.3 billion in total cash received from the previous four share sale, including AIG’s re-IPO. Now that AIG is privately-controlled, Standard & Poor’s is warning of a credit rating downgrade because the company will now become subject to burdensome Federal Reserve regulations (e.g., higher capital requirements, stress tests, and dividend and buyback restrictions) that will make it harder in the future to earn profits and return cash to shareholders, but investors will worry about that another day. Right now, they seem to be celebrating the fact that a huge overhang of government selling is now out of the way.

Granted, the share of the government’s bailout emanating from the 2008 Troubled Asset Relief Program (TARP) remains in the red by about $6 billion (breakeven AIG stock price from TARP alone is $43.53), but when you average the $97 billion bailout from TARP with the $85 bailout from the Federal Reserve, the overall breakeven price is $28.73, which the latest share sale assures. Even if one imposes a 12% cost of capital on the government bailout, taxpayers have come out ahead by about $600 million.

Private-Sector Bailouts are Getting Paid Back

Whether the bailout of AIG was justified or not – especially the government’s ridiculous decision to pay investment-bank counterparties 100 cents on the dollar (page 15) – is debatable, but the fact remains that AIG has been able to repay its bailout in full and this is proof that the private sector’s role in the 2008  financial crisis was limited and manageable. The free market works and should not be over-regulated. Even extending the analysis beyond AIG to the entire TARP bailout program, $342 billion of the $411 billion in total TARP bailout disbursements have already been paid back by private financial institutions – an 83% payback rate that promises to improve further in future years.  If you look beyond TARP to all “financial stability programs,” the government now expects to “at least break even” (page 10).

Government-Sponsored Bailouts are a Disaster

In contrast to private-sector assistance, the financial bailouts of the government-sponsored entities (GSEs) Fannie Mae and Freddie Mac have been humongous disasters that will never, ever be repaid in full. According the Congressional Budget Office (page 11), the cost of the GSE bailouts through March 2011 was $317 billion and climbing, with $42 billion in additional costs expected to be incurred through 2021. The problem is so bad that in August the U.S. Treasury gave up trying to enforce collection of the 10% dividend the GSEs owe on their preferred stock and instead restructured the debt obligation so that the GSEs only have to pay the government any profit they make – which is minimal.

It just goes to show that government is the problem, not the solution. Although the final report of the Financial Crisis Inquiry Commission (FCIC) (page xxvi) refused for political reasons to put the primary blame for the financial crisis on the GSEs, it did concede that Fannie and Freddie had a “deeply flawed business model” and they “used their political power for decades to ward off effective regulation and oversight.” Furthermore, the FCIC report criticized the GSEs for their decision in 2005 and 2006 “to ramp up their purchase and guarantee of risky mortgages, just as the housing market was peaking.” In conclusion, the report stated that the GSEs   “contributed to the crisis” and “their participation in the subprime mortgage market added helium to the housing balloon.” In other words, greed caused Fannie and Freddie to fail and brought down U.S. taxpayers with them.

I think the primary role of Fannie and Freddie in the financial crisis was best described by FCIC board member Peter Wallison of the American Enterprise Institute in his dissenting opinion (page 444):

The sine qua non of the financial crisis was U.S. government housing policy, which led to the creation of 27 million subprime and other risky loans—half of all mortgages in the United States—which were ready to default as soon as the massive 1997-2007 housing bubble began to deflate. If the U.S. government had not chosen this policy path—fostering the growth of a bubble of unprecedented size and an equally unprecedented number of weak and high risk residential mortgages—the great financial crisis of 2008 would never have occurred.

Initiated by Congress in 1992 and pressed by HUD in both the Clinton and George W. Bush Administrations, the U.S. government’s housing policy sought to increase home ownership in the United States through an intensive effort to reduce mortgage underwriting standards.

Blaming the investment-banking psychopaths on Wall Street is tempting, but doesn’t make sense given the almost-complete repayment of private-sector bailout money compared to the black hole of the GSE bailout. If you need further proof, just look at what’s going on in Obama Justice Department and U.S. federal courts.  The Justice Department recently announced that it would not prosecute Goldman Sachs (NYSE: GS) for its role in selling subprime mortgages in the ABACUS affair. Similarly, New York U.S. District Court Judge Paul Crotty recently dismissed fraud charges against Wall Street firms that helped Fannie Mae sell preferred stock but refused to dismiss fraud charges against Fannie Mae’s former CEO Daniel Mudd. With regard to Mudd and other Fannie Mae executives, the judge stated:

Given what defendants knew about low-documentation loans, they must have known that FNMA’s disclosed subprime and Alt-A exposure calculations were materially misleading. Defendants conduct in making, or aiding others that made, these misstatements constitutes an extreme departure from the standard of ordinary care.

Government’s Role in the Economy Should Be Limited to Referee, Not Player

My takeaway: the private sector makes mistakes, but these mistakes are correctable after the fact because private companies are relatively small, are experts at generating wealth, and will be able to provide full compensation to wronged parties. In contrast, when the government meddles in the economy, the mistakes are much larger and destructive and the government doesn’t have a clue how to create the wealth needed to right its wrongs.

If the Washington political elite can learn this free-market lesson from contrasting the results of the AIG and Fannie Mae bailouts, then I will be first in line proclaiming the government’s AIG bailout to have been well worth its initial cost. 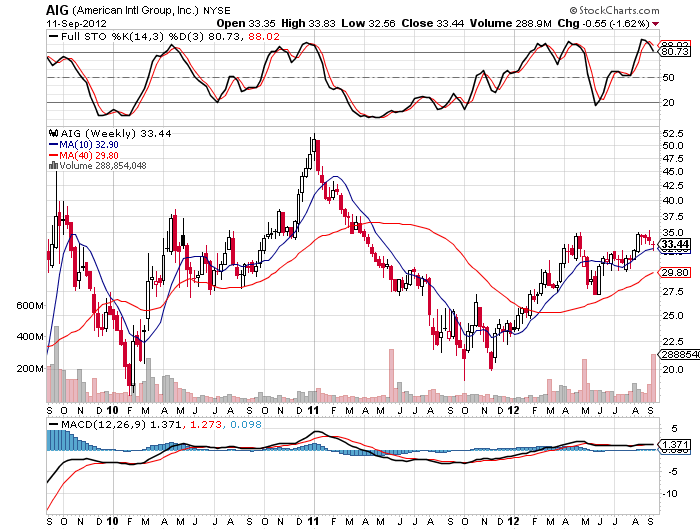