Back in June at Exelon’s (NYSE: EXC) analyst day presentation, CEO Christopher Crane assured investors that the stock’s $2.10 annual dividend was “robust and sustainable” (page 112) and that “this is the right time to own Exelon stock.”

On June 7th when Crane made this buy recommendation, the stock was trading at $37.41. Today (Nov. 2nd), the stock is trading at $32.70. In other words, the stock has fallen 12.6% since CEO Crane said it was a good time to buy the stock. What went wrong, other than the fact that the Exelon CEO is a lousy stock picker?

On the face of it, Exelon’s third-quarter financial report was positive. The company beat earnings estimates by $0.05 per share and increased its guidance for full-year 2012 earnings from a range of $2.55 – $2.85 ($2.70 midpoint) to a range of $2.75 – $2.95 ($2.85 midpoint), a 5.6% increase. In addition, Exelon upped its gross profit margin forecast (slide no. 5) at its unregulated power generation unit for both 2013 and 2014. Keeping tabs on unregulated power profit margins is important because Exelon’s unregulated unit constitutes more than half of the company’s total earnings (68% in Q3). To be fair, the upward revision in unregulated gross margin from its second-quarter forecast (as of June 30th ) is still lower than its forecast at its June 7th analyst day presentation (slide no. 45), but the profit trend is now positive again. Let’s be grateful for small favors!

On the negative side, Exelon’s regulated electric utility in Illinois – ComEd – continues to get screwed by the business-unfriendly Illinois Commerce Commission (ICC) and its left-wing puppet master, Illinois Governor Pat Quinn. Quinn was appointed governor in 2009 after Rod Blagojevich was forced to resign in disgrace. Prior to his state-wide political career, in 1984 Quinn founded the Citizens Utility Board, a consumer watchdog group that spends a large chunk of its time contesting ComEd rate increases. Back in October 2010, I was bullish on Exelon partly due to my hope that Quinn would lose the November gubernatorial election to pro-business Republican  Bill Brady, but Quinn eked out a re-election win. Oh well. In September 2011, Quinn vetoed Exelon’s $3.2 billion plan to construct a smart electric grid throughout Illinois but the following month the Illinois legislature overrode Quinn’s veto and in the same stroke stripped some ratemaking authority from the ICC. Things were looking up for ComEd, but then in May 2012 (and again in an October 2012 re-hearing) Quinn and the ICC  circumvented the will of the Illinois legislature by cutting ComEd’s allowed rate of return under the smart grid plan by $100 million per year.

But this bad news coming out of Illinois in early October is not the reason Exelon’s stock has plunged 8.6% over the first two trading days in November. Investors have dumped the stock because CEO Chris Crane told analysts during the third-quarter conference call that they should start thinking the unthinkable: Exelon may cut its dividend. Yikes! How could Crane reverse course so suddenly after assuring investors just four months ago in June that the dividend was “robust and sustainable?” The answer involves future power prices in 2015 and 2016 and Exelon’s need to hedge these prices through natural gas futures and other mechanisms. Although Exelon expects power prices in 2015-16 to increase by $3-$6 per megawatt hour from the current $41.60 per megawatt hour, the futures markets are not yet pricing in the expected increase, which may force Exelon to hedge 2015-16 power prices at abnormally low prices, and which would reduce cash flow and jeopardize the company’s ability to pay the $2.10 per share annual dividend.

Exelon expects a price recovery because of the likely retirement of over 40,000 gigawatts of coal-plant electric generation in the 2015-16 time frame. Perhaps the futures markets didn’t like the August decision by a federal appellate court to strike down EPA air pollution regulations. There may also be concern that a Mitt Romney victory in the upcoming presidential election would result in the EPA abandoning coal-plant emission regulation altogether.

CEO Crane estimates that if future power prices don’t improve as expected, the company’s current dividend would require a 90% payout ratio of cash flow, which is too high given the company’s desire to maintain an investment-grade credit rating (currently second-lowest investment-grade rating of BBB). Apparently, future power prices plunged in August and experienced an “unbelievable” level of volatility that was not even in the realm of Exelon’s forecasting models. In other words, future power prices experienced a “black swan” price plunge event in August that has scared Exelon management.

In the conference call, Exelon announced that it will defer $2.3 billion of its planned capital expenditures through 2015, which will help bolster free cash flow and dividend sustainability. And CEO Crane said that even if future power prices don’t improve, the company should be able to squeak by and maintain an investment-grade credit rating – which requires a cash flow-to-debt ratio of no lower than 25%. But it appears that the scary August price volatility in the futures markets has caused Exelon management to require a larger margin of safety than it required back in June.

If a dividend cut does come to pass, Investing Daily’s utility expert Roger Conrad foresees a cut no greater than 30%, which would bring the annual dividend down to $1.47, or a yield of 4.5% at today’s depressed stock price of $32.70. Other analysts on Wall Street think the cut could go even deeper to 40% ($1.26 or 3.9%). In either case, I think the stock price has already factored in a worst-case scenario and is a good value at current prices.

Speculators, take note: if Exelon’s forecast of a recovery in future power prices materializes over the next six months as expected – and the current $2.10 dividend is maintained — the stock is an absolute steal under $33. 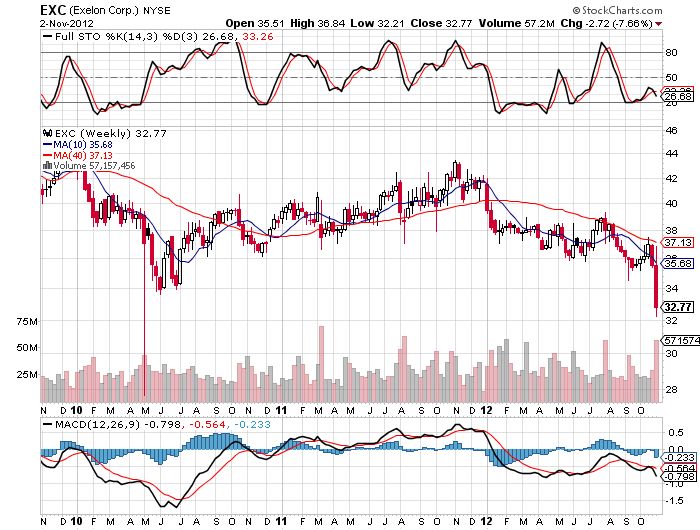