Herbalife is Not a Fraud, But It May Be a Pyramid Scheme

Herbalife (NYSE: HLF), the direct marketer of diet shakes and energy bars, has lost 35% of its value this week on news that hedge fund manager Bill Ackman is shorting the stock. In a Bloomberg interview and in a 343-slide presentation delivered at an Ira Sohn Conference “special event,” Ackman’s attack on Herbalife is the most blistering and hostile I have ever seen a shortseller make, including sound bites like the following:

Wow. Needless to say, Herbalife CEO Michael Johnson did not take kindly to these statements, and retorted that “the United States will be better off when Bill Ackman is gone.” Johnson was the highest-paid CEO among U.S. corporations in 2011, earning $89 million, so he has a lot to lose if Herbalife fails. Ackman told Bloomberg News that Johnson’s retort makes him fear for his personal safety, but I believe that Johnson was merely threatening legal action. Johnson’s point is that U.S. shareholders would be better off if the SEC would not allow short sellers like Ackman to short stock or buy put options and then make slanderous statements in order to drive stock prices down.

If one looks at Herbalife’s financial results and stock-price performance, Ackman’s prediction that the company will fail appears ludicrous. Third-quarter earnings were excellent, showing strong double-digit growth and marking the 15th consecutive quarter where earnings beat analyst estimates. The company also raised its full-year 2012 earnings guidance for the second time in three months. This past July, Herbalife authorized a $1 billion share repurchase program and earlier in February raised its dividend by 50 percent, the third dividend increase in less than two years. The company is very profitable, with a return on equity of 104 percent and return on invested capital of 46 percent. In November, Chief Operating Officer Richard Goudis purchased 69,866 shares worth $3.1 million at an average price of $44.31 per share. This marked the largest insider purchase since the company’s 2004 IPO. Lastly, just this week the company announced that it is spending $130 million to open a new manufacturing plant in North Carolina, which is a sign of financial strength and confidence in future growth.

A company whose financial statements are fraudulent would not have the cash to buy back stock, increase dividends, or open new manufacturing plants, nor would insiders be purchasing millions of dollars worth of company stock. The profits that Herbalife says that it generates are real, so what exactly is Ackman talking about?

Herbalife’s Financials are Not Fraudulent

Reading through Ackman’s 343-page slide presentation, I did not find a single allegation that Herbalife’s corporate profits are fraudulent. Rather, Ackman’s accounting allegations on slide nos. 138-45 are limited to whether royalties paid to distributors should be classified as an “operating expense” or as a “reduction to net sales.” In other words, Ackman concedes that Herbalife accurately represents its corporate profitability but argues that the company misrepresents the proportion of compensation its free-lance distributors earn from retail sales compared to the compensation the company pays them for recruiting new distributors.

Compensation Mix of Independent Distributors is the Real Issue

In contrast, multi-level marketing (MLM) companies are legal even though distributors receive compensation for recruiting new members because legitimate MLM companies sell real products that customers want. The key issue is whether the primary source of employees’ compensation is retail sales of product or payments from new recruits to participate in a money-making opportunity. If retail sales of product are the primary source of compensation, then the company is a legal MLM. If payments from new recruits are the primary source of compensation, then the company is an illegal pyramid scheme. The FTC is active in this area and continues to bring charges against pyramid schemes. For example, in March 2012 a federal judge ruled in favor of the FTC in its lawsuit against a company called BurnLounge. The seller of music albums was ordered to refund $17 million to its distributors and shut down operations.

If you believe Ackman, Herbalife is similar to BurnLounge and should be shut down. But Herbalife is not some fly-by-night company – it has been around for 32 years. Most pyramid schemes collapse after a few years. On Herbalife’s webpage under “Company Background: frequently-asked question no. 4,” it addresses the pyramid charge this way:

Multilevel or network marketing organizations such as Herbalife are carefully regulated and are legal business structures that involve the sales of real products of value to consumers.

Furthermore, Ackman is not the first person to accuse Herbalife of wrongdoing and yet Herbalife is still here and thriving. In 2007, convicted felon Barry Minkow alleged that Herbalife was a pyramid scheme but withdrew all accusations in a settlement where Herbalife paid him $300,000 to end his nuisance suit. According to Barron’s Magazine, despite its well-known MLM business model, no U.S. regulator has brought any actions against Herbalife in the past 15 years. Herbalife issued a statement in response to Ackman’s presentation:

Today’s presentation was a malicious attack on Herbalife’s business model based largely on outdated, distorted and inaccurate information. Herbalife operates with the highest ethical and quality standards, and our management and our board are constantly reviewing our business practices and products. Herbalife also hires independent, outside experts to ensure our operations are in full compliance with laws and regulations. Herbalife is not an illegal pyramid scheme.

On January 10th, Herbalife will host an analyst day where it will address Ackman’s allegations in full.

Mulit-Level Marketers are a Powerful Force to Reckon With

Herbalife has friends in Washington thanks to its active lobbying campaign. The Direct Selling Association also lobbies hard. It’s unlikely that the FTC will go after Herbalife because its business model is similar to several other multi-level marketers including:

Even if Ackman succeeds in getting the FTC to initiate an investigation of Herbalife, the worst that will likely happen is a consent order that requires the company to change its compensation structure. Herbalife is not going out of business, period. Ackman has made investment mistakes in his lifetime, including losses on Target (NYSE: TGT) and JC Penney (NYSE: JCP). Herbalife may turn out to be another mistake. 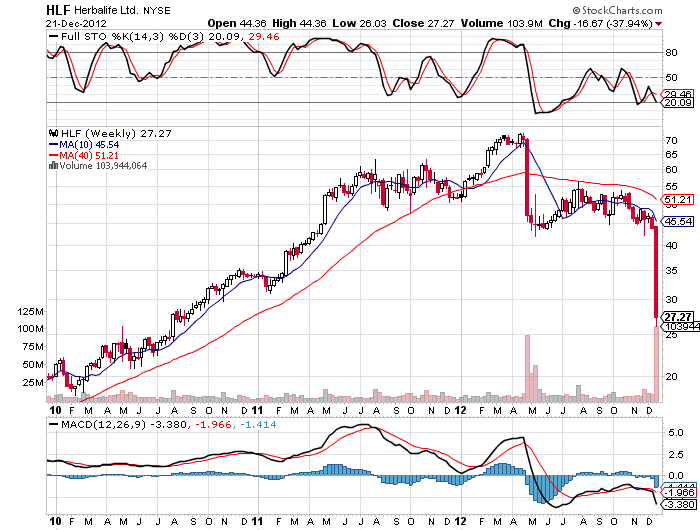