Don’t Be Manipulated By the Stock Market

The S&P 500 surpassed the 1,600 level last week for the first time in history despite the fact that global economy remains in the dumps. What is going on? Why does the market go up without the support of economic fundamentals?

Euro Zone unemployment hit a record high of 12.1% in March (since tracking began in 2000), rising for the 23rd consecutive month. Furthermore, the unemployment rate is expected to worsen later this year and remain stuck near record highs through most of 2014. No wonder the European Central Bank decided to cut short-term interest rates!

The U.S. economy is in better shape, with an unemployment rate of “only” 7.5%, but this number is historically recessionary and is deceptive because its denominator is based on people “looking” for work (in contrast to those “eligible” to work) and the subset looking for work (i.e., the labor participation rate) is only 63.3% of those eligible — the lowest since May 1979.  The unemployment rate would be 11.3 percent if the labor participation rate was at its pre-2008 level of 66%. Despite the relatively healthy April jobs report (165,000 new jobs), the U.S. still has 2.6 million fewer jobs than existed in 2007 before the “Great Recession” of 2008-09, and economists estimate that 8.6 million additional jobs are actually needed to break even if population growth since 2007 is taken into account.

U.S. corporate earnings in the first quarter have been mediocre, with 59% of companies beating already-lowered analyst estimates (slightly below average) and only 52% beating revenue estimates (significantly below average). Still, the mediocre first-quarter gains were enough to register record earnings for S&P 500 companies, which are benefitting from employer stinginess at raising wages (high unemployment enables employers to be stingy).

The S&P 500’s record-high rise last week was an extreme move that finds the index more than two standard deviations above its 50-day moving average – stocks typically stall when the rubber band is stretched this tight. Technical analyst Louise Yamada sees some warning signs in the divergent weakness exhibited by transportation stocks and small/mid caps, but remains long-term bullish. Keep in mind that “stall” is different from “correct,” and the mini-correction in mid-April may be the only significant downside the market sees until the autumn. Bullish market momentum is unprecedented, according to Raymond James equity strategist Jeffrey Saut. Since December 28, 2012, the Dow Jones Industrials has not suffered a single period where the index has closed down for three consecutive days. Saut calls this 87-trading-day streak a “buying stampede” that has blown away the previous 50-year record of 53 straight trading days:

The equity markets do not face a period of serious vulnerability until this summer, unlike the last three years where “Sell in May and go away” has played so well. I don’t think the scenario plays that way this year.

So far the bears, rubbing their collective hands together with glee over the fiscal cliff, sequestration, the continuing resolution, the debt ceiling, etc., have been totally w-r-o-n-g. I feel sorry for the bears waiting for the “crash” that they have been expecting for the past four years, all to no avail. It looks to me as if the stock market will continue its move irregularly higher until we get indications that something is irrevocably wrong. So far, nothing in the stock market’s internal structure has told us to be anything more than cautious, but not bearish.

This is the same rally we’ve had forever.  We’re due for a pause, the data’s not that great – just shut up and stay long. The economy’s slowly improving, earnings are OK, there’s nowhere else to go and – You know what? – sometimes a bullish market is just a bullish market.

Fund flow data from Lipper supports the idea that investors are just starting to increase their risk appetite and move cash out of money-market funds and into stocks. Interest rates on junk bonds have hit an all time low of 5% — a level that indicates investors have thrown caution to the wind. Warren Buffett says that stocks will go “far higher” over the long term. But the short term . . .

The problem for short-term investors looking to ride the momentum wave is that they assume a bell will ring at the stock-market top and they will be able to get out before a crash. Oppenheimer technical analyst Carter Worth says that a market decline – when it occurs — could be “worse than normal.” Private-equity investor Leon Black of Apollo Global Management (APO) is skeptical such astute market-top timing is possible and advocates starting to sell now while things look perfect and prices are liquid because selling becomes much harder and illiquid when everyone tries to exit the door at the same time. At the Milken Institute Global Conference, Black was quoted saying:

We think it’s a fabulous environment to be selling. We’re selling everything that’s not nailed down. And if we’re not selling, we’re refinancing.

The financing market is as good as we have ever seen it. It’s back to 2007 levels. There is no institutional memory.

As I mentioned at the beginning of this article, there is a tremendous divergence between the stock market and the Citigroup Economic Surprise Index (CESI), as shown  in the following chart: 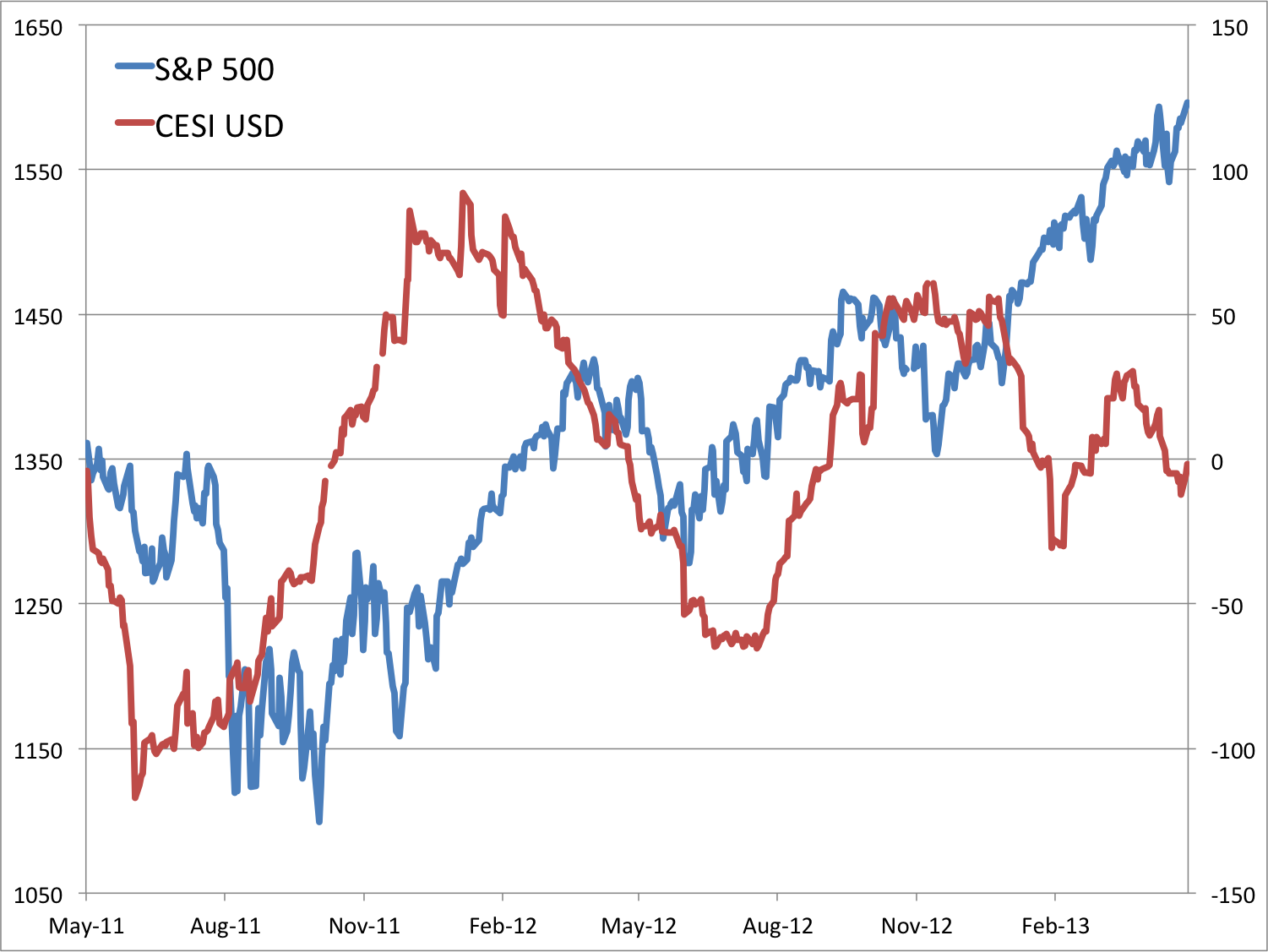 Normally, stocks and positive economic surprises move in tandem, but since late 2012 they have diverged – another one of those worrisome divergences. It’s unclear whether the CESI is a leading indicator of the stock market (or vice versa), but if CESI leads that is a problem.

Besides the negative CESI, the negative price action of copper (the only commodity with a Ph.D. in economics) is also a warning sign about the economy. According to Oppenheimer’s Carter Worth (45-second mark), in the five years since May 2008 economically-sensitive industry sectors like materials and energy have each declined more than 22% while defensive industry sectors like utilities and health care have each risen more than 30%. The same severe bifurcation in performance between industry sectors occurred in 2007 before the 2008 crash. The performance gap is so extreme that it needs to close. Either the weak sectors need to catch up with the strong sectors or the strong need to fall down to join the weak. Based on history, Worth says the latter scenario is more likely:

Bifurcation typically ends with the strong ones succumbing and the weak ones staying weak.

The reason stocks continue to move higher and ignore the real economy is because of the extraordinary monetary stimulus and quantitative easing that is being coordinated by central banks worldwide. The Federal Reserve continues to buy $85 billion per month in U.S. Treasuries and mortgage-backed securities, and analysts expect them to spend a total of $1.25 trillion on this latest round of quantitative easing before they are done.

The World According to Altucher: Buy Small-Cap Stocks

Former daytrader and financial blogger James Altucher argues that this monetary stimulus has rigged the stock market. Companies are flush with cash but don’t invest in business expansion because the real economy is moribund, so they use the cash to buy back their own stock, reducing supply and pushing prices up. To remain public companies, however, there are limits to this buyback activity and Altucher believes the limits have nearly been reached. So, the price support provided the stock market by buybacks and decreasing supply is ending. Investor demand, in contrast, has been weak for years and will likely continue weak because those lucky enough to have jobs in this punk economy are insecure about their futures and have stagnant wages, so they don’t have enough discretionary income for long-term investing. The result is that “stocks go down or struggle to stay afloat.”

The stock market is increasingly controlled by big institutions that focus only on the largest stocks, pushing prices up and down based on “risk on” and “risk off” macro views of the global economy. The fundamentals of individual large-cap companies mean nothing anymore – all large caps rise and fall in unison because they are traded in big baskets of ETFs. The small investor doesn’t have a chance:

For the first time in a long time, I’m not a super bull on the overall market. I refuse to compete for information against massive hedge funds and mutual funds that do everything they can to cheat the system (insider trading, manipulative trading, high frequency trading, special access to secondaries, etc.).

Altucher is not against stock investing; quite the contrary, he is invested in several stocks. But he only invests in stocks in which he stands a fighting chance – those that aren’t part of the “criminal enterprise” and “sucker’s game” known as the overall stock market.

What are the “right” kind of stocks” According to Altucher, the answer is small-cap stocks! Only stocks that are too small to capture the attention and manipulative efforts of the hedge funds and hyper-frequency traders will act according to their fundamentals and reward the individual investor who puts in the time and effort to analyze the business and competitive landscape.

Altucher’s preferred small-caps are highly-speculative and money-losing micro-caps trading on the electronic bulletin board. Those are too high risk for me – most of them turn out to be losers. In contrast, I focus on small and mid-caps that have proven business models and generate substantial free cash flow and earnings. Separating the winners from the losers is the key to small-cap investing.

To invest profitably, one need not take excessive risks; the goal is simply to invest in successful companies while they are small, so that you can ride their appreciation potential to the fullest during the high-growth stage of their corporate existence. Low-risk profitable companies trading at reasonable valuations are the kind of small caps that Roadrunner Stocks seeks out and recommends.