The Fed had been talking about raising interest rates, but now those look like empty words, given the dismal 38,000 new jobs created in May. And that the market is taking that in stride is unsettling. If the central bank does raise interest rates at its upcoming June meeting, investors could hit the sell button in fear that higher rates will tip the already sluggish economy into recession.  And if it leaves interest rates unchanged, traders may worry that the economy is so fragile the Fed is concerned about snuffing out what little life that’s left in the economy, and hit the sell button anyway.

The S&P 500 (SPX), as we pointed out in our May 23 column,  topped out on May 21, 2015 at 2130.82, and has since failed six times to rise above that key chart point, once again stalling just below 2100 on the close of trading for June 3.   This suggests a lack of conviction for the bulls but doesn’t tell us much more than that. It certainly doesn’t give the bears an all clear to sell the market short, unless it turns out that June 3 was the top, which remains to be seen. 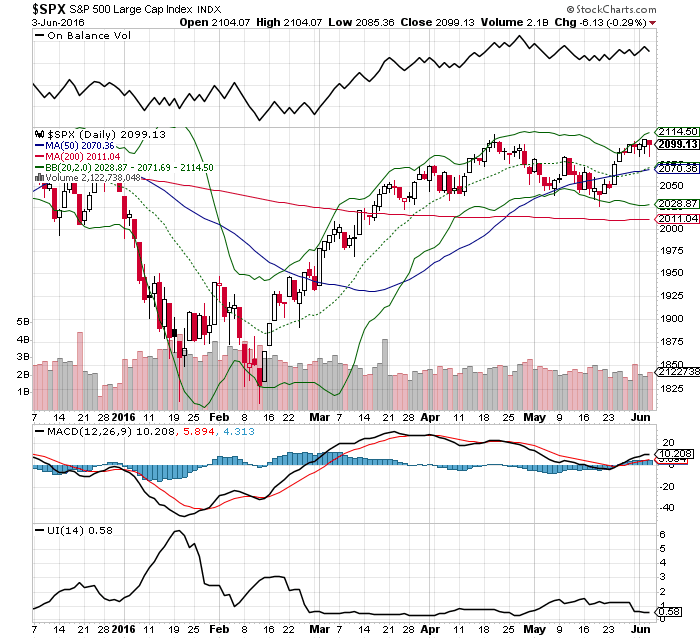 Here are some key points:

To summarize, the S&P 500 may continue to grind higher in the short term. But unless some technical indicators change, upside momentum is starting to show enough weakness to keep us cautious. 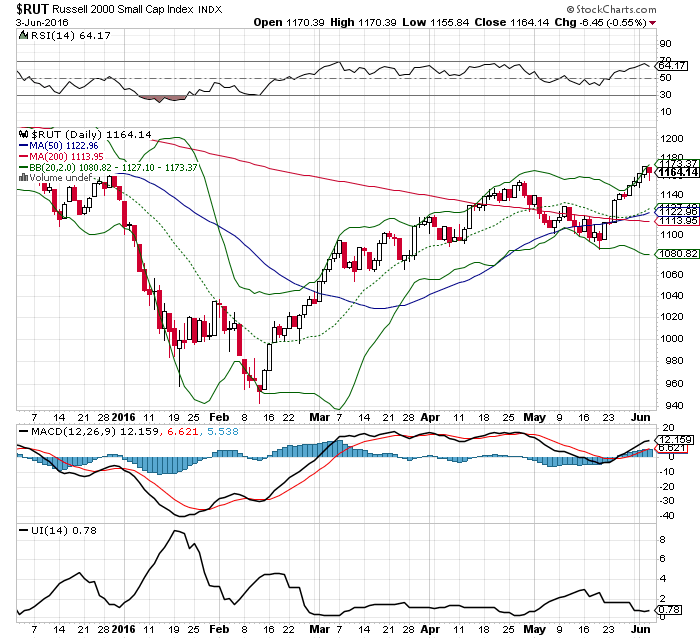 You can interpret this scenario of out-performance by the small stocks over large stocks in two ways.  One way is to see it as a positive as small stocks are a higher growth sector and investors are bullish when they put their money into growth stocks.  Another way is to see a rally in small stocks as the last gasp of a bull market.  It’s not certain which way things will break, but in a bull market that’s nearly eight years old, the odds may favor the second interpretation.  Making this more plausible is the fact that even with the recent rally in the Russell 2000, the small stocks are still 10% away from their June 2015 highs.  If the S & P 500 is a sign of calm waters, then maybe the Russell 2000 is a sign of potential trouble ahead as it is unlikely to confirm a new high in the S & P 500 in the near term.   If the S & P makes a new high but the small stocks don’t confirm it within a reasonable amount of time, it would be considered a negative technical divergence.  Divergences usually lead to a change in the current trend. And in this case, such a divergence would likely preceded a decline in the overall market.

We may be wrong, but the odds seem to be in favor of the market being closer to a significant top than to a refreshing set of new highs.  Time, of course, will tell.