Technical Nuggets: Partly Cloudy With a Chance of Rain, or Not

Something is amiss in the financial markets as evidenced by their increasing volatility.  And while I’m not looking to be an alarmist, my analysis of multiple technical indicators suggests that more money is coming out of stocks than going into them.  Although that could change quickly, longer term analysis suggests that there may be more underlying weakness than many realize in the U.S. stock market. Unless something substantial happens to reverse its course, this may be a sign that something extraordinary may be unfolding and that downside risk is rising.

If you looked at the markets after the close on June 17th you might have been ready to sell everything.  But if Monday’s early action in the futures market is any indication of what could come in the next few days, you probably changed your mind. That’s the way things are today in a stock market that resembles a weather forecast; partly cloudy with bouts of bright sunshine, with a possibility of rain followed by intense bouts of heat and a possible cooling trend.  Sprinkle in a tornado warning along with a few earthquakes and you’ve got the picture.

In our June 3rd edition of Technical Nuggets, we wrote: “Calm waters can be hiding places for big sharks.  This market seems to be in a steady uptrend and many investors are looking to relax.  But in our opinion the calm demeanor of the S & P 500 is misleading, and complacent investors could be in for a nasty surprise. As traders hit the beaches, and the Federal Reserve makes interest rate decisions in the next few days and weeks, the markets are increasingly vulnerable.”

So what happened since our last column?  First, the Federal Reserve left rates unchanged citing fears about global markets and the UK leaving the European Union, an event commonly known as the “Brexit.”  Last week’s polls showed the odds in favor of a vote that would lead to the UK leaving the union, and the markets tanked.  But the deadly assault on a member of parliament may have tipped the scales toward a “stay” vote.  The truth is that no one really knows what will happen and that investors along with everyone else will have to wait until the actual vote before making long term decisions about their investments.  But the markets are gyrating wildly, anyway.

What hasn’t changed is that the U.S. Presidential election remains an intangible dynamic, the global economy continues to lean toward weakness while geopolitical events, such as the Orlando shootings, and the continued battle against Isis, aren’t going away soon.  That means fearful consumers aren’t likely to spend, and corporations are also pinching pennies. Meanwhile, the S&P 500 (SPX) again failed to climb above its all-time high near 2130, as we suggested could happen, and has dropped 1.4% before any potential Brexit related rebound.  And while the S&P’s performance is somewhat steady, the Nasdaq 100 Index (NDX), which houses the largest 100 stocks that trade on the Nasdaq Composite index including Apple, Microsoft, Alphabet and Cisco Systems, has dropped nearly 3% over the last two weeks.  This is a significant development given the interest in large-cap technology stocks and their influence on the overall market.

The Buyers (with or without Elvis) Have Left the Building

Let’s focus on the chart of the Nasdaq 100 Index (below) and the four major events that are evident. 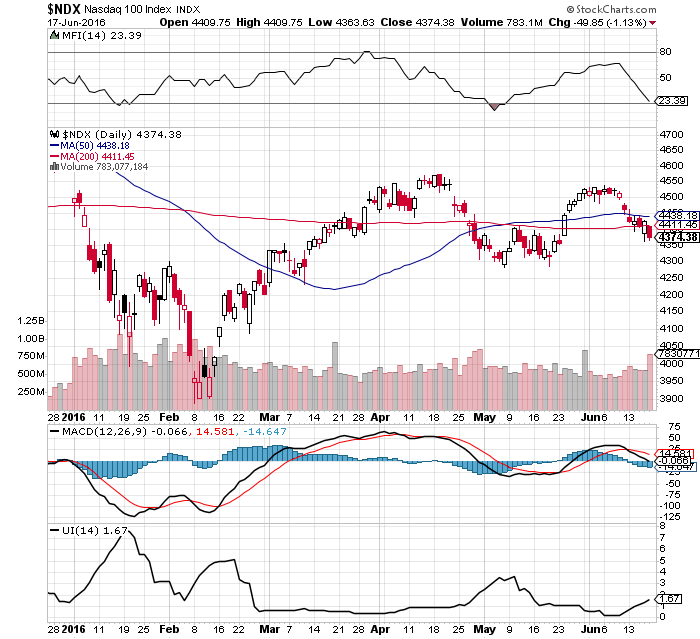 It’s Time to be Vigilant

To be sure, chart analysis is at best an imperfect science.  This is a strongly negative report, but rightly so, given the technical picture of the market. By the same token, it is plausible that things could reverse and that what is now negative could be positive in a few days or weeks.   Yet, it’s also clear that the U.S. and the global economy are not firing on all cylinders.  Only 38,000 new jobs created last month plus downward revisions of the prior two month job surveys are proof of this.  Over the weekend, Rio de Janeiro, the site of the 2016 Summer Olympics declared itself to be in a state of “financial calamity,” which is euphemistic language for “we ain’t got enough dough to pay for all this stuff.” And as we noted in our lead paragraph, this Thursday (June 23rd), the UK votes on whether to stay or to leave the European Union.   Those are all very meaningful events whose outcomes are likely to have very important consequences.  All I’m saying is that this is a good time to be vigilant.

Could I be wrong? Yes, anyone can be wrong about the financial markets at any time.  And with central banks trying to keep global confidence from collapsing, anything can happen.  But what is worrisome is the wild day-to-day swings in prices and fundamental developments that aren’t very encouraging.  What would it get me to change my views? A really big and impressive rally to new highs that is nearly perfect in every technical and fundamental aspect. In other words, a nice change in the weather would be very welcome.