A Chicken in Every Pot

As our much anticipated “two-tier” stock market begins to take shape, we are excited to see so many of our portfolio stocks already benefiting from the increased interest in companies with sustainable profit models.

Case in point is the company we named as “The One Tech Stock to Own in 2014” last December 16th; Apple Inc. (NSDQ: AAPL). Over the past eleven months its price has delivered a total return – capital appreciation plus dividends – of 39%. That is more than double the 15% total return of the NASDAQ Composite Index over that same time span!

Not only do we believe Apple is the best tech stock to own this year, but quite frankly we also think it is the best company to own for the next five years. For that reason we are raising our current buy limit on Apple to $115 based on its still very strong BiQ rating of 7.0 and its attractive STR score of 7.7.

But it isn’t only Apple that is handily beating the market. As Rob DeFrancesco outlines below, many of his Next Wave portfolio holdings have recently jumped on the strength of outstanding financial performance. Rob only took over this portfolio two months ago, and already he has delivered exceptional returns to our readers.

Just as last week’s congressional elections made clear voters dissatisfaction with the status quo, investors are also trading out underperforming equities for others that have demonstrated mature leadership.  Our approach to picking stocks is much more than just “change you can believe in”; we believe it can deliver “a chicken in every pot and a car in every garage”.

For example, you may recall two weeks ago we issued a buy Alert for Kongzhong Corp (NSDQ: KZ) when we transferred it from the Next Wave portfolio to our Equity Trades portfolio, stating “we feel it is now oversold and represents an attractive speculative play on the online gaming market.” 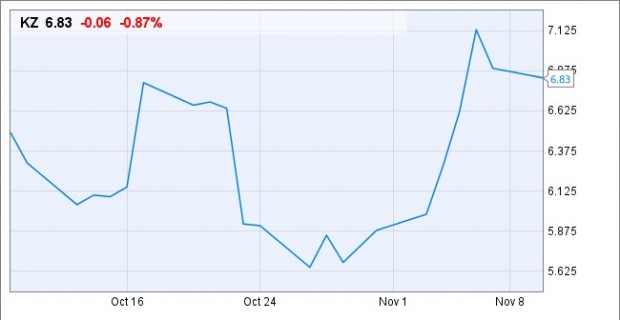 On that day (October 30th) KZ closed at $5.78, and this morning opened at $6.88 for an increase of 19% in just ten days! We still think it is undervalued, and our short term price target is $8 for those of you only interested in a quick profit. The company is announcing its third quarter financial results later this month on November 24th, so the recent run-up in value might indicate that corporate insiders know the news will be good and are accumulating the stock in anticipation of that announcement.

While that type of behavior is illegal here in the United States, it is common practice in China where day-trading is rampant and the relationship between business and the government that regulates it is much more mutualistic. To be clear we aren’t claiming any sort of ethical superiority over the Chinese business culture as there certainly is a less apparent, but equally insidious, version of it practiced on Wall Street.

Morality aside, in the long run a company can only dodge the truth for so long before its true value becomes apparent. Just like an empty campaign slogan, a company that cannot deliver on its promises is quickly jettisoned for one that can. Now that’s the kind of change I can believe in.

Shares of Paycom (PAYC) surged 19% in one session and went on to hit a new post-IPO high at $22.49 after the company reported strong Q3 results, with revenue advancing 42% to $36.6 million, coming in above the consensus estimate of $34.5 million and the high end of the guidance range of $34 million to $35 million. Gross margin of 82.4% was up 310 basis points year over year and 150 basis points sequentially. Per-share earnings of five cents topped the consensus by a penny.

In Q3, the company’s annualized new recurring revenue (ANRR), an estimate based on annualizing the first full month of revenue from new clients, jumped 52% to $14.9 million, acceleration from 39% growth in Q2. While Paycom did not add any new sales teams in the September quarter (five were launched in Q1), management is preparing to bring on new teams in the coming months. There is a long runway for adding teams across new geographies as well as building out existing teams.

NICE Systems (NICE) shares rallied 9% in one session and reached a new 52-week high of $46.71 after the company reported Q3 EPS of 70 cents, six cents above the consensus estimate. Revenue rose 9% to $250 million (the consensus was $244.4 million), driven in part by 17% growth in sales of security solutions, which accounted for nearly a quarter of total revenue.

Introduced in July, the company’s Engage Platform, which enables organizations to capture and analyze all customer engagements in real time, experienced solid demand out of the gate. Companies today have much more customer data than ever before, and need to be able to harvest this data in order to improve the customer experience and differentiate themselves in highly competitive environments.

NICE Systems remains a ‘Buy’ in the Next Wave Portfolio up to $50.

Teradata (TDC) reported Q3 EPS of 71 cents, five cent above the consensus estimate, on revenue of $667 million (flat year over year), vs. the consensus of $668.6 million. Indicating continued strong demand for its data warehousing products, Teradata in the quarter added the second highest number of new customers in a dozen years, according to CEO Michael Koehler. Also, the company is on track this year to hit $100 million in revenue associated with big data analytics solutions.

Teradata remains a ‘Buy’ in the Next Wave Portfolio up to $45.

Zynga (ZNGA) in Q3 surprised to the upside, delivering revenue of $176.6 million, above the consensus estimate of $167.7 million. Bookings of $175 million were up 15%, while mobile bookings surged 111% and accounted for 55% of total bookings. A key metric, average daily bookings per average user (ABPU), advanced 34% year over year and 9% sequentially to $0.073.

The company’s core game franchises—Casino, Words With Friends and FarmVille—in the latest quarter saw combined bookings growth of 30%. In September, the company launched the new Zynga Poker, featuring an improved design and better social interaction between players. Zynga also recently entered the sports category with the launch of NFL Showdown across the iPhone, iPad, iPod Touch and in Google Play.

For Q4, Zynga expects revenue of $170 million to $200 million, vs. the consensus estimate of $191.3 million. With 2014 being a rebuilding year (the focus has been on assembling a new leadership team, better execution and resetting the product pipeline), Zynga is positioning itself for a return to top-line growth next year. The 2014 consensus revenue estimate of $708.4 million indicates a 1% decline, but the 2015 consensus of $840.5 million represents growth of 18.6%

The 2014 consensus revenue estimate of 207.1 million indicates growth of just 1%. For 2015, the company expects to hit its new revenue target range of $250 million to $260 million through a combination of organic growth and acquisitions.

Ebix remains a ‘Buy’ in the Next Wave Portfolio up to $18.