With only two trading days left in 2014, it appears the U.S. stock market will post double-digit gains for a third consecutive year. This feat is particularly impressive considering we were at a net loss for the year as recently as April, and at only a 2% gain during the nadir of October’s short-lived “Ebola panic” correction.

With the exception of that October meltdown, a look at the chart of the S&P 500 Index for the past three years shows a classic pattern of higher highs and higher lows as it has almost doubled in value. The tech-heavy NASDAQ Composite Index has more than doubled in value during the same time period, with a bit more volatility than the broader market as you would expect. 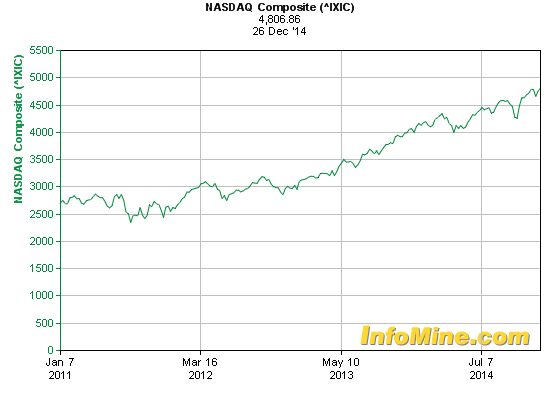 In short, you could have bought an index fund or ETF and done very well for yourself while the Fed was propping up the financial markets via its Quantitative Easing program. However, the strength of the most recent employment report coupled with a surge in GDP has the Fed publicly suggesting that it will discontinue aggressive intervention and allow rates to rise in 2015.

If that happens (which at the moment appears to be a near certainty) then it is quite likely that we will see a very different trading pattern over the next five years. And if that turns out to be the case, then you may need a very different portfolio management strategy going forward, as a passive “buy and hold” approach may result in very little net gain.

That also suggests that there will be just as much potential for gain on short sale opportunities as there will be for long (buy) positions. At the onset of this year we locked in big profits on short sale recommendations for 3D Systems (DDD), and Amazon.com (AMZN), but discontinued additional short sale recommendations during the summer when we felt that market was on an upward tear that would make short selling less profitable.

Turns out we were right about that, but now we think it is time to take a hard look at some solid short sell opportunities. And just like last time, in order to do that all we have to do is consult our Smart Tech 50 table and sort by the STR column, from lowest to highest.  By doing so, we learn that the 10 tech stocks that appear most likely to decline in value in 2015 (i.e., have the lowest STR scores) are Netflix (NFLX), Twitter (TWTR), Amazon.com (AMZN), Autodesk (ADSK), LinkedIn (LNKD), salesforce.com (CRM), 3D Systems (DDD), Adobe Systems (ADBE), Yelp (YELP) and Rackspace Holdings (RAX).

Of those, already Netflix, Twitter, Amazon.com, 3D Systems, Yelp, and Rackspace have experienced a huge decline in value in 2014 as investors began to realize that they are not likely to deliver they type of earnings they were expecting. Since those stocks have already been revealed as being overvalued, that means they are less likely to offer as much profit potential on short sales compared to those that have not yet suffered a major setback recently. That list includes Autodesk, LinkedIn, salesforce.com, and Adobe.

So, as we head into 2015 we are initiating short sell recommendations in our Equity Trades Portfolio in these four stocks. However, you don’t have to actually sell them short to profit from future declines. Instead, you can buy put options that go up in value when the price falls below your strike price (the price at which the option can be executed; e.g., you can make someone else buy that stock from you at that price).  This type of investing is not for everyone, and there are still plenty of long (buy) recommendations for you to consider in our Investments and Next Wave portfolios if this type of trading is not to your liking. That said, we believe many tech stocks will experience substantial revaluation in 2015, including these four.

It used to be that customer service was a private matter, with problems handled behind the scenes; but these days, consumers increasingly turn to social media to air their gripes, making it more critical than ever for businesses to get it right.

Poor customer service is now much more of a social event, and potentially more harmful to an organization’s reputation.

Zendesk (ZEN), provider of a cloud-based customer service platform, completed a successful IPO in May: the shares were priced at $9 and opened for trading at $11.40. In late October, the stock hit a post-IPO high of $28.20.

I am keeping an eye on the Zendesk as a potential addition to the Next Wave Portfolio. From a valuation perspective, the shares would be more attractive on a pullback into the low $20s.

For 2014, Zendesk is expected to come in with revenue of $124.9 million (estimated growth of 73%), representing a tiny share of the overall market for customer service/call center software (estimated by research firm IDC to be worth $10.2 billion) and indicating a lot of room for expansion.

The company, founded in 2007, in the latest quarter added more than 3,000 new accounts and now has an installed base of 48,000+ customers across 150 countries. Among Zendesk’s customers: Uber, OpenTable, Airbnb, Groupon, Adobe Systems, Box, Dropbox, L’Oreal, Nine West Group, Red Bull, Roku and AOL. Going forward, Zendesk is looking to expand its presence in the financial services and healthcare verticals.

Zendesk is a prime example of how excellent customer service can be an important marketing tool: 68% of its new engagements come from word of mouth and other unpaid means. In the latest quarter, the company’s dollar-based net expansion rate of 123% shows strong customer retention and demand from the installed base.

The company continues to innovate as well as expand the platform. Earlier this year, Zendesk bought Zopim, a provider of advanced real-time chat functionality, and in Q2 began to integrate this newer technology into its platform. In addition, Zendesk has been expanding its analytics feature set, making it easier for its customers to analyze interactions to improve customer satisfaction, boost loyalty, reduce churn and drive more up-sells.

Zendesk offers five different pricing levels, with 85% of its recurring revenue coming from the middle tiers. While Zendesk’s help-desk solution is aimed at smaller businesses, the company now generates 23% of its monthly recurring revenue from customers with at least 100 seats, more than double that of a year ago. When it comes to large accounts, Zendesk generally gets its foot in the door at the departmental level and then expands from there via positive recommendations.

While half of all new customers now come from a no-touch sales channel, the company is expanding the number of outbound-focused sales reps to help drive growth at larger accounts. Zendesk’s goal is to have 100 salespeople on board by the end of this year, double the number at the end of 2013. This expanded field sales team, with its own pipeline of business, should provide a boost to top-line growth starting next year.

The company has been ramping up its international business, which now accounts for 44% of total revenue. Zendesk already has more than 15,000 customers across Europe, the Middle East and Africa. The company counts 3,000 accounts in Australia and New Zealand, while fast-growing Brazil now has a base of 1,500 customers.