The Nasdaq Biotech Index (NBI) gave back nearly half of the year’s gains from April 23rd to April 30th. Thus, a bounce is clearly in the offing and is one to watch carefully.  By the same token if Friday’s (May 1) bounce fizzles in the not too distant future, we could be headed for a more meaningful correction.  Here are the crosscurrents for the sector:

A decent merger and acquisitions climate

This is the major positive for the entire sector at the moment.  There is some interest in mergers and acquisitions in the biotech and pharmaceuticals sector as companies fight for market share in a climate of contentious reimbursement from third party payers for expensive drugs.

Celgene (Nasdaq: CELG) bought privately held Quanticel Pharmaceuticals, Inc in a multi-step deal that could be worth up to $485 million.  Celgene will $100 million and has pledged additional payments of $385 million on pending milestones on Quanticel research and products.

The other story to watch is the developing saga of Teva Pharma’s (Nasdaq:  TEVA) attempted $40 billion for Mylan Labs (Nasdaq: MYL) in an attempt to expand its generic drug market share.  Teva is already the world’s leader in generic sales.  Mylan seems to be less than interested in a merger at this point. Teva is forging on. Both stocks are holding up fairly well, suggesting that investors are still betting on the deal getting done.

Mixed performance on the research and earnings front

The OUCH of the week! Celladon (Nasdaq: CLDN) lost 80% of its value when it announced that its gene therapy drug Mydicar, aimed at treating advanced congestive heart failure failed to meet objectives in a phase IIb trial. The stock ended the week of 5/1 trading below $3 after reaching a recent high on March 19, 2015 of $27.46.

Amgen (Nasdaq) took a hit when the FDA announced that it had some questions about the company’s data regarding its experimental skin cancer drug, talimogene laherparepvec,  and saw no reason for fast track approval.

The bright spot was Gilead (Nasdaq: GILD), whose sales of its Hepatitis C drugs Harvoni and Sovaldi were nearly $8 billion for the quarter.  The stock rallied on the day the news was released.  The company gave good guidance, so it will be important for shares to follow through and establish a credible uptrend in the next few days.  If that’s the case, we may see other biotech stocks join the upward trend and the rally could resume.

Rising uncertainty with regard to interest rates and the U.S. economy

This may be the biggest issue with not just biotech, but the whole stock market.  No one, including the Fed, really knows when and how an interest rate increase will come.  What is clear is that the market has some fear with regard to the prospect of higher rates.  What that means is that if, and when, there is an interest rate increase, and the market sells off, we would expect the traditionally volatile biotech sector to decline significantly.  The 8% decline in the NBI index over five days in late April is pretty good proof of that as the Fed was making noise during the week and the market got spooked.

What do you do in a market like this?

In a wild and woolly market there is only one thing to do, look for stability, earnings potential, and a good looking stock chart that suggests that the company is being held by strong, patient hands.  That’s why it’s important to consider the story, the company, the management and the need for whatever the company’s product happens to be.

A little talked about external factor these days is the threat of a biological weapons attack.  Yet, the threat is still there and may be rising, given the current state of affairs in the world.  If it does happen, there is a vaccine which has been approved since 2008. It’s called Biothrax, and it’s manufactured by Emergent Biosolutions ( NYSE: EBS).  The company also makes vaccines for botulinum toxin and smallpox, two other potential biological terror agents. In the case of Biothrax, it’s indicated for the prevention of harmful exposure, not the treatment of infection with Anthrax.  Nevertheless, if there is an event, the demand for the vaccine is likely to rise, meaning that the company’s production of Biothrax is likely to remain steady just on the thought of what could happen. 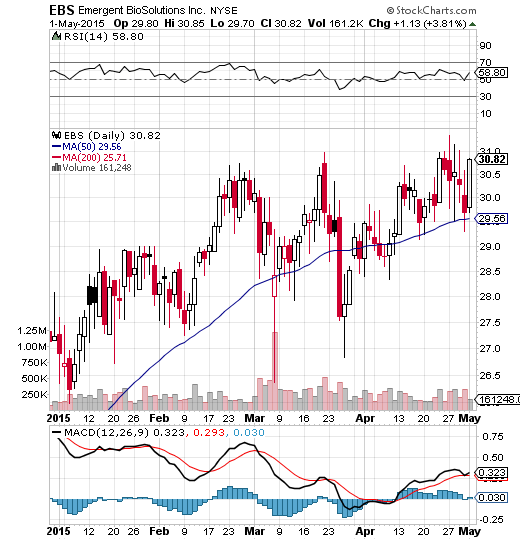 EBS has a market cap of about $1.2 Billion but while the biotech sector was all over the place in the last few days, the stock barely moved, and has remained near its recent 52-week high,  suggesting that it’s in strong hands.  The company, on April 30th, received FDA approval for its Hemophilia B treatment, IXINITY.  The drug can be used both as prevention method or treatment of Hemophilia B related bleeding episodes.  There are some 4000 patients with Hemophilia B in the United States.

The stock sells at 38 times trailing earnings and will announce earnings on May 7th.  Analysts estimate a loss of 44 cents per share for the first quarter. The company has a history of losing money in the first quarter and then making up for it sequentially in the last three quarters of the fiscal year.  It lost 40 cents per share in its first quarter in 2014, where expectations were for a 14 cent per share loss.  In its June quarter it also missed. Both times the stock got crushed. It turned out to be a great buying opportunity both times.

The company has reaffirmed its revenues and earnings loss for the quarter and recently received a $31 million grant for the development of the next generation Anthrax vaccine, NuThrax.

We would suggest establishing a small position before the earnings gets released, as analysts are expecting a big loss since they got caught off guard last year and the company has reaffirmed its expectations.  If the stock beats expectations and shows significant strength buying a few more shares may make sense.  Any weakness may again prove to be a good opportunity to add to the position.

Overall, it looks as if EBS is doing the right things as a small company to stay in business.  Its growth potential looks to remain steadily rising at what should be a sustainable rate.    It’s the kind of stock that you can consider as acting similar to an insurance company, where it’s good to know that the products are available but you hope to never need them.  It’s also an island of stability in a volatile sector. To be sure all things could change on May 7th when the earnings are released. But that’s life in biotech.

Catching Up on Recent Recommendations and News

Repligen (Nasdaq: RGEN) Buy on the dip if you are aggressive

For those who read our previous update, you may have bought shares of Repligen at the 35 area.  The stock rallied above 35 on April 23rd, only to sell off with the rest of the market. We still like it and it makes sense to add a few shares on weakness here.  We noted in our initial recommendation that the 32-34 area was attractive but that a move above 35 on strong volume was also a buy point.

The story is still good, but the stock is a bit wobbly, not showing any relative strength in a volatile market. Earnings are due on May 7th.  Expectations are for anywhere from 1 cent to 75 cents per share. Average EPS is at 27 cents. The company has had a lot of good news lately and they are selling their  Xtandi (enzalutamide) testosterone blocker well.  This could be a roller coaster. The stock fell below the 130 area where buyers seemed to be nibbling.  It looks as if the next buying point on a decline may be around 117.  We’d watch this one a little longer.

Ipsen (Nasdaq: IPSEY)– The stock went up on 4/16 despite bad news and kept on going. It’s come too fast too soon, which means that it’s not something to chase.

Dr. Joe Duarte has been a professional investor and independent analyst since 1990.  He has appeared on CNBC, has published articles on Marketwatch.com and has been widely quoted in the major media including The Wall Street Journal and Barron’s magazine.  He is author of “Trading Options for Dummies,” 2nd Edition and “Trading Futures for Dummies.”  His second book was “Successful Biotech Investing.”  Dr. Duarte does not own shares of Medivation , Repligen or Emergent Biosolutions as of 5/1/15.