By Jim Pearce and Linda McDonough • May 11, 2015 • Breakthrough Tech Weekly

The biotech sector rebounded on the week that ended on May 8th. Behind another merger announcement and some mixed economic news, the worries about the Federal Reserve raising interest rates put fears on hold for a bit.  The Nasdaq Biotech Index (NBI) closed above its 50-day moving average, a positive for the intermediate term.  If this move sticks it is likely that NBI will move back toward its recent highs near 3850-3900.  That would likely take a good number of stocks in the sector higher. 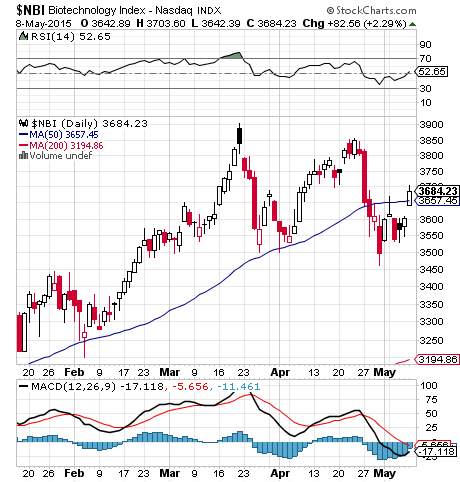 Seasonally speaking, we are in a good place for the sector as the American Society of Clinical Oncology (ASCO) meeting starts at the end of the month and the news cycle for scientific abstracts will start trickling in mid-week. Read more about ASCO below.

Alert – We are now issuing an official BUY alert on EBS, RGEN, and Medivation (Nasdaq: MDVN), which we featured in our first report.   For those with a trading bent, we are also offering some short term guidance and Buy recommendations on biotech ETFs:  IBB and PBE ahead of the upcoming ASCO meeting and release of abstracts.

Repligen – BUY – RGEN reported revenues of $20.8 million, and profits of $2.9 million. Net income was 9 cents per share, 2 cents ahead of estimates.  The company also guided revenues and earnings higher for fiscal year 2015. The stock jumped to 37.55 on May 7th and consolidated its gains on May 8th.

Emergent BioSolutions – BUY – EBS missed its earnings by 5 cents per share and guided its second quarter down but lifted the rest of the year estimates.  At play here are several issues. First  the company delayed its Biotthrax vaccine shipments in the first quarter due to its finding some foreign substances in a handful of vials. The investigation yielded no evidence of widespread contamination and production is back on line.  The company has received FDA approval for its approval for its Hemophilia B treatment, IXINITY.  The drug can be used both as prevention method or treatment of Hemophilia B related bleeding episodes.  There are some 4000 patients with Hemophilia B in the United States.  EBS has recently received a $31 million grant for the development of the next generation Anthrax vaccine, NuThrax.   Dr. Duarte established a position in EBS on May 7th, 2015.

Medivation – BUY – Medivation missed both on its quarterly revenues and earnings on May 7th. The stock took a beating in afterhours trading. But the conference call was comforting to enough buyers to bring the stock back on Friday.  The company said that it was quite pleased with results, especially its sales growth rates both domestically and internationally where it has received several regulator approvals of late. Technically, it held above the 116 area, which was a very positive sign. XTANDI, its prostate cancer testosterone blocker continues to grow in sales both in the U.S. and internationally.  It looks as if a good amount of bad news was factored into the stock as it lost some 17% from its March 23rd high as earnings approached.  The miss was related to inventory buildup and Medicare payment system related issues which should not recur until late in 2015.  We like it near the 120-127 area and would expect a move back up to the 130-140 area.  We would suggest pruning some of the position as it climbs above the 135 area as more sellers could move in.

Expect some volatility in individual stocks over the next few days and as the end of the month approaches.  The annual American Society of Clinical Oncology (ASCO) meeting will take place on May 29-June 2 in Chicago. Abstracts will be released on May 13th. These two weeks are usually a period of big moves, up and down, in biotech stocks, especially in smaller companies where results of clinical trials are scrutinized for any detail, no matter how small, of possible success or failure of drugs under study.  Big pharma also participates and larger stocks tend to move as well based on the results of their trials or studies using established drugs.

Abstracts will be released on May 13th at 5 PM Eastern time at Asco.org .

A good way to play ASCO is to buy a biotech ETF, such as IBB or PBE.  We are issuing a BUY alert on both ETFs prior to the conference.  Due to the potential volatility brought on by the announcements and results of the studies and abstracts, the ETFs offer some diversification and protection.  Dr. Duarte owns shares in PBE as of this writing.

The overriding fundamental driving the M & A activity in biotech is the lack of growth and the increasing competition for revenues and earnings in the sector. As the Affordable Care Act continues to be implemented, insurance companies and hospital systems are looking to pay less for drugs. That means that companies without marketable products are likely to have more difficulties in the not too distant future.

The flip side is that many so called concept stocks are nearing the end stage of significant clinical trials and other companies have emerged from the concept stage and are now starting to move into significant revenue growth with earnings in the not too distant future. That means that we may be in the early stages of the M & A dynamic.

The deal of the week was Alexion’s (Nasdaq:  ALXN)’s proposed $8.4 billion acquisition of Synageva (Nasdaq:  GEVA). The deal will include both cash and ALXN stock for payment.  Alexion’s motives are being questioned given that Synageva doesn’t have any products yet but is expecting an FDA decision in September for its orphan drug Kanuma for the treatment of lysosomal acid lipase deficiency (LAL deficiency) in September.

Investors cheered Microsoft’s results on April 23rd.  Evidence that the company’s cloud strategy is taking root resulted in an immediate 14% boost to its stock price. The stock rocketed up to $49, just 50c shy of its 52 week high.

“I want to close by reflecting on Microsoft’s transformation to a company that will thrive and help our customers thrive in a mobile-first, cloud-first world. This is a new world with new growth.”

Investors are thrilled to see Nadella so optimistic about the growth prospects for the company’s Cloud business.  As recently as January, the stock was pummeled as investors grew impatient with improvements in the behemoth’s operating results.  For a company with $22 billion in quarterly revenue, it takes a revolutionary product to shift numbers.

The cloud seems to be just that.  Cloud revenue is comprised of both Azure, the company’s data and cloud computing platform, and monthly subscriptions to Office 365.  In a bid to help soothe some of investors’ frustration at lack of disclosure on exact Cloud revenues management offered some detail. They noted that the commercial Cloud revenue annualized run rate was $6.3 billion.  At a later analysts’ briefing Nadella forecast that Cloud revenue would equal $20 billion by 2018. This is the seventh quarter in a row that that Cloud revenue has grown in the triple digits.

Later on May 5th Bloomberg News issued a story that Microsoft was considering buying salesforce.com in order to secure an even bigger spot in the cloud industry.  Salesforce.com has a $47 billion market cap, making the list of potential acquirers quite short. Microsoft is one of the few names on that list with access to such huge sums of capital.

Microsoft ended the quarter with a whopping $95 billion in cash and has generated $22 billion in cash flow year to date.  The company’s dividend payment equals “just” $10 billion annually leaving it loads of excess cash to utilize in building its business.

Readers may recall that Intel lowered expectations for the March quarter on March 12th.  Although the company met these lowered numbers on April 14th, management issued new lower guidance for the full year 2015.

As we’ve discussed, Intel’s fortunes are tied to the PC market which remains sluggish.  Management specifically called out slowing desktop computer sales to small and medium sized businesses as culprits for the lower earnings. In addition, the PC supply chain has been cutting back orders as they await the release of Windows 10 this summer.  Manufacturers and distributors typically reduce orders of older product so that they don’t get stuck with less desirable inventory when the new product hits the shelves. This drop in demand should be temporary so barring additional degradation in overall demand Intel should see a pickup in its Client Computing revenue line by the third quarter.

Overall revenue was flat for the quarter and is expected to be flat for the year.  However, there were glimmers of hope in Intel’s release.  Intel’s Data Center Group revenue, which provides chips to servers used in data centers, grew 19%, a slightly higher rate than the 18% growth in 2014.  Growth in this segment was due to a combination of both higher unit sales and higher prices, a desirable and unique combination in the tech world. Cash flow from operations was up 26% from last year.  This metric has shown quite a bit of volatility for Intel so it will be important to watch the next few quarters to tell if this is a reliable trend. Intel also cut back its spending plan on capital expenditures to $8.7 billion down from $10 billion.

In a nod to Moore’s Law, which celebrated its 50 year anniversary last month, CEO Brian Krzanich noted that the 3-D NAND flash memory chips developed in conjunction with Micron will be available in the second half of this year.  As predicted by Moore’s analysis, this chip will offer 3 times the capacity at a lower cost than previous technologies.

Intel is an original member of the Smart Tech Investor Investments Portfolio, added on December 16, 2013 at a closing price of $23.53. Although we have enjoyed a 40% return since its inclusion, the stock is rated HOLD and carries a Smart Tech Rating of 4.8.