Why Being Patient Matters in This Market

The biotech sector again fell on the week that ended on August 14th, along with the S & P 500.  On the negative side of the ledger, the Nasdaq Biotech Index (NBI) closed the week below the 3900-4500 area for the second straight week. So 3900 was key support, but now becomes resistance.  That means that there may be some selling if and when the index bounces back toward 3900. And while 4500 has been our upside target, NBI needs to close back above 3900 before we start considering 4500 again.  NBI also remained below its 50-day moving average for the past two weeks, which may be very meaningful at some point in the future if things don’t change.   It is possible that NBI may work its way lower in the short term, with the 3600-3700 becoming the next support area. 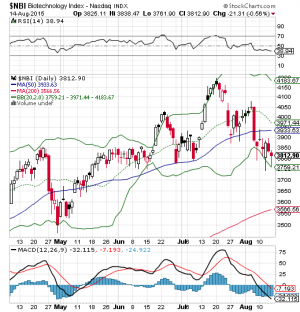 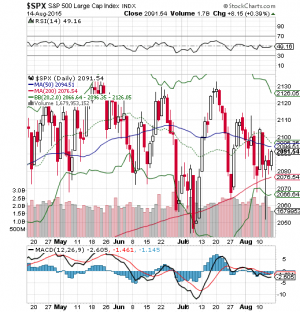 On the positive side, if this is a temporary correction, it may give us a good opportunity to buy some individual stocks that have pulled back to more attractive prices.

No matter what, now is the time to pay close attention to how the stocks in our EBIS portfolio are doing as well as looking for other stocks to add to a Buy list.  As the EBIS list shows below, the stocks in our portfolio held up fairly well during the selling spree last week. This is due to the fact that, all but Neurocrine Biosciences (NBIX), the EBIS portfolio companies that we are currently recommending feature products used for research, testing, and patient monitoring.  They are also profitable and delivered credible earnings and positive guidance in their most recent quarter.   Also important is the inclusion of the inverse biotech ETF (BIS) as a hedge.  Those who have followed that directive are likely to have fared better in the past couple of weeks.  Here are three sensible things to do in the short term:

Greatbatch is a restructuring story which looks ready to move higher over the next 6-12 months.  The company manufactures medical equipment under contract to original equipment manufacturers with a focus on the cardiac pacemaker, orthopedics, and spinal cord stimulation segments.  And, here is the twist; it also manufactures batteries and electronic equipment for oil drilling rigs.

GB gets an 8 EBIS rating, garnering a BUY recommendation.  The company has a diversified product line and has been making strategic acquisitions and selling off unprofitable business lines as it restructures.  And here is the big news.  Even as GB moves through a transitional period, in a challenging environment, it has continued to make money.   Consider the following:

Our EBIS portfolio held up fairly well in the week that ended on 8/14/15 despite a volatile market and selling pressure in the biotech sector.  See details below:

MASI reported adjusted earnings of 43 cents per share, 13 cents ahead of expectations in the second quarter of 2015, while revenues came in at $ 155 million ahead of the $147.93 million estimate.  The company raised its full 2015 guidance to total revenues of $621 million, up from $608 million and earnings per share from $1.48 to $1.51.    The stock remains well within its buying range of 40-44 and keeps a 9.5 EBIS rating based on its June 2015 quarter.  MASI is a well run company with plenty of cash on its balance sheet and a growth agenda.  We like Masimo because it has innovative products, an excellent growth rate, and a nice stash of cash on its balance sheet which it could use to make acquisitions or to plow into research and development.

Earnings/Dividend update:  VIVO met its earnings expectations on 7/23 but fell short on its revenues estimates. The company delivered net income of $9.1 million, 22 cents per share on revenues of 48.2 million vs. expectations of 48.9 million.  Management reaffirmed expectations for the full year of revenues of $193 to $200 million. The stock remains near the lower part of its trading range.   Vivo paid dividend of 0.2 per share on July 20th. The dividend yield is a nifty 4.4%, while the stock price is not particularly volatile. This is a combination which makes having a long term perspective worthwhile.

VIVO has a market cap of $767 million but is a consistent money maker.  The company develops, manufactures, and markets diagnostic testing kits focused on gastrointestinal infections, virus detection, and parasitic illnesses.  It also produces reagents and key testing and DNA amplification and enzyme related materials used in research.  It has recently released a new product, the Para Pak single vial transport system for parasite testing which simplifies the transport of samples to the lab by using one vial instead of the more complicated multiple package systems that are currently on the market.

We expect VIVO to benefit from the global immigration trend and the potential for infectious diseases to expand their territory via travel related transmission channels.  The company has a well established global platform including a recently opened office in Beijing (January 2015).  Dr. Duarte owns shares in VIVO.

The stock has the potential to move to the 55-58 area over the next few weeks to months.  We originally highlighted NBIX in our 5/29/15 update.  We like the stock based on the prospects of its Elagolix drug for treating endometriosis a condition of pre-menopausal women linked to the menstrual cycle and pelvic pain.  Dr. Duarte owns shares in NBIX.  Neurocrine is also advancing phase III clinical trials of its NBI-98854 drug aimed at the degenerative neurological disease tardive diskynesia.   Neurocrine expects further input on Elagolix by early 2016.

Neurocrine is a speculative stock. This is a research stage company with no products on the market but several potential blockbusters at key stages of development and nearing the FDA approval process.

RGEN is the world’s leading producer of Protein A, the basic component of monoclonal antibodies used for research and biopharmaceuticals manufacturing.  Biogen and other major drugs are based on monoclonal antibodies (MAB). If the number of new MAB drug candidates decreases it could affect RGEN’s earnings for the future.

In a recent presentation, spring 2015, the company reiterated its expectations for rising organic growth rates in the 25-29% range due to recent and scheduled product launches.  The company also noted that they have 350 potential molecules in their pipeline.

Emergent Biosolutions – Buy up to $34.

EBS announced receiving a $44 million contract from the Centers for Disease Controls to increase the supply of smallpox vaccine.  The previous week EBS announced a $19.7 million two year contract from the Biomedical Advanced Research and Development Authority (BARDA) on July 20th  an agency of the U.S. Department of Health and Human Services.  EBS also makes BioAnthrax, a preventive anthrax vaccine and is working on a new generation of the vaccine.  Dr. Duarte owns shares in EBS.

Bio-Rad beat estimates for its most recent quarter on August 6. Revenues were $506.1 million, down 5.7 percent compared to $536.8 million reported for the second quarter of 2014.  Net income was 0.97 cents per share.  Estimates were for revenues of $498.85 Million and earnings of 78 cents per share.  Biorad’s guidance was sketchy as they cited currency effects as being increasingly negative in the future.

Companies large and small are pulling back their horns as they mull the effect of decreased payments for therapies from third party payers as the Affordable Care Act and its effects dig in.