A Tale of Two Markets

The Big Picture: A Tale of Two Markets: S & P Gets Crushed. Biotech Holds Up.

The week of December 21, 2015 promises to be significant for our “EBIS” and “Trading” portfolios as last week’s action in the markets shook things up a bit. We also have our monthly new addition to our EBIS portfolio and updated information on our Trading Recommendations.   But first, let’s have a look at the big picture.

The Federal Reserve finally raised interest rates and the markets responded with increasing volatility. Simply put, there are too many external and internal variables all vying for investors’ attention in a market that is increasingly illiquid and fraught with rising risk from the growing deployment of robotic trading strategies. That does not mean that sound analysis and strategies can’t lead to success. It just means that we have to be very cautious and disciplined regarding where we put our money to work. 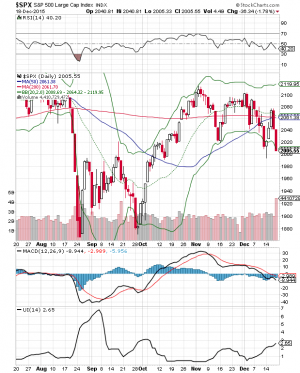 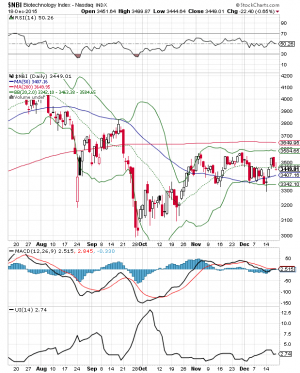 The S & P 500 (SPX) has the look of a boxer on the ropes while the Nasdaq Biotech Index (NBI), in comparison, had a quiet week.   The tale of the tape is best explored through the Ulcer Index (UI), the indicator at the bottom of both charts. A rising Ulcer Index means that risk is also rising, such as with the S & P 500. More important is the notion that the UI is barely off of its recent bottom, which means that we could see more downside action in the broader market. If you look at other indicators, you can see that the S&P 500 also closed last week below its 50-day and 200-day moving averages and other momentum oscillators (i.e., MACD and MACD histogram) are also suggesting that further weakness lies ahead.  The NBI chart is much more benign and suggestive of an index that is in consolidation mode. This is interesting and will be worth watching in the next few days and weeks. If biotech fails to fold, especially if the market continues to spiral downward, it will be very positive development.

Anything is possible here so we are erring on the side of caution. Here is what to do:

Our trading recommendations are delivering excellent results at the moment. We added three new stocks as of 11/30/15 and a fourth candidate on 12/14/15. The sell-stops on open positions have been adjusted to reflect the closing prices of the week that ended on 12/18/15.

Trading stocks are only recommended as trades based on technical analysis and momentum.   These are not stocks meant for long term holding periods.

Active Trading Recommendation: Otonomy Inc. (OTIC) – Buy Range $27-$30. Initial recommendation for this stock was 12/14/15. Bought 12/14/15 at $27.42. 12/18/15 closing price $29.33. Sell Stop $25. This company could change the course of treatment of ear infections in children, and perhaps even adults over time. It received FDA approval for its extended release version of the antibiotic Ciprofloxasin (Cipro) under its own brand name of Otripio. The initial indication is for use in surgeries after ear tubes are placed in children. The company has several key trials in place for expanded uses.

Active Trading Recommendation: Invacare (IVC) Trading Buy Range $19-$21. Bought 11/30/15 at $19.70. 12/18/15 closing price $17.43. Sell stop $17 (based on 12/18/15 closing price). Recommended 11/30/15. Invacare makes hospital beds, electric wheelchairs and related devices. The stock looks poised for a breakout. It fails to make the EBIS cut based on its lack of profits and having more debt than current assets. It is, however, the type of stock that can rise when the market decides to buy everything related to a particular sector. It also has a knack for growing its revenues.

Waiting to Enter Buy Range – Trading Recommendation: Bio-Rad Labs (BIO) Trading Buy Range $142-$146. Sell stop $138 (based on 11/27/15 closing price). Recommended 11/30/15. For every dollar of price increase, raise the stop loss by $1. Bio-Rad is a former EBIS stock which got caught in the early fall selling spree.   The stock has formed a lengthy base and is showing signs of joining the current biotech sector rally. We currently like it based on its technical activity.

Waiting to Enter Buy Range – Trading Recommendation: Vertex Pharmaceuticals (VRTX) Trading Buy Range $134-138. Sell stop $128 (based on 11/27/15 closing price). Recommended 10/26/15. For every dollar of price increase, raise the stop loss by $1. Vertex makes a leading cystic fibrosis drug and has steady revenues. Unfortunately it still has more debt than assets so it doesn’t make the EBIS cut. It is a good momentum stock when it gets going, though. And it looks as if it’s ready to join the current biotech rally.

Novo Nordisk, based in Denmark, is to Diabetes treatment what Gene Simmons is to KISS, sort of the glue that holds the thing together. And although it’s a large cap stock ($144 billion), it’s not a household word. Yet, diabetics know it because it makes both medications as well as equipment for delivering medication for diabetics. It’s also a mainstream pharmaceuticals company with footprints in hormone replacement therapy, growth hormone treatments and treatments for hemophilia. The company’s semaglutide drug recently delivered improvement in long term glucose control in a Phase 3 trial. Semaglutide also leads to appetite suppression and weight loss, a key component of the treatment in Type 2 Diabetes.

NVO gets a top shelf + 9 EBIS rating because it’s a well run company with a single focus and a top entry in all areas of its niche, Diabetes. It is not a small stock, but it is an EBIS stock because of its focus and its ability to deliver. And in a difficult market it could provide a bit of a safety net compared to other more speculative buys.

The EBIS system consists of eleven fundamental criteria that are updated every quarter after the earnings results for each company are published. Each criterion gets a value of +1 or zero. A total of 8 or more points earn a Buy rating. A total of 5-7 points earn a Hold rating. Less than 5 points delivers a Sell or Avoid rating. EBIS was introduced in the June 15, 2015 issue of the Biotech Report.

Our EBIS portfolio has been more volatile of late. Generally speaking it makes sense to see if these stocks develop some type of sideways pricing action before adding to any position aggressively. Details below:

Alert: Emergent Biosolutions – Upgraded to BUY. Buy Range $37-40. The upgrade is based on technical trends and relative strength which suggests that institutional buyers are coming into the stock. The company could also be attracting attention based on its standing as a defense stock as terrorism awareness is on the rise.

EBS continues its momentum run but retains its HOLD rating. This remains a defense play given its niche in bioterrorism related vaccination. The company is also selling treatments for chemical weapons related injuries overseas, but not yet in the U.S. The company reported its latest earnings on November 5 after the close and beat expectations delivering 83 cents per share in net income on revenues of $164.9 million. Estimates average $151.42 million in revenues and 56 cents per share.   EBS has a history of positive surprises. The company reported earnings of 36 cents per share for its second quarter of 2015 beating analyst estimates of 26 cents. Revenues climbed 14% from the year-ago period to $126.1 compared to an estimate of 124.25 million.   The company also announced that it will spin off its biosciences unit, whose focus is oncology to investors.

Sales of BioAnthrax, a preventive anthrax vaccine and is working on a new generation of the vaccine were strong in the quarter while overall bio-defense sales slumped. Dr. Duarte owns shares in EBS.

Update: MASI beat earnings on 11/5/15. Earnings came in at 36 cents per share on revenues of $152.6 million. Analysts estimated an average of $149.31 million in revenues and 31 cents per share in earnings. MASI beat expectations and gave upward guidance for the future. The company recently received good marks on its anesthesia monitoring equipment at the recent American Society of Anesthesiologists meeting in San Diego.

This is the second straight quarter that the company beat expectations. The company raised its full 2015 guidance to total revenues of $621 million, up from $608 million and earnings per share from $1.48 to $1.51.   The stock remains well within its buying range of 40-44 and keeps a 9.5 EBIS rating based on its June 2015 quarter. MASI is a well run company with plenty of cash on its balance sheet and a growth agenda. We like Masimo because it has innovative products, an excellent growth rate, and a nice stash of cash on its balance sheet which it could use to make acquisitions or to plow into research and development.

Meridian made news on Friday the 13th of November when it disclosed a minority stake in Oasis Diagnostics a company that specializes in diagnostic tests that use saliva as the medium for testing. On November 18th the company received FDA approval for an expanded use of its Illumigene whooping cough testing product, a move that will expand Meridian’s market share and customer base. There were 33,000 whooping cough infections reported in 2014, a 15% increase compared to 2013.

Meridian delivered a mixed earnings report on November 5, 2015, beating on revenues at $47.5 million and missing on its net income by one cent at 20 cents per share. Estimates averaged $46.64 million in revenues and 0.21 cents per share for earnings.   This was a reversal of the previous quarter. The stock paid a 20 cent dividend on 11/12/15 and yields 4.4%.

VIVO develops, manufactures, and markets diagnostic testing kits focused on gastrointestinal infections, virus detection, and parasitic illnesses. It also produces reagents and key testing and DNA amplification and enzyme related materials used in research. It has recently released a new product, the Para Pak single vial transport system for parasite testing which simplifies the transport of samples to the lab by using one vial instead of the more complicated multiple package systems that are currently on the market.

Handcuffed, wearing a grey hoodie and sunglasses, Martin Shkreli walked out of Turing Pharmaceutical’s life as the FBI arrested him for allegedly participating in a Ponzi scheme. In what could be the beginning of a new leg in a bizarre saga, the FBI alleged that Mr. Shkreli used shares of a company he founded, Retrophin, to pay back investors for losses he created while running a hedge fund into the ground. According to Fierce Biotech, based on information obtained via a pending lawsuit filing, “Shkreli and his ‘close personal associates’ drew up a sham consulting agreement” which guaranteed a disgruntled hedge fund investor “66,000 shares of Retrophin and $200,000 of the company’s cash with no expectation of any actual consulting.”

Mr. Shkreli first made headlines several weeks ago when his former company, Turing Pharmaceuticals, raised the price of a malaria drug to $750 per pill from the previous price of $15. As Yogi Berra would have said, this one “ain’t over til it’s over.”