Is the S&P 500 Nearing a Breakout to the Upside?

In my most recent Technical Nuggets column, (August 1, 2016) I noted: “Lower interest rates have created momentum conditions where higher prices continue to bring in buyers.  This momentum dynamic has pushed this bull market much further than anyone could have expected and the current trend remains up but is showing signs that a correction may be approaching.”

Since then, all of the U.S. major indexes made all time highs on August 11, 2016. Yet, on the next day the economic data showed an economy that is much weaker than many realize as producer prices and consumer confidence sank while the world’s largest shipper, Maersk, reported a nearly 90% decrease in its year-over-year profit.   Something has to give, and when investors decide that economic fundamentals do count we could see a significant decline in stocks.  That said, we may not be anywhere near that point yet.

Low Volatility Suggests Big Move is still on its Way

I’ve been writing about low volatility for several weeks, and how it is a prelude to a big move. This week I am featuring the Bollinger Band indicator (BB) and its relationship to the S&P 500 (SPX).   This indicator can be useful in marking periods when the market has gone too far to the upside or downside, or when it’s about to make a significant move.  In its current positioning, it is suggesting that a big move is coming.  It is not a good predictor of the direction of the move, but other indicators – as I will show just below – can often be helpful in figuring the direction of any breakout.

Bollinger bands are essentially dynamic price channels that are traditionally configured two standard deviations above or below a moving average.  They are built on the premise that prices can’t deviate from the mean (moving average) forever and that when prices move too far in one direction – up or down – they will reverse direction.  You can use any moving average such as the 10, 20, 50 or 100-day trend lines along with the bands.  For this example I will use the 20-day moving average (green dotted line) since it is the most commonly used moving average when looking at the intermediate term (weeks to months) trading activity of the market. 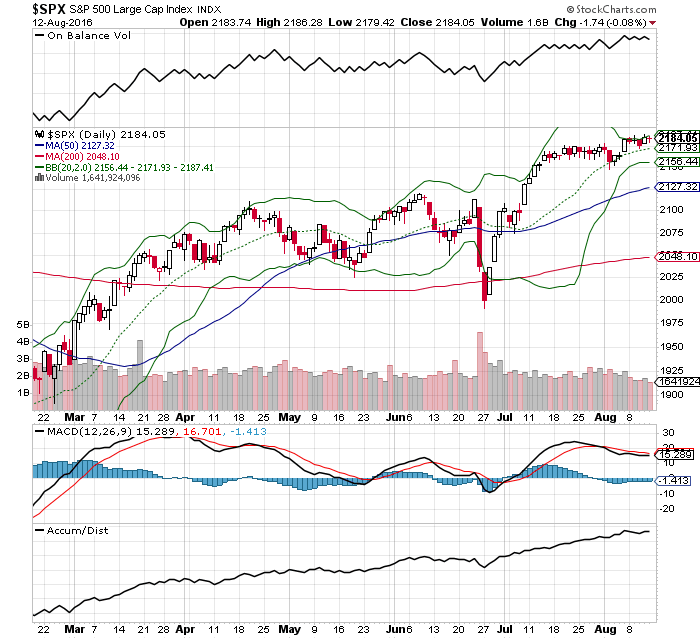 First, let’s look at the Bollinger Bands, the green lines above the S & P 500 over the past few months and see how they have worked.  Note the following in the chart:

Next, let’s look at the other important indicators on this chart:

If the Bollinger Bands and the other indicators are correct, I would expect the next move in the S&P 500 to be to the upside, and I would expect it to be very significant.   As a trader I would look to the price behavior of this index to warn of a reversal when prices rise above the upper Bollinger Band.  There are no guarantees when trading or investing.  But money has clearly moved into this market and when enough money moves in the buyers eventually overwhelm the sellers. We could be near one of those points.