Investors may have some big decisions to make in the next few days as the stock market reacts to an increasingly likely rate hike from the Fed, perhaps as soon as next week. So, in this column, let’s take a look at the stock market and identify the major reason why it took such a beating last week: the bond market.  There is an old saying on Wall Street: when stock traders are talking about the bond market, things just aren’t right.  And that’s what happened on September 9, as Boston Federal Reserve Governor Erik Rosengren noted that higher interest rates should come sooner rather than later, albeit at a “gradual” pace.  Mr. Rosengren’s words quickly led to a very aggressive bout of selling in the bond market and stocks followed suit.

Should We Be Surprised?

Some may be shocked about Friday’s action, but they shouldn’t be.  There has been no shortage of warning signs of late and the times are very strange.  For one, this bull market is way too long in the tooth and the economic fundamentals are deteriorating in the U.S. despite near zero interest conditions for what seems to be the past millennium.  Additionally, consider the antagonistic nature of the ongoing in the presidential election and it’s clear that something will eventually give way with predictably unpredictable consequences.

I warned about the market’s complacency in my August 15 column where I noted:  “We may be nearing a period of increased volatility.  There are several momentum, money flow, and price indicators that suggest that the market is starting to weaken. And the Federal Reserve has made it clear that it is interested in raising interest rates, and that perhaps it may do so in September, which is traditionally the most dangerous month of the trading year.”

Let’s look at stocks first.  This bull market has been fueled by record low interest rates, plain and simple.  And while some individual companies have done extremely well and been justly rewarded with higher stock prices, as a whole, company earnings and economic activity have not justified the gains that have occurred in the total stock market that during the past several years.  Thus, it’s no surprise that investors are increasingly anxious. 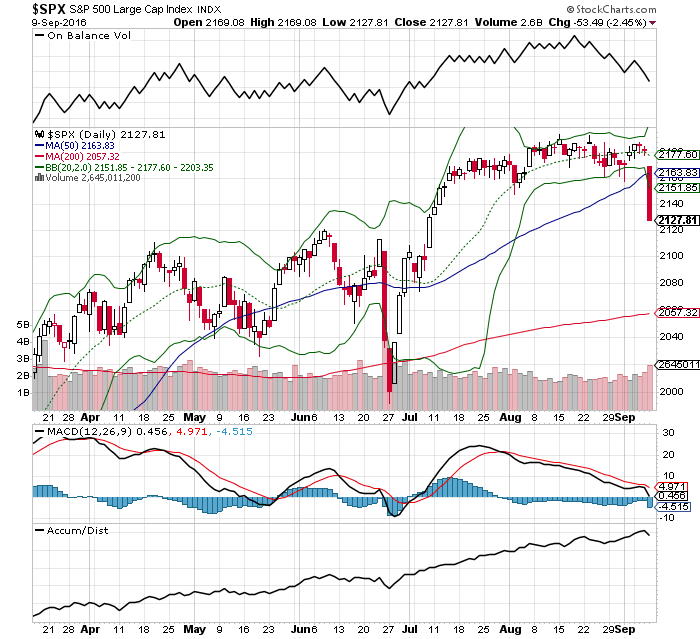 Rising Interest Rates Are Once Again Bad for Stocks

When the Federal Reserve threatens to raise interest rates, the bond market has two choices. It can ignore the Fed as it has in the recent past, or it can pay attention to the Fed and start selling bonds.  When traders sell bonds, two things happen; the price of the bond falls and the yield (the interest rate attached to the bond) rises.  Stock prices historically fall when bond yields rise, but this relationship has been less reliable since the Fed has kept rates near zero for the past few years. What makes the recent sell-off most interesting is that as the chart below shows, this relationship may be operational once again. 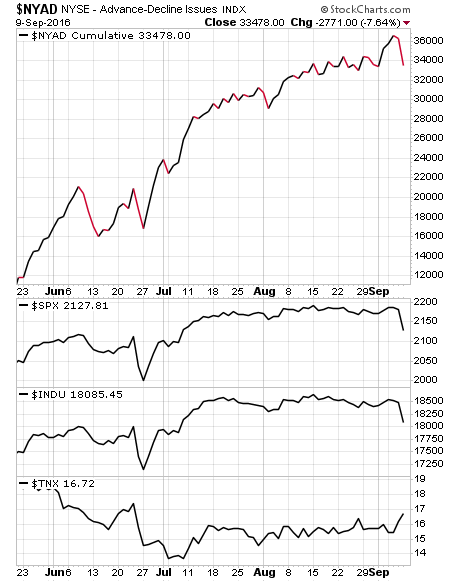 The top panel is the New York Stock Exchange Advance Decline Line (NYAD), the difference between the number of stocks that advance and the number of stocks that decline on the NYSE on a daily basis plotted in graphic form.  Over time, the direction of the line is an excellent predictor of where the overall trend of the stock market is likely to go.  Note that despite some recent declines, the NYAD has recovered and remained on an uptrend.  This is because bond yields have been moving sideways (bottom panel), and the threat of higher interest rates from the Fed has been seen as minimal.  Note also that the price of the S&P 500 (SPX) and the Dow Jones Industrial Average (INDU), the first and second sections of the lower part of the chart, have been moving sideways while the NYAD has been moving higher.  The key here is that the indexes had not dropped as long as the NYAD rose, but also did not break down because the bond market had been steady.

All that changed on Friday.  Bond yields rose, while the stock indexes and the NYAD fell aggressively.  Note also that Friday’s climb in bond yields seemed to do more damage to the indexes than to the NYAD.  This last observation may be useful in the next few days, as it could signal that this may be a short term pullback in stocks.   Only time will tell.

It Could Be a Bumpy Ride

Here is the take home message: This market’s reversal should not have been a surprise given the technical signals generated in the stock market.  Also, volatility is clearly on the rise as I expected given the narrow trading range over the last few weeks, which usually precedes an increase in volatility. Finally, and perhaps the most disturbing factor of all, is the activity in the bond market. When the negative price action in the bond market leads to negative price movements in the stock market, it usually means that there can be more unpleasant activity in the near future.

Unless things change, the recent market decline reinforces the strong historical inverse relationship between the stock and bond markets, which had been mostly absent over the past few years.  And if this relationship remains in place, things could get very bumpy. So, all things considered, this market looks vulnerable. But, I’ve learned that nothing is what it used to be. So it would not be surprising to see the robotically-driven, high-frequency trading algorithms come in and push stock prices right back to new highs.

Dr. Joe Duarte has been a professional investor and independent analyst since 1990.  He has appeared on CNBC, has published articles on Marketwatch.com and has been widely quoted in the major media including The Wall Street Journal and Barron’s magazine.  He is author of “Trading Options for Dummies,” 2nd Edition and “Trading Futures for Dummies.”  His second book was “Successful Biotech Investing.”