Technical Nuggets: Is There A Trump-Air Pocket Ahead?

The stock market is in a bit of a pickle, as is maybe the entire world. As the Trump inauguration nears, the war of words between the president-elect and just about everyone else is heating up and the potential for higher volatility is increasing in the markets. The stock market is particularly vulnerable to external shocks given its current valuation and the magnitude of the post – election rally, which means that the next few days are likely to be interesting, to say the least. But there are potential hiccups and signs of heartburn everywhere, especially in the bond and currency markets highlighted by weakness in the British Pound and volatility in the Chinese Yuan, where many crises that lead to selling in the stock market originate.

Dollar Folds Some but Does Not Break

A good place to start a politically-tinged analysis is with the U.S. Dollar. That’s because the dollar – even now – is considered a safe haven. After the Trump election the dollar rallied, and took the stock market with it. This was based on expectations for higher U.S. economic growth and higher interest rates. Things have cooled off some. Yet, the U.S. Dollar Index (USD) remains in an uptrend, although it has seen some selling lately. The fact that the dollar has not collapsed, despite all of the recent controversy swirling around Mr. Trump, suggests that what we are seeing right now is profit-taking but that there is still some expectation of a stronger dollar. 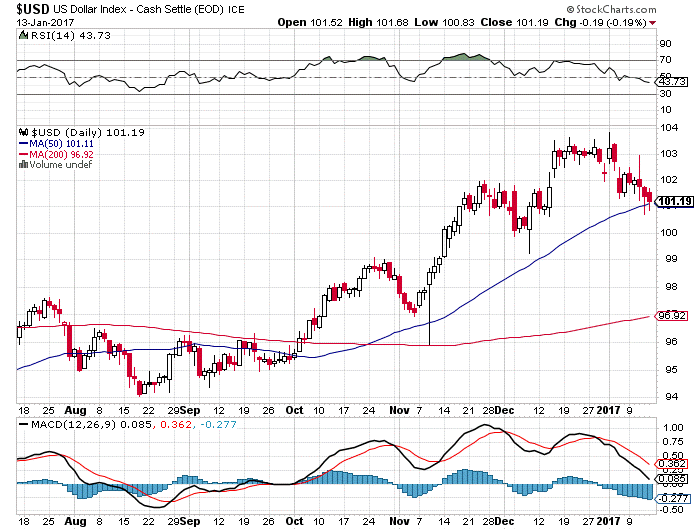 Regular readers are familiar with my go-to indicators; so here goes the rundown. The market is clearly in a consolidation phase, with – at least for now – a bullish tendency of sorts. This is because prices for the S&P 500 (SPX) are above the 20, 50, and 200-day moving averages. But that’s just the very big picture. Inside, there are some subtle points which need fleshing out.

The Bollinger Bands (green bands above and below prices in chart below) are narrowing and prices have not risen above or below the bands. This type of technical picture indicates decreased volatility at the moment, but also an indicator of increasing volatility at some point in the future. 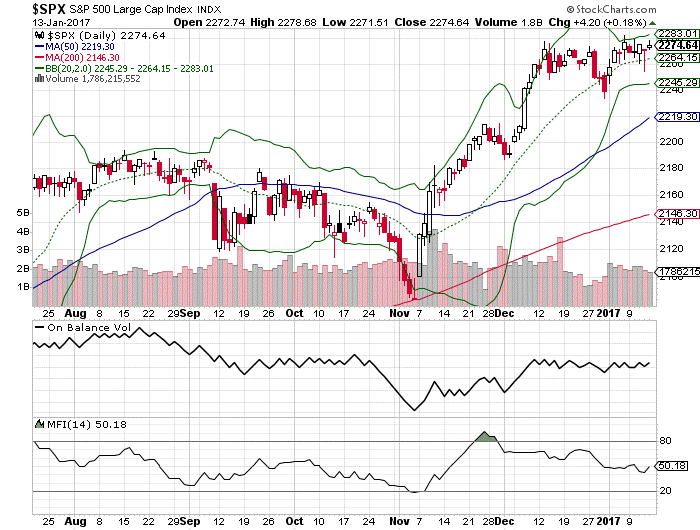 The other two crucial indicators – Money Flow index (MFI) and On Balance Volume (OBV) – are also moving sideways; another indication of investor indecision. The positive spin is that money in not flowing out of the markets in a hurry. The not-so positive angle is that money is not going in to the stock market in a very convincing fashion. In other words, lack of conviction from traders can quickly turn into aggressive selling.

Way inside the market, the NYSE Advance Decline Line (NYAD), the difference between the number of stocks that is rising and falling – also known as the market’s breadth – is in a very strong momentum run to the upside. Most recently, the NYAD has confirmed the breakout in the Nasdaq 100 Index (NDX, middle graph, lower panel). 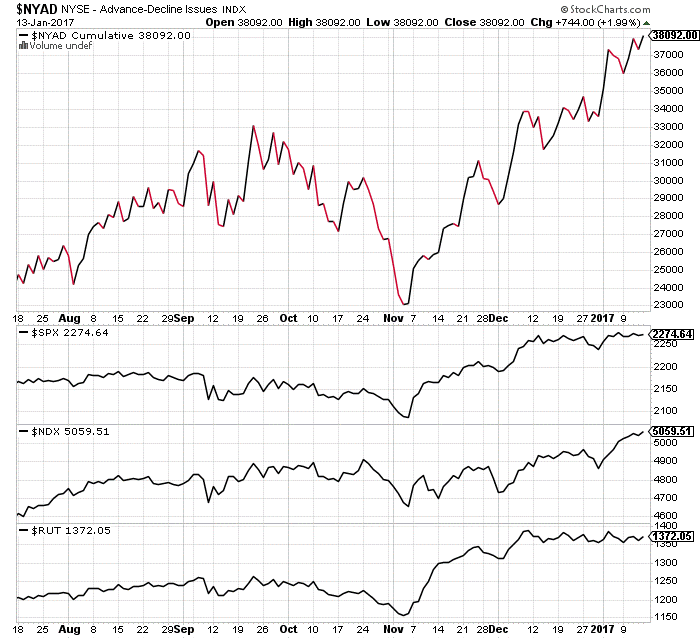 Meanwhile, the large-cap S&P 500 and the Russell 2000 Index (RUT) of small-cap stocks are consolidating, indicating that there is a rotation of money in the market which right now favors the big stocks in the Nasdaq 100 index. This is positive, but it not the answer to the question of what happens next.

The Mother of all Walls of Worry

It is said that the market likes to climb the proverbial Wall of Worry. Well, here we are at the base of the mother of all walls and with little to do but to see which way things break, which they most certainly will.

Plainly stated, the market is waiting to see what happens at the Trump administration. The closing technical data from January 13 suggests that the bias of any consolidation is for a resumption of price action to the upside. The problem is that technical data can’t predict things that haven’t happened yet. And with Trump in charge of the daily media, the potential for riots during his inauguration and other risks which include assassination attempts, global war breaking out, and a redefinition U.S. foreign policy and the repeal of Obamacare, among other things, anything is possible. So the big question is really whether there will be blood in the streets this week. But whose blood and where will it flow? More important to some, how will the markets respond? The answer is that no one knows. So, it’s a good time to be especially vigilant and very patient.