Do The Math! The Numbers Don’t Add Up

Revered value investor Benjamin Graham once said: “Buy not on optimism, but on arithmetic.” As the second half of the year gets underway, here’s the simple equation you need to keep in mind:

Stock valuations are relatively high but corporate earnings are projected to decline for a second straight quarter.

Analysts expect second-quarter earnings per share (EPS) of the S&P 500 to show a blended year-over-year decline of -2.8%. The negative projection follows a 0.29% EPS decline in the first quarter. An earnings “recession” is defined as two consecutive quarters of declines. The consensus also calls for negative earnings growth in the third quarter.

For now, the bull market continues. But amid this disconnect between valuations and earnings growth, can the momentum last?

Morgan Stanley (NYSE: MS) this week downgraded global stocks and projected “poor returns” over the next year, largely due to the trade war and softening corporate earnings. Morgan Stanley’s chief equity strategist predicts a 10% correction in the stock market during the third quarter.

Unless the gap between high valuations and projected weak earnings can be bridged, the stock market remains on shaky ground. Economic data on the docket for the coming week will provide clues (see table). 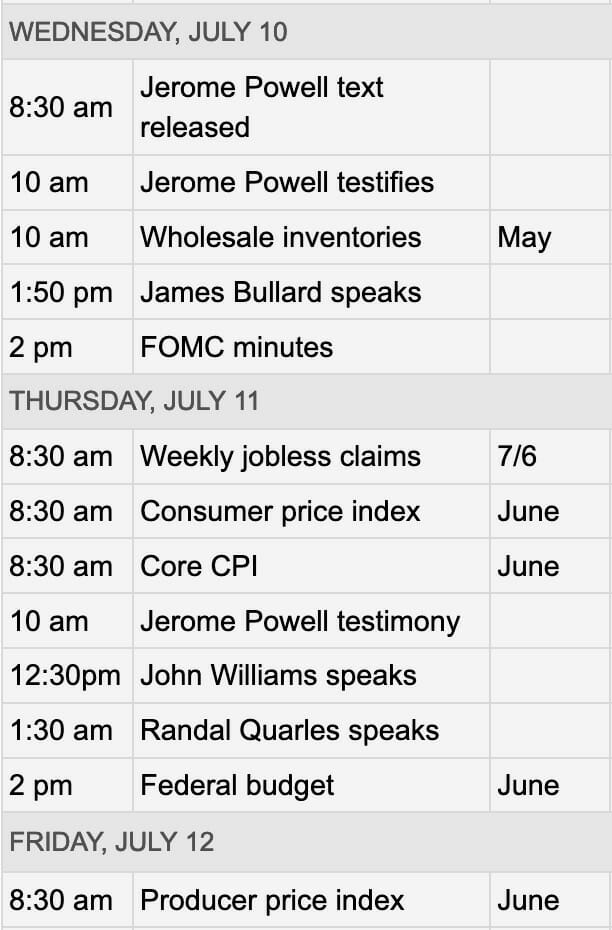 Closely watched barometers of economic health are on the docket this week that will guide the Federal Reserve in its fateful decision on money supply at its Federal Open Market Committee (FOMC) meeting July 30-31.

Federal Reserve Chair Jerome Powell Powell will give his semiannual monetary policy testimony on Wednesday before the House Financial Services committee and a day later to the Senate banking panel. The FOMC will release its June meeting minutes on Wednesday.

These Fed-related events will be carefully scrutinized by investors, who have been praying for an interest rate cut this month. You can expect the usual parsing of Powell’s words, as well as the usual market overreaction.

Read This Story: Will The Fed Play Santa in July?

The Fed this year has signaled a more dovish stance, although not enough to suit President Trump. Unless Powell indicates this week that another rate cut is in the bag (and I don’t think he will), the president will probably “rage tweet” against his own hand-picked Fed chairman.

You should ignore these social media theatrics; they merely give the Barbie and Ken dolls on CNBC something to yap about. Savvy investors know it’s just background noise. Stick to the math. 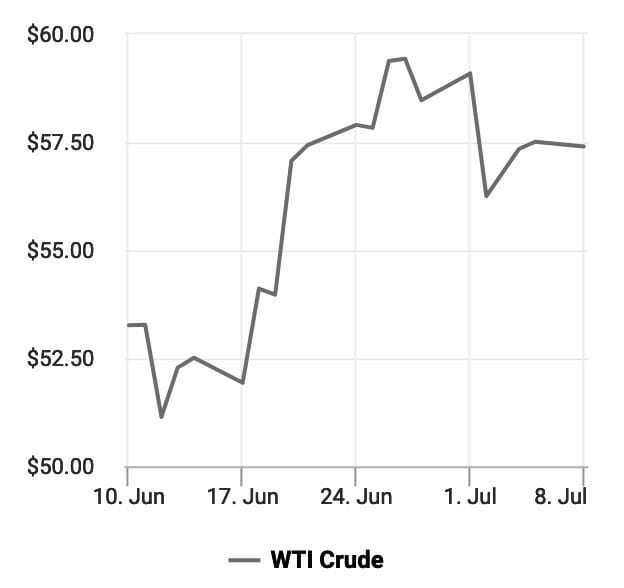 A wide disparity currently exists between the energy bulls and bears. The best and the brightest are all over the map; some analysts say the price of oil will soar in the coming months, whereas others contend it will collapse.

Energy is susceptible to sharp boom-bust cycles and it seems that the U.S. energy patch has once again gone overboard. Many shale drillers recklessly borrowed to boost production when oil prices were rising, but now they’re getting squeezed by poor financials and falling prices. Sound familiar?

According to a survey released June 26 by the Dallas Federal Reserve, falling oil prices have dampened spending and drilling among shale producers. Experts are expecting a wave of bankruptcies this year among these producers, who apparently have forgotten the lessons of the past.

As energy volatility unnerves Wall Street, the flight to safety will continue. One classic safe haven that benefits is the utility sector.

Utes get charged up…

The Federal Reserve’s dovish pivot has been especially beneficial for utility stocks, which thrive when interest rates are low.

With interest rates still at low levels and growth stocks overvalued, high-dividend utilities are an especially attractive hedge right now. The utility sector has been on a tear so far this year and it’s poised to continue outperforming.

But economic growth that’s only good and not great, as we’re currently experiencing, is manna for utilities. “Goldilocks” growth (not too hot, not too cold) is their sweet spot. Growth has been strong enough to sustain revenue and profits, but insufficiently robust to prompt the Fed to raise rates.

That’s a lucky break for utilities as well as the broader market, because otherwise the 10-year bull market is on weak legs. As mentioned above, it’s a bad sign that we’re experiencing weak corporate earnings in the context of high stock valuations.

In fact, actual corporate earnings reports so far have been worse than expected. With 21 of S&P 500 companies, or 4.2%, having already reported results, actual reported EPS is down 14.1% from a year ago. A major reason cited by corporate management is the trade war that the U.S. is waging against…well, against almost everybody.

It’s not just China. When peaceful, democratic Canada is held up by U.S. trade negotiators as a big bad villain, you know we’re in uncharted waters. The United States-Mexico-Canada Agreement (USMCA), which replaced the North American Free Trade Agreement (NAFTA), still needs to be ratified by the legislatures of the U.S., Canada and Mexico.

Quick side note: although the White House touts USMCA as a vastly better deal, it barely differs from NAFTA. As I keep advising you, tune out the political gamesmanship and keep your eye on the hard data.

The U.S. Congress this month is struggling to muster the votes for USMCA ratification, but opposition remains, especially from Democratic members who want greater protections for American workers. Chaos over trade policy is undermining business confidence; this uncertainty will only grow worse as the 2020 election gets closer.

Another wild card: the U.S. government could run out of money by early September if Congress doesn’t raise the debt ceiling. The Treasury Department is on track to breach its borrowing limit much sooner than expected because the 2017 tax bill has crushed incoming revenue.

A looming government shutdown? Ugh. We’ve seen that movie before.

Sure, risks are mounting. But the investment road from here requires vigilance, not undue fear. As long as the global economy continues to exhibit growth, you can still find reasonably valued stocks with plenty of upside left. In the meantime, you need to brace yourself for the inevitable bumps along the way. More than ever, it’s prudent to take a page from Benjamin Graham and emphasize intrinsic value.