Buy on the rumor, sell on the news. We saw that dynamic in action today on Wall Street.

Pundits in recent weeks have obsessively chewed over Federal Reserve policy, sort of like my Maine coon with his catnip toy. So when the U.S. central bank finally handed investors the interest rate cut they’ve been praying for, stocks actually fell. Go figure.

The U.S. central bank this afternoon announced a quarter-point cut (25 basis points) in its benchmark short-term rate, to a range of 2% to 2.25%. Today’s cut was the first in more than a decade, following nine quarter-point rate increases from December 2015 to December 2018.

For months, President Trump has been fiercely lobbying the Federal Reserve for a much deeper cut than the one we got today. The stock market created the “rumor” for an interest rate cut, which has helped keep stocks aloft. Investors got their cut today and started selling on the news.

The modest size of today’s cut met expectations but investors were disappointed by Fed Chair Jerome Powell’s remarks at his post-meeting press conference. Powell didn’t rule out further cuts, but he said nothing to suggest they would be forthcoming. As I’ve warned you, investors have been setting themselves up for disappointment by placing high hopes on aggressive easing.

Read This Story: Want a Rate Cut? Careful What You Wish For

Powell in future months will be hard-pressed to prove that the Fed’s move today wasn’t the result of political capitulation. As investors inferred from Powell’s performance today at his press conference, further rate cuts this year are unlikely.

“We are thinking of it as a mid-cycle adjustment to policy,” Powell said. “I’m contrasting it with the beginning of a lengthy cutting cycle.” That’s not what investors wanted to hear.

The stage for the rate cut was set by Trump — not necessarily by his relentless jawboning but by his policies. Tariffs initiated by the White House are weighing on the economy, which has strengthened the case for stimulus.

The government last week reported that U.S. gross domestic product (GDP) grew at a 2.1% pace in the second quarter, amid the first decline in business investment since 2016. In the first quarter, GDP grew at a more robust 3.1% pace.

The Fed’s so-called Beige Book, a periodic collection of anecdotal economic data from around the country, has been reporting the damage from tariffs to corporate earnings and business confidence.

However, today’s rate cut could pose problems down the road, by planting the seeds of inflation and limiting the Fed’s options when the recession finally hits.

The demise of Goldilocks?

Right now we’re enjoying a Goldilocks moment of not-too-hot, not-too-cold growth. But we’re already seeing signs that the economy faces bigger trouble ahead, although maybe not to the degree that warranted today’s rate cut. Regardless, corporate earnings growth is losing steam.

Goldman Sachs (NYSE: GS) predicts that earnings growth in 2019 for S&P 500 companies will slow to 3%, a dramatic drop from the 23% posted last year when Trump’s tax cuts propelled profit gains.

The cost of tariffs has been squeezing corporate margins, while at the same time demand from regions such as Europe and China is sputtering.

President Trump spooked investors yesterday when he posted a series of tweets that suggested the trade war is far from ending. In response to reports that China has adopted a strategy of waiting out his administration, Trump tweeted:

“The problem with them waiting, however, is that if & when I win, the deal that they get will be much tougher than what we are negotiating now … or no deal at all.”

FactSet Geographic Revenue Exposure data, based on the most recently reported fiscal year data for each company in the S&P 500, divides the index into two segments: companies that generate more than 50% of sales inside the U.S. (less global exposure) and companies that generate less than 50% of sales inside the U.S. (more global exposure).

Not just a war of words…

As the following chart shows, the trade war isn’t just a lot of angry rhetoric. Trade sanctions recently put in place by both the U.S. and China are taking their toll on profits. 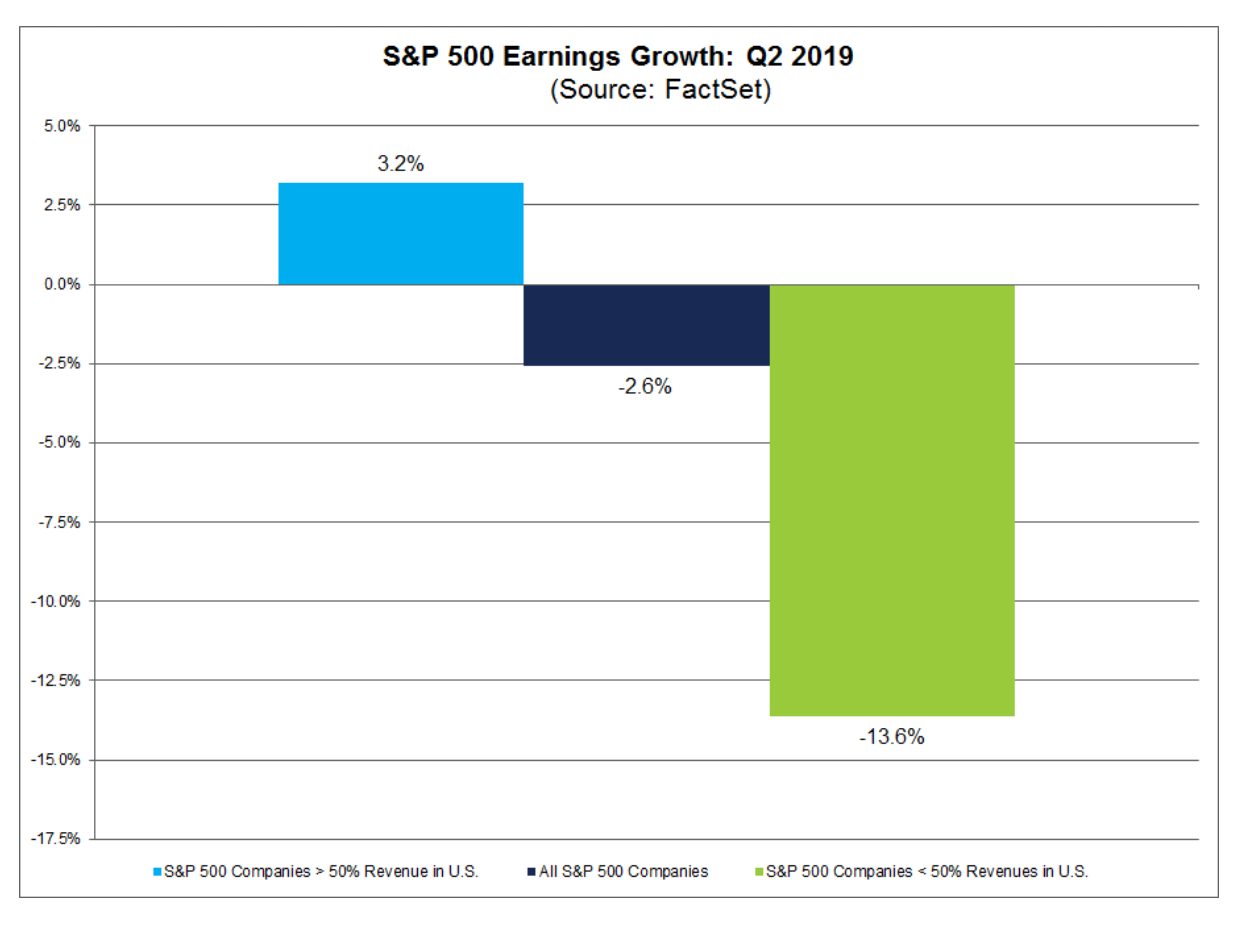 Consumers are in a spending mood, encouraged by low unemployment and wage gains, but analysts increasingly warn that a recession lurks on the horizon.

According to Ned Davis Research, the utilities, consumer staples, and telecommunications sectors have outperformed in the 12 months leading up to the start of a recession, which means they’re the smart places to be now.

Rate sensitive sectors such as utilities and real estate benefit from a rate cut. Dividend stocks also benefit, because their yields become more attractive compared to bonds and other income-generating assets.

For investors of all types, the familiar mantra of “Don’t fight the Fed!” was proven true again today.