One of my favorite crime movie clichés is when a suspect who’s getting interrogated asks a question and a hard-bitten detective barks: “We ask the questions around here!”

I usually ask the questions around here. But not always. For this week’s Big Interview, my colleague Jim Pearce suggested that he turn the tables and interview me for a change.

Jim is the chief investment strategist of our flagship publication Personal Finance. I can always count on him for incisive thinking.

As news events take potshots at investors, you need to “bulletproof” your portfolio. Below, I discuss protective (but profitable) steps to take now.

Jim Pearce: The U.S.-China trade war gets a lot of press coverage. What’s the media missing?

John Persinos: The U.S. trade deficit with China reached a record high of $419.2 billion in 2018. President Trump and many media pundits decry this deficit as “bad.” But it’s not as if that money were lost.

Yes, Beijing flouts trade rules. China subsidizes domestic manufacturing, erects barriers to its market, and steals intellectual property. The West should bring the country to account. But tariffs are a foolish way to do it. They’re a tax ultimately paid by businesses and consumers.

President Trump and President Xi Jinping had better find a way to resolve these trade disputes or we’ll shatter the multilateral system that has given the world peace and prosperity — and robust investment returns — since the end of World War II.

In the past, corporate executives and the U.S. government were willing to look the other way at China’s trade transgressions, because the country supplied us with cheaply made goods like t-shirts and tennis balls, while in return China purchased our aircraft and high-tech equipment.

But that started to change as China’s middle class grew, along with the country’s ambitions as a world power. America got nervous when China in 2015 unveiled its plan, “Made in China 2025,” which seeks to shift China from a low-end manufacturer to a high-tech powerhouse that provides value-added goods and services.

This blueprint calls for China to give up selling the inexpensive stuff you find on the shelves at Walmart, which increasingly is getting made by lower-wage countries such as Vietnam and Pakistan.

Trade tensions between the U.S. and China go beyond the Trump administration’s desire for the Chinese to import more goods from the U.S. We’re witnessing a “great power” struggle between America and China that will likely last for many years. It’s not just about American jobs. Global hegemony is at stake and that’s an under-reported angle in the media.

If tariffs don’t work, what should the U.S. do?

Line up our allies in the West in a united front. They’re encountering the same trade problems with China. Get the European Union and Asian countries on our side and then approach the Chinese and tell them, let’s make mutually beneficial rules. Do it quietly via back-channels, so no one loses face.

Make it a case of the world versus China. But instead, the U.S. has alienated even its allies and has chosen to go it alone. “America First” could become “America Last,” and investors will be poorer for it.

The Fed on July 31 announced a quarter-point cut, which is 25 basis points, in its benchmark short-term rate, to a range of 2% to 2.25%. The cut was the first in more than a decade, following nine quarter-point rate increases from December 2015 to December 2018.

Was it too much or too little? Frankly, I don’t think the cut matters much. Powell hasn’t ruled out further cuts, but he has strongly suggested that there won’t be any more cuts this year. Last week’s cut was a modest form of “insurance” against economic damage created by the trade war and it also was capitulation to Trump’s intense pressure to ease.

But now the Fed will probably stand pat, to protect its reputation for independence and to ensure it doesn’t overstimulate and stoke inflation. The Fed also wants to have tools at its disposal when the recession hits.

Since 1977, the Federal Reserve has operated under a mandate from Congress to “promote effectively the goals of maximum employment, stable prices, and moderate long term interest rates.” The Fed rarely gets this balancing act just right, but lately I think Powell has been making prudent decisions. Investors shouldn’t count on further rate cuts.

How can investors protect themselves right now, but still make money?

First of all, stay invested! There’s still money to be made in the market, but until this global disarray subsides, you should make defensive moves.

Read This Story: How to Trade in the New Era of Chaos

Calibrate your portfolio away from export-dependent manufacturers. This earnings season, blue-chip industrial firms are among those reporting the biggest hits to earnings, largely because of the added costs and uncertainties of tariffs.

Second-quarter earnings are expected to come in negative and projections for the third quarter are getting more pessimistic.

During the month of July, analysts lowered earnings estimates for S&P 500 firms in Q3. The Q3 bottom-up EPS estimate (which is an aggregation of the median EPS estimates for all the companies in the index) dropped by 1.6% during this period.

The following chart shows how this decrease compares to recent quarters. 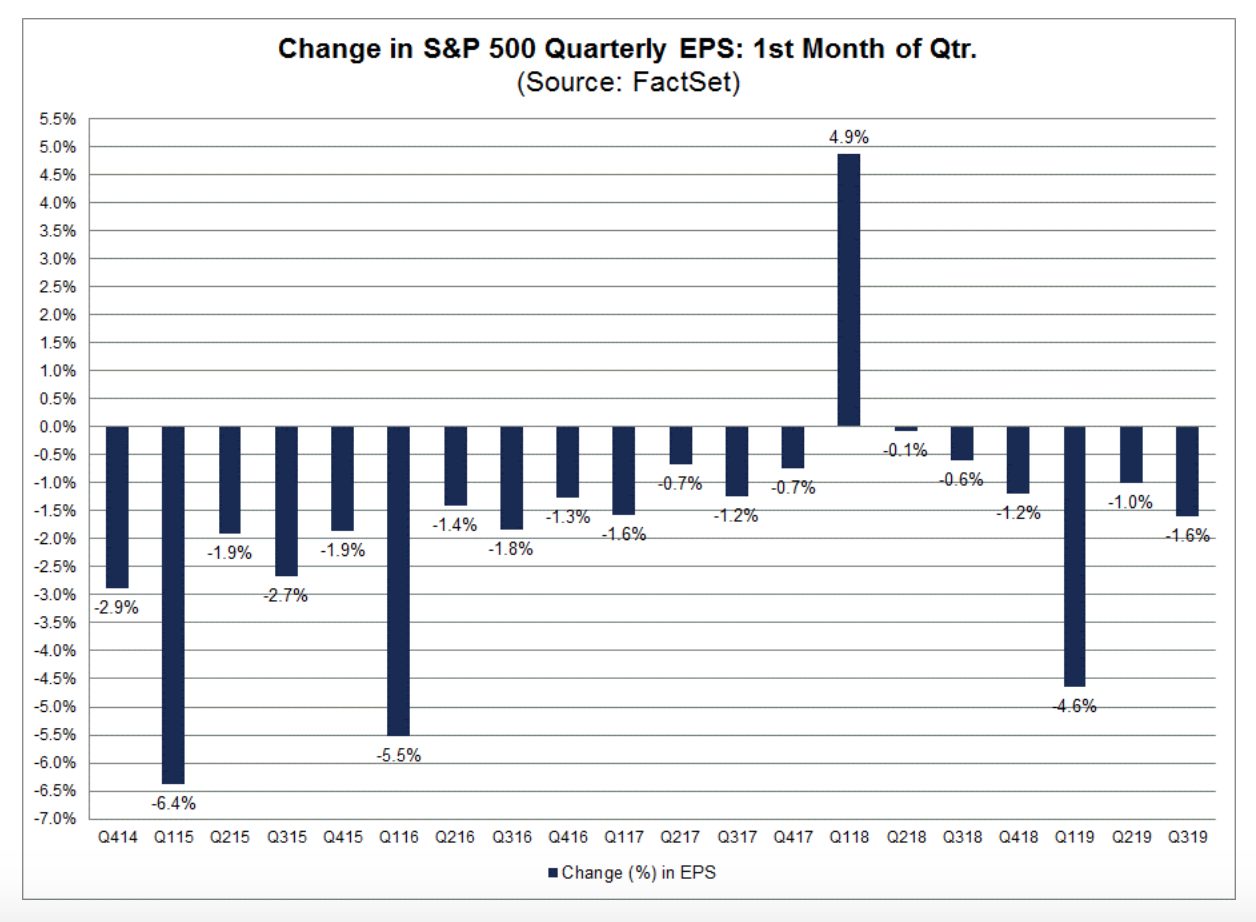 What’s hurting corporate earnings? The stimulus from the 2017 tax cut is wearing off, just as the deleterious effects of tariffs kick in. The trade war is dampening global growth and undermining business confidence.

The International Monetary Fund recently cut its outlook for global growth to 3.3%, the lowest since the 2008-2009 financial crisis.

And yet, stock valuations remain high. This disconnect can’t last forever. As the White House and China throw sand into the global trade gears, export-dependent companies with greater overseas exposure are positioned to experience the worst pressure on earnings.

According to Strategas Research, the utilities and real estate sectors generate a paltry 3.1% and 14.1% respectively of their revenues from foreign sources, whereas the technology sector derives a considerably higher 57.8% of revenues from foreign markets. For many mega-cap Silicon Valley companies, China is hugely important as a consumer market and source of components.

Re-balance your holdings toward U.S.-based small cap stocks, utilities, and real estate. These sectors tend to do well during the late stage of an economic recovery and they also don’t suffer from overseas exposure and trade war damage because their sales tend to derive domestically.

Consider taking profits from your biggest growth stock gainers; maintain exposure to precious metals (gold and/or silver) as part of your hedges; elevate cash levels; and use “stop loss” orders. These steps seem basic, but even experienced investors often forget them.

Editor’s Note: I’ve just answered a few questions from Jim Pearce, but there’s another colleague you should get to know: Jim Fink.

Our team has put together a new presentation to explain how it works. Click here to watch.