2 Ways to Profit from Retail’s Resurgence

In early May, I recommended focusing on the Consumer Discretionary sector for “Finding Value in a Pricey Stock Market.” I specifically referenced Target (NYSE: TGT), then trading near $75, as an example of the type of retailer that “can consistently grow earnings at a rate that exceeds the overly pessimistic earnings forecasts that Wall Street analysts predict for them.” 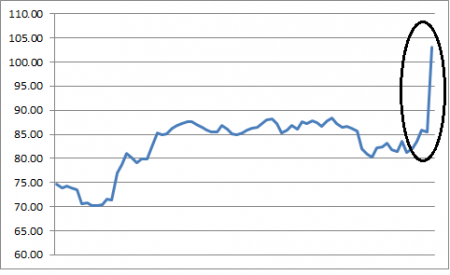 Last week, TGT jumped 20% to close at $103 after the company released its Q2 results. Target recorded a 22% rise in adjusted earnings per share (EPS) to $1.82, its highest level ever. In addition, its comparable digital channel sales increased by 34%. To top it off, the company increased its EPS guidance for the year by 15 cents.

The next day, several major investment banking firms raised their 12-month price estimates on Target to as high as $120. I hope that proves correct. I hold Target in the Personal Finance Growth Portfolio and own it in my personal investment account.

However, I am hesitant to recommend buying any stock after it has appreciated 50% in less than four months. So much optimism is currently priced into Target that any bad news could send it into a tailspin.

Instead, I prefer to take my profit from Target and reinvest it in other undervalued stocks. In the same article referenced above, I also cited Best Buy (NYSE: BBY) and Dollar General (NYSE: DG) as undervalued retailers due to Amazon.com’s (NSDQ: AMZN) outsized influence on the industry.

Both companies are scheduled to release their next set of quarterly results on August 29. If either one surprises the market the way Target did, we could see a big move in their share prices, too.

I added Best Buy to the Personal Finance Growth Portfolio four years ago when it was priced near $41. At that time, Wall Street considered Best Buy to be Amazon road kill.

However, the company quickly retooled its product lineup. Shortly thereafter, Best Buy released a string of strong quarterly results. That drove its share price above $80 by last summer.

Since then, BBY has gradually backtracked to $70. Investors are concerned that import tariffs on Chinese goods will impede earnings. That is understandable, but as Target just proved there are ways around any problem. Best Buy’s Q2 results may catch the market by surprise.

Likewise, Dollar General is dogged by worries about its dependence on imported goods. Its share price is down slightly since President Trump threatened more trade tariffs against China last month.

Similar to Target and Best Buy, Dollar General’s management team is not sitting on its hands. The company announced a new pricing structure to include items selling for up to $5. If that initiative is successful with its loyal clientele, DG could also jump up the charts next week.

Some of that upside potential has already been realized thanks to the strong quarterly results posted by Target and Home Depot (NYSE: HD) last week. Both BBY and DG ticked up a few dollars as the entire retail sector garnered newfound affection.

In percentage terms, those gains are minuscule compared to what might happen if either company reports unexpectedly strong results. From a technical perspective, Best Buy is positioned for a stronger rebound since it is trading below its 50-day moving average and is $10 below its upper Bollinger Band (DG is trading above its 50-day moving average and at the top of its upper Bollinger Band).

Speculators with a high tolerance for risk may consider buying a call option on BBY that expires on August 30 (the day after the company releases its Q2 results). Last week, while BBY was trading near $68, the $66 strike price could be bought for $4.50.

Of course, there is no assurance that BBY will rise at all after releasing its results. In that case, this option would have little value and produce a negative return on investment.

However, there is a way to make money on BBY even if its share price doesn’t move at all. Instead of buying a call option on Best Buy, sell a “naked put” on it.

Last week, while BBY was trading near $68, the $66 put option expiring on August 30 could be sold for $1.90. That works out to a 2.8% yield over just a few days and is your money to keep no matter which direction BBY goes.

If BBY drops below $66 before the option expires, you’ll have to buy it at that price. But remember, you collected nearly $2 for taking that risk so your breakeven price on this trade is $64.10.

If that idea appeals to you, you should take a look at what my colleague Amber Hestla has been up to lately. During the past year, she made 49 such trades that all generated immediate income for her grateful followers.

As chief investment strategist of Income Trader, Amber specializes in making big gains with reduced risk. If you can answer yes to three simple questions from Amber, you could start collecting $565.00 (or more) every week for the rest of your life. Want to get started? Click here to see if you qualify.