This prolonged bout of market volatility is brought to you courtesy of Twitter.

As JPMorgan analysts explained in announcing the index:

“Trade and monetary policy have become an increasing focus for the executive branch … via this carefully scrutinized social media platform. In response, a broad swath of assets from single-name stocks to macro products have found their price dynamics increasingly beholden to a handful of tweets from the commander-in-chief.”

The bank said its findings allow it to “construct statistical aggregates — a Twitter-vol index — with which to monitor and quantify shifts in the market environment.”

Since his surprise election in 2016, Trump has on average posted more than 10 tweets a day to his nearly 64 million followers. JPMorgan’s Volfefe index tracks and precisely explains Trump’s ability to move markets through his steady stream of daily tweets.

In a separate study released last week, Bank of America (NYSE: BAC) found that the stock market tends to sharply fall when the president is tweeting a lot.

Trump’s power to move markets up or down by virtue of tweeting also has raised concerns in the media and Congress about potential market manipulation and insider trading.

JPMorgan has confirmed what even casual market observers already know: President Trump has repeatedly demonstrated his ability to wipe out trillions of dollars in stock market valuation, in 280 characters or less (that’s Twitter’s limit per tweet).

We’re living in a world where a few keystrokes on social media can torpedo the stock market. When I was attending Boston University in the 1970s, they didn’t teach about that risk in my finance classes.

The per barrel prices of U.S. benchmark West Texas Intermediate (WTI) and international benchmark Brent North Sea crude have gyrated over the past 12 months. Take a look at the following chart, compiled with data from the U.S. Energy Information Administration (as of Monday’s close). 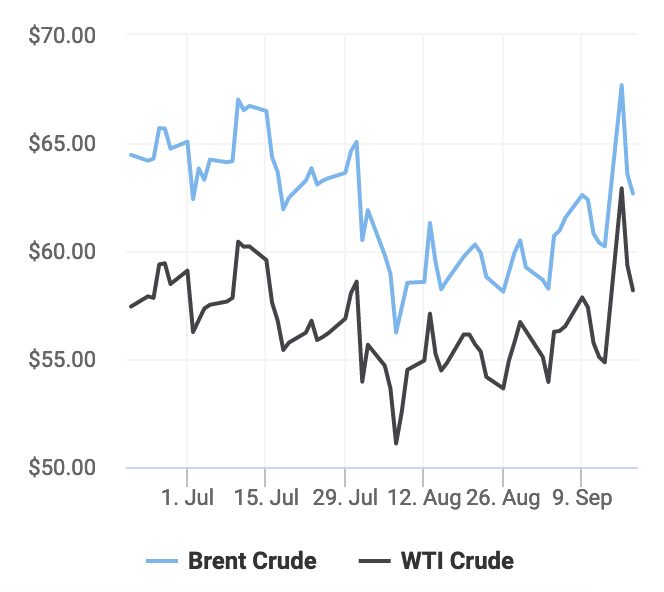 Oil prices closed higher yesterday, as a leadership reshuffle at the Saudi Energy Ministry fed expectations that oil production cuts would be expanded. The news followed reassurances from ministry officials that the much-anticipated Aramco initial public offering was still on track for the early 2020s.

Energy sector volatility has been accelerated by tweets regarding the White House’s shifting stance toward the Saudis and other major oil producers such as Iran and Venezuela.

You are hereby ordered…

We got a strong taste of Twitter-induced volatility on Friday, August 23, when Trump fired off a series of incendiary tweets, in which he stated:

“Our great American companies are hereby ordered to immediately start looking for an alternative to China, including bringing our companies HOME and making your products in the USA.”

Trump also used twitter that day to attack Federal Reserve Chair Jerome Powell as the “enemy” for not aggressively cutting rates and compared his hand-picked Fed chair to China’s leader Xi Jinping. By the closing bell Friday, the Dow Jones Industrial Average had lost more than 620 points. Earlier in the trading session the Dow had been in the green, but the index abruptly reversed course when Trump started tweeting.

Trump’s tweets have fueled volatility not just for the broader markets, but for individual stocks.

To cite just one of many examples: In December 2016, Trump sent the shares of Lockheed Martin (NYSE: LMT), the world’s largest defense contractor, plummeting when he tweeted that the “tremendous cost and cost overruns” of Lockheed Martin’s F-35 program led him to ask Boeing (NYSE: BA) to “price-out a comparable F-18 Super Hornet.”

Throughout Trump’s tenure, the same dynamic has befallen the stocks of several other blue-chip companies, in a wide range of industries. You probably hold some of these stocks in your portfolio.

Sure, these tweet-afflicted stocks usually recover. But analysts have raised the alarm that ill-advised tweets could trigger a financial contagion. The danger is further heightened by the increasing prevalence of algorithmic trading.

The bull market still lives, but it’s increasingly vulnerable. We’re witnessing a global asset bubble and the longer it goes on, the more susceptible it becomes to unexpected external shocks.

Research firm Capital Economics asserts that the convergence in August of three worrisome trends — the inverted yield curve, disappointing payrolls data, and an unexpected slump in manufacturing — boosts the odds of recession. Bear markets are often associated with a recession.

When markets are moving up or down not on the basis of fundamentals but because of impulsive assertions on Twitter, it’s time to take out some insurance on your portfolio. Consider implementing these proactive steps:

1) Pare your exposure to momentum stocks and transition toward value. Focus on stocks that perform well during the late stage of a recovery, notably utilities, consumer staples and health services.

2) Elevate your cash portion (15% is a reasonable level). Avoid the mega-cap, overvalued “story stocks,” especially in the technology sector, that get hyped on financial television.

4) Reduce your exposure to export-dependent industrial, manufacturing and technology stocks. These equities are most affected by the trade war and they get buffeted the worst by the president’s tweets. Now’s a good time to pocket at least partial profits from your biggest winners in these sectors.

5) Increase your exposure to conventional safe haven hedges, such as gold. The price of the yellow metal has enjoyed a big run-up this year but probably has further to run.

A crash can set back retirement plans by many years — and to make up the loss, Twitter won’t help you.

Got questions or comments about the nexus of Wall Street and social media? Let’s hear them: mailbag@investingdaily.com