How You Can Beat the Market at its Own Game

Two months ago, I offered “2 Ways to Profit from Retail’s Resurgence” using home electronics retailer Best Buy (NYSE: BBY) as an example. I suggested using options to profit from any short term move in Best Buy’s share price after it released Q2 results the following week.

Below, I’ll explain how you will have the opportunity to execute a similar money-making move this week. But first, a quick review of how this trading strategy works.

I closed that article by stating that “the safer bet” was to sell short a put option on Best Buy. That way, even if the stock didn’t move at all you would still make money.

Turns out, Best Buy’s Q2 results disappointed the market. That news pushed its share price down 8% on August 30. If you had followed my advice, you would own BBY at the put option’s strike price of $66 even though it was trading closer to $63 that day.

At that point, you may not have been very happy with me. The $2 options premium you would have received was less than the $3 loss in Best Buy’s share price.

However, it did not take long for the merit of this trading strategy to become apparent. Over the past six weeks, BBY has slowly rallied back above the $68 level where it was when I suggested this trade in the first place. 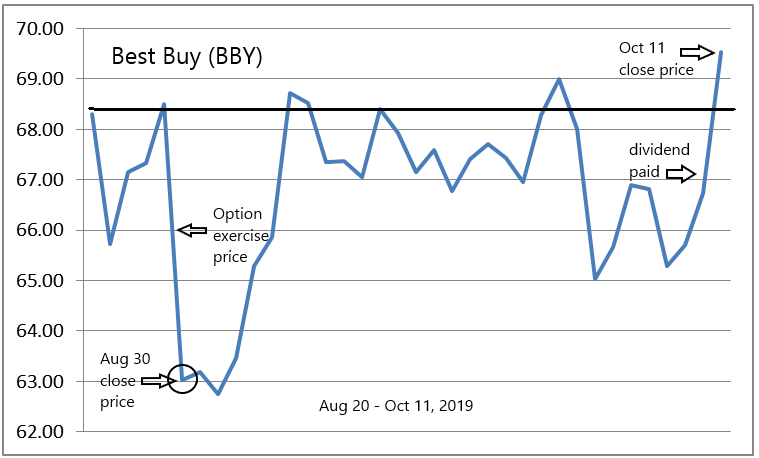 That means the stock that you would have bought at a $3 loss is now showing better than a $3 gain. Also, Best Buy paid out a cash dividend of 50 cents on October 10. That’s in addition to the options premium received when the contract was first written.

When you add it all up, the total return on this trade works out to roughly 9% as of the end of last week. And that’s over a seven-week span, which equates to a 62% return on an annualized basis.

Think about that for a minute. This trade more than tripled the 2.4 % gain in the S&P 500 even though the underlying stock’s share price did worse than the index!

That type of result is possible due to two things: stock market volatility and the inherent leverage of options.

It doesn’t make much sense to buy (or sell short) a stock if you think it will make a big move in only a few days or weeks. In that case, buying a call option (or selling short a put option) would be much more profitable.

Over the next couple of weeks, hundreds of companies will be releasing quarterly results. You can bet many of them will move strongly one way or the other depending on the extent to which those figures exceed or fall short of expectations.

Here is a short list of notable companies scheduled to release their quarterly results this week:

Each one of these companies is a current holding in either the Personal Finance Growth or Income portfolio. That means we believe their share prices are likely to outperform the overall market.

Of those five, the one that intrigues me the most is Western Digital. Its share price has been all over the place during the past two years, from above $100 eighteen months ago to below $40 as recently as last June.

For the past month, WDC has been vacillating around $60. At that price, the stock is valued at only nine times forward earnings and just one times sales.

Both of those metrics are roughly 10% less than Western Digital’s longtime rival, Seagate Technology (NSDQ: STX). If Western Digital surprises the market this week with good news, its share price could quickly jump up to the $65 level where it was trading last month.

If that happens, the $58 call option that could be bought for $3 last week would gain more than 100%. In this case, I don’t recommend selling a put option on WDC since the premium isn’t enough to justify the risk.

Of course, if Western Digital disappoints the market this week as Best Buy did two months ago, this option could expire worthless. That’s the downside to trading options, so only seasoned investors should engage in that type of activity.

If you’re looking for a safer way to reap big gains, turn to my colleague Amber Hestla.

Amber is a Wall Street veteran. She’s also a military veteran who served in Operation Iraqi Freedom. While deployed overseas with military intelligence, Amber learned how to interpret disparate data to predict likely outcomes. Upon her return to civilian life, she honed this skill to find money-making opportunities.

She now lives as a Wyoming rancher, raising two children and applying her military intelligence skills to picking investments. She bought her 80-acre ranch with cash…from just five minutes of “work” each day as a trader.

Over the past year, Amber placed 49 trades…and racked up 49 winners. Want to know how Amber does it? Click here to learn her secrets.