During the fracking revolution of the past decade, vast riches quickly and unexpectedly rained on the wildcatters of the American shale fields. As the TV theme song goes: Next thing you know, Old Jed’s a millionaire.

But now the Great American Shale Boom appears to be losing steam, with profound consequences for the broader economy and financial markets. Even if you’re not an energy investor, here’s why you should care.

First, a quick primer. Previously unavailable oil deposits are now cheaper and easier to extract, thanks to hydraulic fracturing (“fracking”) and horizontal drilling. Fracking is a technique whereby pressurized liquid, primarily water and sand, is injected into a wellbore to fracture rock. Sand and other “proppants” hold the fractures open to create cracks in the deep-rock formations through which petroleum and natural gas can flow more freely.

Precursors to fracking have been around since the 19th century but the practice took off on a massive, commercial scale in the mid-1990s with the advent of new and more efficient techniques. The spread of fracking exponentially boosted U.S. energy production, making chumps of the pundits who warned about “Peak Oil.” It also tossed a curve ball to the House of Saud.

The Saudis launched an oil price war in 2014. By throwing open the spigots, they drove down the price of oil. Their goal was to bankrupt U.S. shale producers. To the keffiyeh-wearing sheikhs of this desert kingdom, it must have seemed like a good idea at the time. But the Saudi plan backfired…badly.

The fracking technology devised by U.S. engineers has been so ingenious, domestic producers have been able to pump oil at extremely low cost, much lower than OPEC’s cost of production. Good ol’ American know-how showed the Saudis who was boss.

Because of fracking, the United States has surpassed Saudi Arabia to become the world’s largest crude oil producer. However, over the long haul, the net effect has left global markets sloshing with an excess of cheap crude, which in turn weighs on oil prices. That hurts the top and bottom lines of indebted energy companies.

From the Eagle Ford in Texas to the Bakken of central North America to the Permian of the Southwest, the losers in the U.S. shale fields have been those firms that racked up the most debt to expand too aggressively.

U.S. oil production growth has significantly declined in recent months, as stubbornly low prices and rising barriers to capital markets have compelled a pullback in drilling. 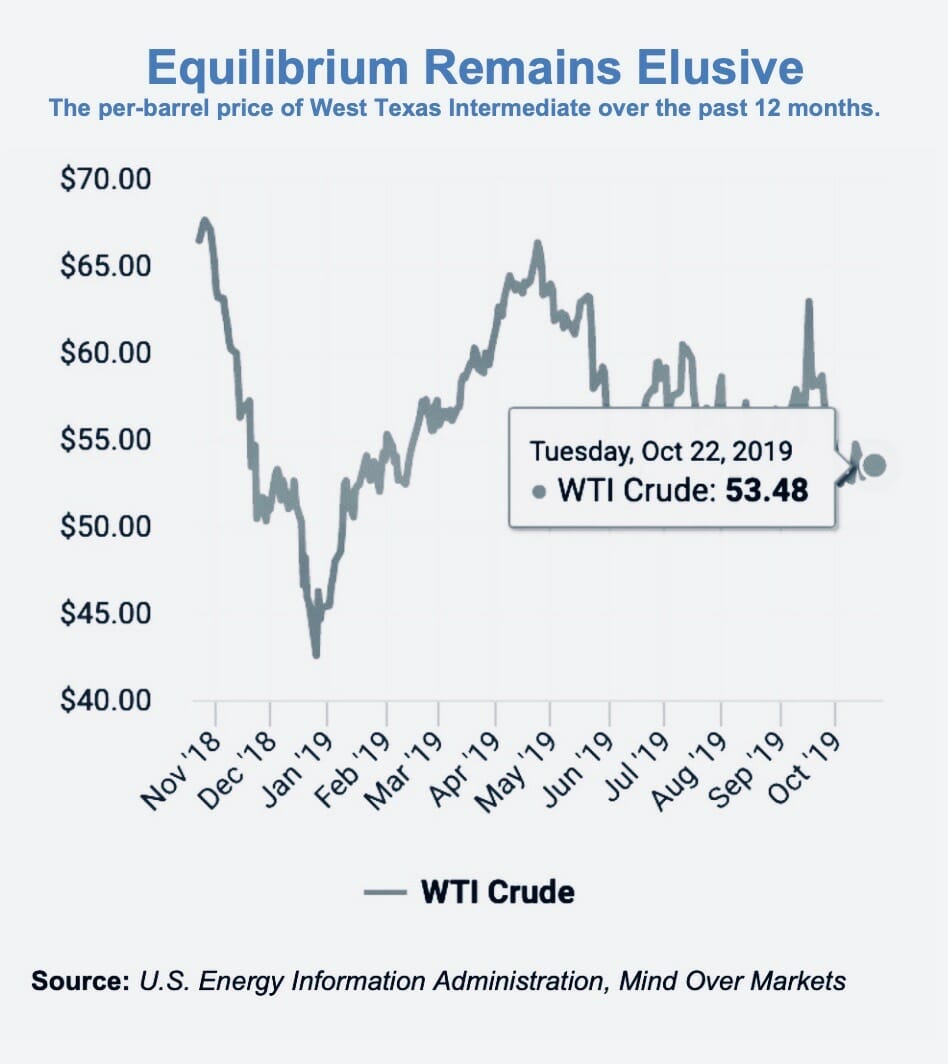 As the shale oil business gets unprofitable, the energy sector is cutting jobs, a trend that reverberates throughout the economy. Oilfield services giant Halliburton (NYSE: HAL) this month eliminated 650 workers. In September, shale gas leader EQT (NYSE: EQT) reduced its workforce by more than a fifth. Fewer workers and fewer rigs translates into lower production.

Now that prices are on the downward slope again, balance sheets in the shale industry are loaded with debt but margins are shrinking. It’s the familiar boom-bust cycle and when oil goes bust, the broader stock market often suffers collateral damage.

Read This Story: Climbing the Wall of Worry…Brick by Brick

Wall Street interprets rising oil prices as a sign of economic vitality, and rightfully so. Oil is the most valuable commodity in the world and it powers modern industry. When the energy sector enters a bear market, it tends to drag the economy and financial markets down with it.

To be sure, lower energy prices benefit consumers and temporarily help companies that rely on oil inputs. But if energy prices get too low, it signals decreased demand and a slowing economy, which in turn spooks investors.

“A marked slowdown in the US shale patch since the start of the year has led us to lower our expectations slightly for US crude production for 2019 and 2020. Despite many new pipeline projects coming on-line during 2H19, operators continue to lay off rigs and instead prioritise investor returns.”

In its report, Paris-based IEA pointed out that U.S. oil production only grew by 140,000 barrels per day (BPD) between January and July, a meager increase when compared to the 740,000 BPD added by U.S. drillers during the same year-ago period.

The IEA went on to explain:

“Pure-play shale producers and independents had already flagged a 6% decline in upstream spending this year in their initial 2019 guidance. Operators shed another 29 rigs during September so that by end-month, there were 172 fewer active rigs than at end-2018. The frac spread count has declined 23% since March, to a 2.5-year low.”

The supply glut that’s weighing on prices will only get worse in 2020, as global economic growth slows. OPEC and its ally Russia may further slash production, but with a recession looming and China’s economy sputtering, agreements to curtail production may not be enough to offset slumping demand.

With financial pressures bedeviling the balance sheets of U.S. shale companies, many are trying to drill their way out of their dilemma. Others are trying to boost margins by slashing costs and enhancing drilling efficiency. These desperate efforts can only go so far.

OPEC and its partners this year agreed to slash crude output by 1.2 million BDP. The reduction has been deepened by a recent series of geopolitical crises, ranging from sanctions against Iran to a drone missile attack on Saudi Arabia’s oil processing infrastructure. Regardless, the global glut is adding pressure on OPEC to further curtail production when the cartel meets on December 5-6.

These supply-and-demand imbalances will continue for many months. Over the long term, energy demand is likely to grow robust again and push up prices, especially as middle class consumers become more prevalent in developing countries. But trying to time the energy market is a fool’s game.

As an investor, you should consider less volatile sectors that are immune from overseas shocks, such as real estate, utilities and health care. Another shrewd move now is to invest in technological innovations with multi-year momentum that are recession-resistant. One such investment theme is the worldwide implementation of 5G wireless technology. For details on how to play 5G for market-beating gains, click here.

Another compelling theme is marijuana legalization and commercialization, a “green rush” that represents the investment opportunity of a lifetime. To learn the details of the best marijuana plays now, click here for a free report.