Over a Barrel: Oil’s Sway On The Stock Market

“Do you know the only thing that gives me pleasure? It’s to see my dividends coming in.” — John D. Rockefeller

Those dividends certainly came pouring in. By the time he died in 1937, oil baron John D. Rockefeller had amassed a fortune that in today’s dollars would be worth roughly $340 billion. He holds the record as the richest American…ever.

How did Rockefeller reach the pinnacle of capitalist success? In 1870 he founded Standard Oil, the oil producing, transporting, refining, and marketing company that monopolized the industry and ushered in the Hydrocarbon Age.

Fossil fuels still hold the key to vast wealth. Below, I’ll explain why current volatility in the energy patch matters to investors of all types.

I’ll also steer you toward a different industry, now on the cusp of greatness just as oil was in the late 19th century. This fledgling industry has the power to mint new millionaires.

Lower oil prices help consumers and certain businesses by reducing their costs. However, if crude sinks too low, it clobbers the energy sector with collateral damage spilling into the broader stock market.

The stock market and oil prices often move in tandem because Wall Street views energy demand as a barometer of economic health. Robust oil prices are interpreted as signs of vitality in the overall economy; the converse is true.

In recent weeks, though, stocks and oil have decoupled. Stocks have hit new highs while energy prices have stumbled. The reason is a worsening global oil glut.

This latest addition to the global oil glut contributes to a streak of six weekly inventory increases over the past seven weeks, with only one weekly decline.

Meanwhile, the Organization of Petroleum Exporting Countries (OPEC), which pumps about a third of the world’s oil, recently warned that global oil demand is sputtering.

The cartel projected in its new World Oil Outlook that demand for its own crude over the next two years would substantially diminish. OPEC cited as reasons slowing global economic growth, rising non-OPEC production, greater use of renewables, and increasing action around the world on climate change.

A headache for the Saudis…

Even as OPEC and its ally Russia try to curtail production, soaring production is on tap from Brazil, Canada, Norway and Guyana, four oil producers that usually operate on the sidelines with modest production levels compared to OPEC. New oilfield discoveries, combined with relative political stability, have brought these producers to center stage.

The four countries in aggregate are expected to contribute about a million barrels per day (BPD) to the market in 2020 and a million more in 2021, in addition to the current world crude output of 80 million BPD.

This growing glut of oil is complicating plans for Aramco, Saudi Arabia’s huge oil producer, to launch what’s expected to be the world’s largest initial public offering (IPO) in history.

The glut is expected to weigh on oil prices into the foreseeable future, which alarms Saudi oil ministers because it would diminish the appeal of the IPO. Accordingly, Saudi Arabia has accelerated its timetable for the IPO and now plans for December 11 as the date of its domestic listing.

As the following 12-month chart shows, the per-barrel prices of U.S. benchmark West Texas Intermediate (WTI) and the international benchmark Brent North Sea crude have struggled so far this year (prices as of market close Wednesday). 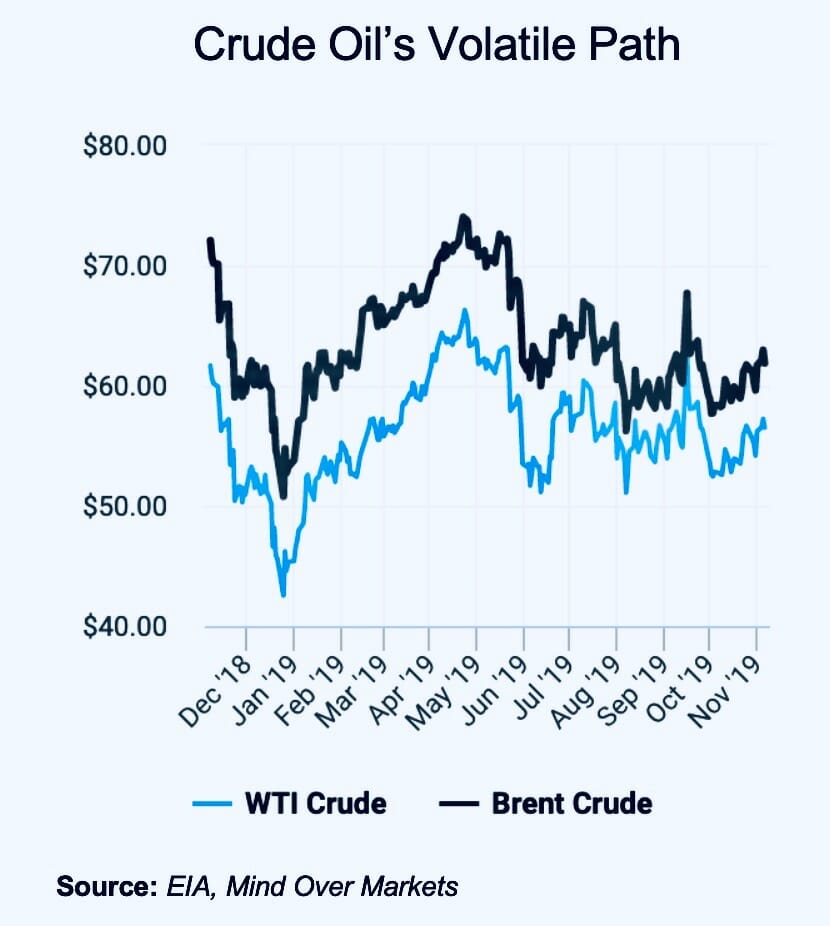 As oil prices struggle for traction, the downward trend is clobbering energy company profits. According to research firm FactSet, expectations for earnings growth amid all S&P 500 companies for Q4 2019 have been falling in recent weeks. As of November 1, the projected earnings decline was -0.4%.

Five of the 11 sectors are now projected to report a year-over-year decrease in earnings for the fourth quarter, led by the energy sector at -29.7%.

The U.S. is the world’s top producer of petroleum and natural gas. For our country’s status as number one, we have the shale revolution to thank.

However, booming shale production has become too much of a good thing. North American shale producers are currently struggling with declining earnings and debt-ridden balance sheets, as overproduction takes its toll on financial operating results.

Predictions for the future price of oil are all over the map, but generally speaking, bearish sentiment is on the rise. Trying to forecast global oil prices is really a matter of trying to forecast the future trajectory of national and regional economies. And therein lies hope for energy investors.

Over the long haul, energy demand and per-barrel prices should regain altitude because of the rise of middle-classes in emerging markets.

Asia stands out. Vietnam, Taiwan, South Korea, Indonesia and other countries usually ignored by the mainstream media all boast growing, increasingly educated and computer-literate middle classes. More and more of these consumers are flexing their newfound affluence by purchasing automobiles and other energy-guzzling products. The same phenomenon is occurring across Latin America and Africa.

Throughout these countries, leaders are plowing considerable sums into infrastructure spending and pursuing policies designed to shift their economies from a heavy dependence on exports toward domestic demand. Future energy demand is getting baked into the cake.

Beaten-down and undervalued energy plays are poised to benefit down the road from greater oil demand. But you need to have a strong stomach and the ability to withstand volatility along the way.

The refining industry looks particularly appealing now. Refiners tend to do well when oil prices are falling, as we’re seeing now. Low input prices and the growth of the export market are boosting the margins of the major U.S.-based refiners. These refiners also benefit from easy access to Gulf Coast export capacity.

So don’t let the energy sector’s volatility scare you away. Every portfolio should have exposure to the industry that made John D. Rockefeller the world’s first billionaire and the richest person in modern history.

Editor’s Note: Congrats if you’re making nice profits from this long-running bull market. But many analysts are calling for a correction to hit soon. We’re also seeing signs that a recession is around the corner. You need to get prepared.

If you’re looking for an unstoppable investment trend with global tailwinds, look to the marijuana industry. As marijuana Prohibition ends, early investors in the right pot stocks are getting rich.

In the United States, Canada, Europe, and around the world, federal and local governments are legalizing cannabis, fueling a “green rush” in lucrative investment opportunities.

Pot stocks are largely immune to the ups and downs of crude oil prices or the uncertainties of trade war.

Billionaire investors are making big bets on marijuana. Who will emerge as the “Rockefeller” of pot? For the best-of-breed marijuana plays, click here for our latest report.

John Persinos is the managing editor of Investing Daily. He also serves as editor-in-chief of Marijuana Investing Daily. Comments or questions? Send John an email: mailbag@investingdaily.com