A few days ago, I explained how some investors try to profit from trading on illegal insider information. Unless you enjoy prison, we strongly discourage you from ever engaging in that type of activity.

Today, I’m will show you another way to profit from corporate information that is open to the public. This type of trading is perfectly legal and only requires a little common sense and a lot of guts.

To illustrate, consider last week’s trading activity in NV5 Global Systems (NSDQ: NVEE). If you are unfamiliar with NV5, that’s understandable. NV5 is a small engineering company based in Florida. It has a market cap (stock market value) of less than $700 million. So, it doesn’t get much attention from Wall Street.

Until a few days ago, NV5 had a market cap of better than $900 million. That is, until the company released Q3 results on November 7 that included a critical misstatement.

By then, it was too late. Within minutes of the initial report, the computer algorithms that make stock trades based on raw data had already issued sell orders for NVEE. 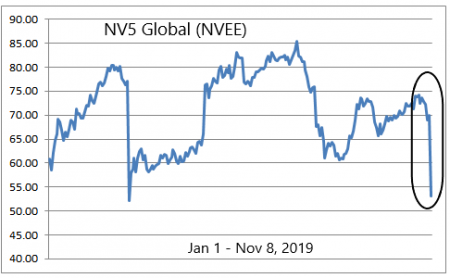 The predictable result was an imbalance of bid and ask orders, pushing NVEE down more than 20%. The following day, additional sell orders were issued by other trading programs based on NVEE’s technical breakdown the night before.

In less than 24 hours, NV5 had lost 24% of its value. All of that due, apparently, to nothing more than an erroneous data point that was quickly corrected.

That being the case, surely there must be a way to make some easy money off of this situation, right? After all, the company reported a 26% increase in gross revenue during the third quarter. Usually, that type of performance will send a stock skyrocketing.

However, there is a complicating factor. At the same time NV5 released its Q3 results, it also announced a $300 million acquisition.

In fact, it was this transaction that led to the erroneous guidance issued for next year. NV5 failed to properly account for depreciation related to this purchase and overstated the cost of the debt used to finance it.

Some analysts may have concerns regarding how a transaction of this size might impact NV5’s future performance. However, if that were the case, they would have needed some time to do the math and then issue a report.

The fact that so many sell orders were executed within minutes of the initial press release strongly suggests that no such critical thinking ever took place. At the very least, an analyst familiar with NV5 would have suspected something was amiss and contacted the company for clarification.

Ironically, NV5 has a stellar track record of acquiring businesses that are immediately accretive to their operating results. In every case when the company had to issue more stock to finance a purchase, it has been able to grow its EPS at a greater rate than the dilution to the stock.

If anything, the news of this pending transaction should have been welcomed by the market. That didn’t happen. Instead, a computer algorithm saw a number that was substantially less than what was expected and freaked out.

If this incident had been a simple case of program trading run amok, by the following day the stock should have quickly reverted to its previous value. That didn’t happen. And it didn’t happen the day after that, either.

The fact that NVEE did not recover right away suggests whoever sold the stock has no interest in buying it back, even if it were done in error. At the moment, the “smart money” on Wall Street is either unaware or unconvinced of NV5’s inherent value.

At this point, we must transition from using common sense to trusting our gut. I have been following NVEE closely for the past two years, ever since I bought it in my own account. Each time it dropped, it has rallied strongly after issuing its next quarterly report.

Now, I’m back to breakeven on that trade. Not much I can do about that position except wait for NV5 to issue its Q4 results in another three months. At that time, I expect the stock to rally strongly.

This option expires in only six weeks. If NVEE doesn’t rally in a hurry, I may not make any money on this trade. In fact, if NVEE remains below $55, I could lose my entire investment.

I don’t mind taking that type of risk, but you might. In that case, if you want big profits that are safer, turn to my colleague Jim Fink.

Jim Fink is chief investment strategist of Options for Income, Velocity Trader, and Jim Fink’s Inner Circle. Jim has quite a story to tell. They laughed when he left his cushy, lucrative job to support himself through investing. No one is laughing now.

After toiling 90 hours every week at a high-pressure law firm, Jim decided to quit the rat race. Applying his knowledge of Wall Street, he went to work creating a powerful, predictive trading system. Instead of making law partner, Jim made a fortune.

Now, he’s showing a select group of investors his “crazy” system that so far this year has spit out winning trades 100% of the time. Want in? Click here for details.