Whether it’s to make banking easier for “ganja-preneurs,” or to legalize pot on the national level, the legal and regulatory tailwinds in the United States are accelerating for the marijuana sector.

Now that the U.S. House of Representatives is under Democratic control, an increasing number of bills are getting introduced in Congress that favor canna-business. The mainstreaming of Mary Jane represents an unstoppable trend, spawning an investor frenzy.

I especially like the “pick-and-shovel” plays on the marijuana boom. These companies aren’t necessarily about growing marijuana nor are they developing cannabis-derived drugs. They’re infrastructure stocks that can be wildly profitable.

Marijuana investing remains risky, but you can seek greater safety (and profits) by focusing on the ancillary firms that provide infrastructure services for growing pot companies in either the recreational or medicinal segments.

Problem is, many of these pick-and-shovel plays are penny stocks with low floats, low volume, and next to no revenue. They’re on the radar now largely because the yakking pundits on financial news channels are obsessed with the cannabis sector. Marijuana investing is a sexy topic that boosts ratings.

As often happens when a disruptive industry is booming, we’re seeing a proliferation of marijuana penny stocks. Some of these stocks are appealing plays, but many others are hyped-up scams that prey on the gullible.

Among marijuana infrastructure companies, some of the more promising firms deploy controlled environment agriculture systems that are designed to use as little land, water and energy as possible. They market themselves as “eco-friendly” as well as more cost-effective.

These companies have designed vertical farming solutions that use the latest pot growing techniques, including hydroponics and specialized lighting products.

The firms in this sub-sector develop, market and sell (both retail and wholesale) indoor and outdoor garden systems. They use proprietary seed kits to grow flowers and vegetables, targeting both experienced and amateur gardeners. They supplement their product lines by selling support accessories, such as LED lights.

Other types of pick-and-shovel plays focus on end-user products in industrial processing, such as products to prevent drilling leaks in oil and gas operations; lubricating agents to prevent machinery parts from sticking; and absorbents for emergency spills of toxic materials. Some of these companies create their products by using the versatile organic properties of the hemp plant.

Make no mistake, many of these pick-and-shovel plays are risky penny stocks. The trick is to weigh the risks with potential rewards and see if the equation spells “buy.”

Look for low debt, growing earnings, proven products, and a solid balance sheet. But you also need to look beyond the financials and at the inherent qualities of the company’s products. You must determine whether the company does anything special. Do its products and/or services solve a problem?

Lasting businesses solve problems; they distinguish themselves from competitors. They offer something unique and indispensable.

Growing marijuana, squeezing oil out of plants — more and more companies do that now. Marijuana is becoming a commoditized sector in which companies with the most capital and resources have the edge.

Never forget one fact: despite its mystique, marijuana is just a plant.

Not surprisingly, pot stocks have plummeted in recent months. The marijuana industry benchmark exchange-traded fund Horizons Marijuana Life Sciences Index ETF (HMMJ) year-to-date has fallen 31%, compared to a gain of 22.9% for the S&P 500 (see chart, as of market close Monday). 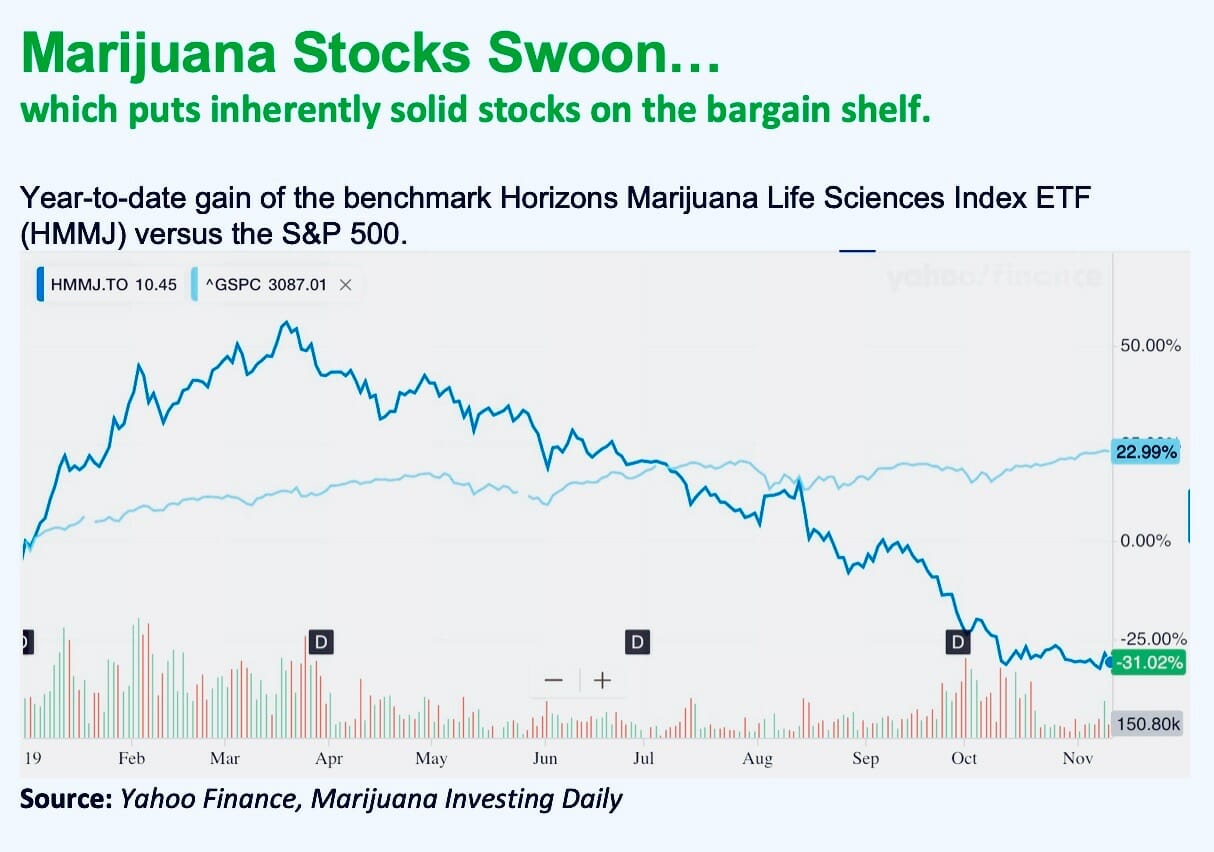 This general decline, though, means many appealing marijuana stocks are trading at bargain valuations.

You can find values in the marijuana sector, but more volatility may lie ahead. I go out of my way to warn my readers about risky pot penny stocks. I know it’s tempting to jump in at only pennies per share, thinking there’s limited risk, but some of these stock could go to zero.

There are cannabis companies that do make money and have capital, as well as a vision and management that can execute. But many marijuana penny stocks won’t exist as industry-wide consolidation takes hold.

Don’t get me wrong: you can still make huge profits in canna-business. But you must stick to quality and shun fundamentally weak companies.

The recent swoon in pot stocks could be bottoming out, or gathering steam. The pot industry is susceptible right now to the classic boom-bust cycle, reminiscent of the Dot.com bust of 2000-2002.

Remember back then, when Internet stocks were sizzling hot and money-losing companies were attracting scads of investor money? From 2000 peak to 2002 trough, most Internet stocks declined in value by 75% from their highs, wiping out nearly $1.8 trillion in value.

Let that sink in, as you survey your choices among marijuana investments. Pick-and-shovel plays are shrewd bets now, but pick your spots. Indiscriminate pot investors will get burned.