Teva Pharmaceutical: No Pain, No Gain

The past year has been rough for Teva Pharmaceutical Industries (NYSE: TEVA). After trading within a few pennies of $24 in November 2018, TEVA fell all the way below $7 eight months later. During the past month, its share price has gradually recovered. On November 5, it traded above $9 for the first time since July 12. 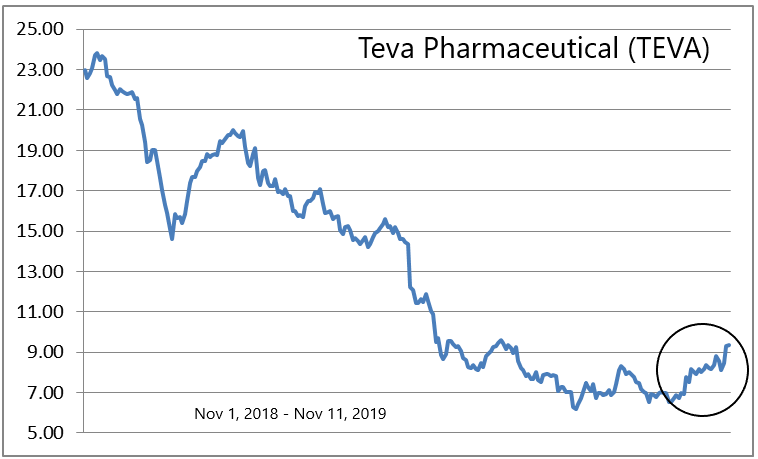 That is still a far cry from where it was at this time last year, but it’s a start. I believe there is a trading opportunity in TEVA that I’ll explain in a moment. But first, it’s important to understand why TEVA has taken such a pounding in the first place.

As its name implies, Teva Pharmaceutical is a drug manufacturer. Headquartered in Israel, it sells drugs all over the world. For several years, Teva’s bestselling product was a generic form of oxycodone made by its Actavis Pharma subsidiary.

From 2006 through 2012, 76 million opioid pills were sold in the U.S. Actavis was one the largest manufacturers of those pills, most of which were distributed through retail pharmacies such as Walgreens Boots Alliance (NSDQ: WBA).

Sadly, nearly 100,000 Americans have died so far from opioid addiction and abuse. Now, Teva Pharmaceutical and a handful of other drugmakers are paying the price for the damage done. Teva has been targeted by U.S. regulators for its role in the opioid crisis. It has been a defendant in numerous class-action lawsuits, many of which it has lost.

That’s why Teva and a handful of its co-defendants offered a “global” settlement with multiple plaintiffs last month valued at $48 billion. Teva’s share of that deal is nearly half, consisting of $250 million in cash and $23 billion in free opioid addiction treatments.

At first glance, the size of that deal might seem impossibly large for Teva to digest. After all, its market cap (total stock market value) of roughly $11 billion is less than half that amount.

But wait, there’s a catch. Teva is valuing the free drugs at its “WAC,” or wholesale acquisition cost. Industry experts estimate that Teva’s actual manufacturing cost for that drug to be only 10% of the WAC.

In addition, Teva is offering to pay out the $250 million in cash over the next 10 years. That works out to an average of $25 million annually, which Teva could easily pay out of cash flow. Over the past 12 months, Teva generated more than $17 billion in sales.

No wonder the stock market reacted so enthusiastically to this news. If everyone agrees to this deal, Teva Pharmaceutical may be on the road to recovery. However, not everyone is on board with Teva’s offer, at least not yet. Some of the plaintiffs feel it is too lenient and should be amended to include more cash up front.

In addition, the medical industry has become a focal point of the 2020 presidential election. Several Democratic candidates are promising some form of universal health care under a single-payer system administered by the federal government.

Even if Teva is able to negotiate a global settlement and put the opioid disaster behind it, it may not be out of the woods. Most industry experts agree that the first place the government would look to cut health care costs is drug prices.

For those reasons, the near-term outlook for Teva is cloudy at best. The next 12 months will determine Teva’s fate and there is simply no way to accurately predict how it will turn out.

Given all the uncertainty surrounding Teva, I do not recommend buying its stock. Its share price may stall out until next year’s presidential election is over. For the same reason, I do not suggest buying a call option on Teva, either.

However, there is a way to make money off Teva even if its share price doesn’t move at all. Even better, you don’t have to own its stock to cash in. In fact, you don’t have to buy anything at all. Instead, you could sell a put option on TEVA that will pay you a premium right now.

For example, a few days ago the put option that expires this January 17 at a strike price of $9 was selling for 72 cents. That money is yours to keep no matter what happens. There are two possible outcomes to this trade:

If TEVA remains above $9 then the option will expire worthless. The option premium you received works out to an 8% return on capital-at-risk over two months, or nearly 50% on an annualized basis.

If TEVA falls below $9 by expiration then you will have to buy it at that price. After subtracting the option premium you received, the breakeven share price would be $8.30.

I’d be willing to own Teva Pharmaceutical at that price. Teva’s Q3 results were messy due to costs associated with the opioid settlements but should be much cleaner next year. Its share price should start heading back up, at which point this trade would be profitable.

However, you may not be comfortable owning TEVA under any circumstances. In that case, my colleague Jim Fink has developed options trading strategies that are not only hugely profitable, but remarkably consistent…and simple to execute.

Our team has put together a presentation to explain how you can profit from paragon. Click here to watch.