Welcome to Cannabis Nation. In growing numbers of cities and towns across America, you can just walk through the door of a marijuana dispensary and casually buy pot, the way you can walk into a 7-Eleven to buy a can of soda.

If you had described this future world to me, back when I was a long-haired teenager in the 1970s, I would have laughed and asked what you were smoking.

Nonetheless, the “holy grail” of complete decriminalization throughout the country remains elusive. Increasing numbers of states and localities are loosening restrictions against pot, but the weed remains banned on the federal level and some states are reluctant to jump aboard the pro-marijuana bandwagon.

Many jurisdictions, especially in socially conservative red states, stubbornly cling to marijuana prohibition. The result has been a crazy quilt of laws pertaining to recreational and medical marijuana.

As an investor, you need to stay abreast of these legal developments. Changing laws directly affect the top and bottom lines of marijuana companies, depending on where they’re based and operate.

Let’s look at this week’s “news you can use” in cannabis.

Sen. Kamala Harris (D-Calif.) on Sunday said people convicted of felonies for selling marijuana should be given priority consideration for jobs in the legal marijuana industry.

Harris was a Democratic candidate for the 2020 presidential nomination. She dropped out Tuesday. Her campaign had been losing steam lately in a still-crowded field. In an apparent effort to appeal to the left of the political spectrum, she embraced marijuana legalization.

Harris also may have been trying to overcome any stigma from her background as a tough prosecutor. More than 2,000 people were jailed for marijuana offenses while she was California’s attorney general.

Harris stated that if you were busted in the past for illegally selling marijuana, you now have a directly relevant work skill in the booming legal marijuana sector. As she put it:

“I am a proponent of legal marijuana. And I’m also a proponent of saying, you know what, all those people who were arrested and are now felons for life, and now we’re looking at many states, including my home state, that has legalized marijuana and is now one of the biggest cash cow industries in America … let’s expunge their records and put them first in line to get the jobs in this new industry.”

Harris is no longer in the race, but she put a bold and lasting idea on the table. Most of the Democratic candidates running for president support marijuana legalization. Among the chief virtues they cite is the huge potential windfall in state taxes (see chart). 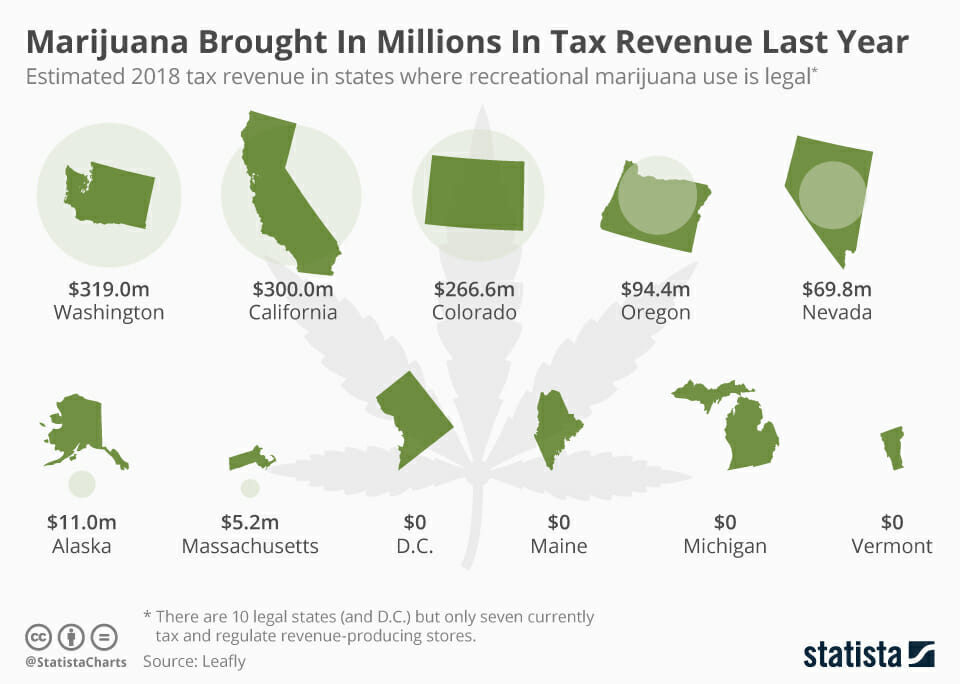 The U.S. Department of Agriculture (USDA) is paving the way for the dissemination of real-time hemp information to law enforcement authorities to facilitate interstate hemp shipments.

USDA is creating a data-sharing platform with the U.S. Department of Justice to help officials determine whether shipments are legal hemp or illegal marijuana. Hemp received a major tailwind with passage of the 2018 Farm Bill. Signed into law on December 20, 2018 by President Trump, the sweeping agricultural legislation essentially decriminalizes hemp.

The National Credit Union Administration (NCUA) Board, a federal agency, has determined that people with convictions for drug and marijuana possession should not be barred from working at credit unions, as long as they fall within certain parameters for low-level offenses.

Florida’s agriculture commissioner said she wants the state to be the “gold standard for the entire country” on hemp.

Through passage of a 2016 ballot initiative, Florida became the first Southern state to legalize medical marijuana. Recreational pot remains illegal in the state.

Virginia’s attorney general recently decried marijuana laws in Old Dominion. He stated that decriminalization is the first step the state should take, because it costs the state money dealing with marijuana convictions. Marijuana is strictly prohibited in Virginia in all forms.

The New Jersey Assembly Oversight, Reform and Federal Relations Committee has scheduled a hearing for next week on legislation to place a marijuana legalization referendum on the 2020 ballot.

Texas regulators are getting ready to submit proposed hemp regulations as soon as this week.

Ever since the landmark 2018 U.S. farm bill legalized hemp, the highly versatile plant (a low-THC cousin of marijuana) has gone mainstream in a rising number of states. Texas farmers are lobbying for state policies that expedite the adoption of hemp for industrial uses.

Questions or comments about the legal landscape for marijuana? Drop me a line: mailbag@investingdaily.com