Marijuana: The Laws Keep Getting Looser

President Trump’s impeachment Wednesday in the House of Representatives is dominating the political headlines, but the war between the Democrats and Republicans has not stopped bipartisan action on marijuana legalization.

There are now 1,369 cannabis-related bills moving through state legislatures and Congress for 2019 sessions. The two political parties may be fighting hammer and tong, but the normalization of pot goes on, at the federal and state levels.

Here’s my latest round-up of legal and regulatory actions that investors need to know.

In the U.S. House, top Republican lawmakers on the House Energy and Commerce Committee are pushing Democrats to schedule a hearing on improving marijuana research “as soon as possible.” They asserted in a letter:

“Expanding the number of registered manufacturers is critical to understand fully the potential benefits and possible risks associated with cannabis use, as researchers must be able to study actual products that are currently used by consumers for both medical and recreational use.”

The U.S. Department of Agriculture extended the deadline for the public to submit comments on proposed hemp regulations.

Hemp is now legal in the U.S., thanks to passage of the 2018 Farm Bill. Signed into law on December 20, 2018 by President Trump, the sweeping agricultural legislation essentially decriminalizes hemp

Ever since the landmark 2018 U.S. farm bill legalized hemp, the highly versatile plant (a low-THC cousin of marijuana) has gone mainstream in a rising number of states.

The Food and Drug Administration warned in a consumer update that driving after using cannabidiol (CBD) products can be dangerous. CBD does not contain THC. Regardless, cannabis when for medicine or recreation, at any dosage, can impair driving abilities.

The increasing prevalence of CBD products within the mainstream consumer culture is raising concerns among health and safety regulators. Many consumers are unfamiliar with CBD and its effects and they often encounter dosage problems.

Federal law enforcement agencies are working with several states to survey drivers about their driving habits. They’re also training local police officers to recognize marijuana impairment among drivers. Regardless of the THC levels in the bloodstream, and whether the substance was prescribed by a doctor, impairment observed by a police officer can result in arrest.

In Illinois, recreational marijuana goes on sale January 1. Illinois Gov. J.B. Pritzker (D) recently tweeted: “When we made equity the core of the state’s new adult-use cannabis market, we wanted to ensure that social equity entrepreneurs had access to capital to get their businesses off the ground, and we’re proud to announce that interested applicants can start this process today.”

The downturn this year in marijuana sector stocks has hurt the ability of several marijuana companies to raise capital. States such as Illinois are trying to rectify the problem.

Washington, D.C. Mayor Muriel Bowser (D) recently posted this tweet about Congress continuing a rider blocking the city from legalizing marijuana sales: “Ridiculous. We should have the right to implement #SafeCannabis just like other jurisdictions do to promote safety for their residents.”

Rhode Island’s Senate president said he doesn’t think the state will legalize marijuana in 2020. That seems counter-intuitive, because Rhode Island (aka “Little Rhody”) is home to the nation’s greatest marijuana use, by percentage of population (see chart). 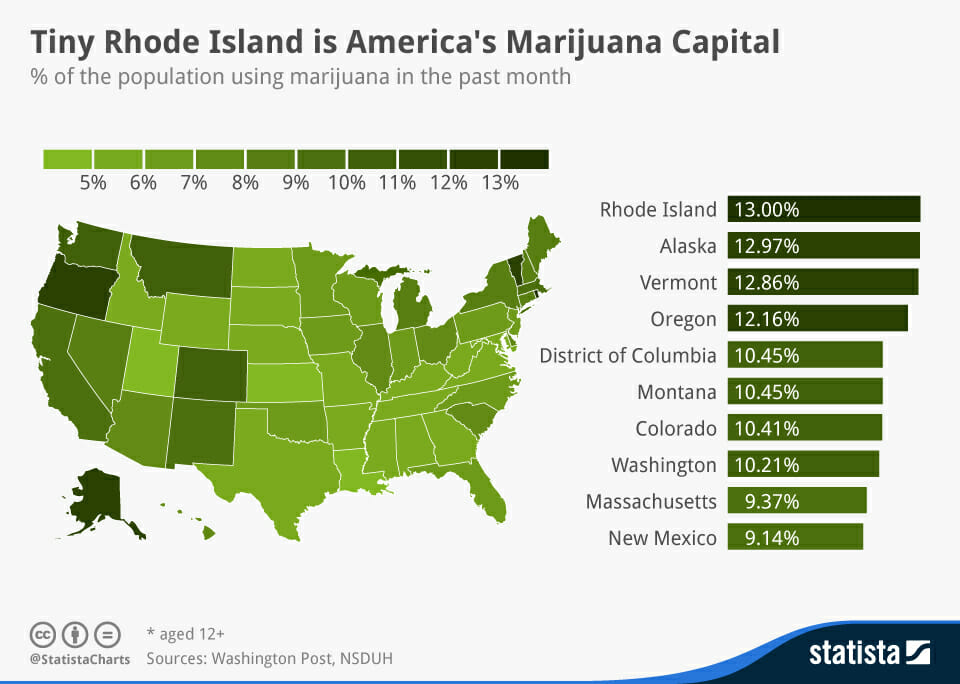 The California Legislative Analyst’s Office released several reports on marijuana tax issues, including a recommendation that cannabis be taxed by potency instead of weight.

The Florida House of Representatives filed a brief in a state Supreme Court case regarding the Sunshine State’s medical marijuana regulations. Through passage of a 2016 ballot initiative, Florida became the first Southern state to legalize medical marijuana. Recreational pot remains illegal in the state.

Michigan regulators issued a bulletin about the recall of medical cannabis vaping products over the presence of vitamin E acetate.

John Persinos is editor-in-chief of Marijuana Investing Daily. You can reach him at: mailbag@investingdaily.com