The Race For “Cannabis 2.0” Just Got Faster

As a college student during the 1970s, I was indoctrinated with the cult-like tenets of the natural foods movement. Artificial was bad. Natural was good. And yes, I ate a lot of tofu.

But when I graduated and entered the workforce, I traded my Birkenstock sandals for wing tips. And I learned to recognize that artificial versus natural isn’t a stark distinction between good versus bad.

Today, let us praise the artificial…specifically, synthesized cannabis. For millennia, human beings have been compelled to improve on nature. This tendency is now one of the biggest trends in the marijuana industry. As I’ll explain, the federal government last week gave the pursuit of artificial marijuana a big boost.

Don’t forget a basic fact: marijuana is just a plant. It’s a commodity. As such, growing marijuana or squeezing various oils from the plant aren’t the surest ways to profit from the “green rush.”

As legal restrictions against marijuana are increasingly removed, the weed is becoming commoditized and subject to downward price pressures. The most profitable companies in the marijuana industry will be those that develop a proprietary technology that they can patent.

It’s a cycle we’ve seen inevitably unfold in countless other industries. The spoils go to the innovators with breakthrough technologies that disrupt the status quo. The future of marijuana belongs to the disruptors.

Hence the race for Cannabis 2.0. Many pharmaceutical companies, large and small, are currently researching and developing ways to synthesize cannabis for medical and recreational purposes. Synthetic cannabidiol (CBD) is chemically identical to plant-based CBD, but the synthetic version confers enormous scientific and commercial advantages.

THC is the element that produces the marijuana “high,” which has in turn kept cannabis illegal on the federal level in the U.S.

Despite this ban, the federal government is trying to pave the way for greater scientific research into synthetic cannabis.

Separately, lawmakers set aside nearly $16.5 million in funding to support the implementation of a domestic hemp program under the 2018 Farm Bill, which legalized the crop and its derivatives.

Cannabis the drug and hemp the industrial product both contain THC, but they are distinct strains with unique chemical compositions and uses.

Hemp is naturally high in CBD and low in THC; the reverse is true of cannabis. Hemp is the strongest natural fiber in the world and boasts up to 50,000 uses,

The drawbacks of natural pot…

Pharmaceutical companies using synthetic CBD in their drug compounds assert that it’s the optimum approach for ensuring consistency and high quality in the product.

Synthetic CBD contains none of the impurities associated with plants such as mold, pesticides, insect infestation, harsh extraction solvents, and heavy metals such as lead. Marijuana growing techniques sometimes entail the use of carcinogenic materials.

Marijuana users underestimate the extent to which natural marijuana can get contaminated, especially as regulations remain in the nascent stage. Synthetic CBD solves this problem. Yes, that’s right…artificial can be healthier.

Creating CBD in the lab, versus growing plants, also makes it easier and cheaper to increase the scale of manufacturing capacity. Companies aren’t subject to the vagaries of growing seasons or the risk of losing crops.

Another problem with natural marijuana is banditry in agricultural fields, which requires the deployment of costly security measures. Sometimes, marijuana thieves even resort to violence.

As the following chart shows, it’s daunting for any biotechnology company to get its products approved by the FDA. 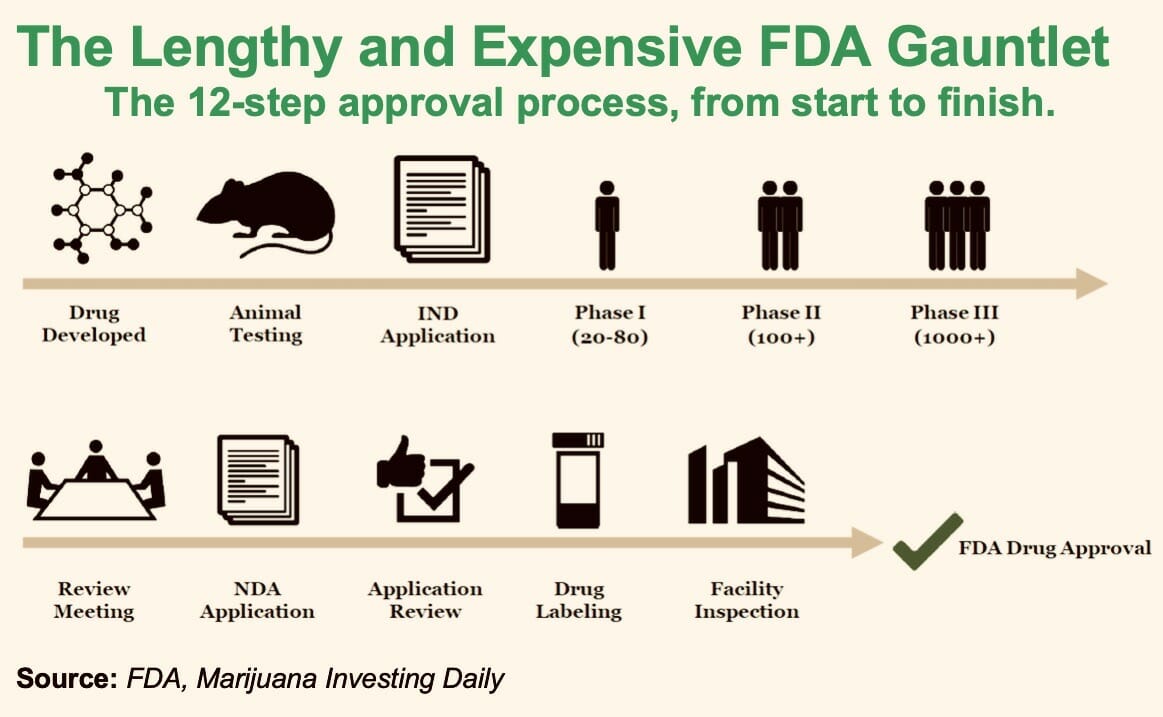 The approval process is costly and time-consuming. It takes on average 12 years and over $350 million to get a new drug from the laboratory onto the pharmacy shelf.

The process is especially difficult for marijuana biotechs, because marijuana is banned on the federal level and sufficient quantities of the natural plant aren’t always readily available.

You may be surprised to learn that to date, the FDA has only approved three cannabis-related drug products. These approved products require prescriptions…and they’re all synthetic.

The FDA has approved Epidiolex, which contains a synthetic form of CBD for the treatment of rare forms of seizures in patients two years of age and older.

Another FDA-approved drug, Cesamet, contains the active ingredient nabilone, which has a chemical structure similar to THC and is synthetically manufactured.

On November 25, the FDA issued warning letters to 15 companies for illegally selling CBD products in ways that violate the Federal Food, Drug, and Cosmetic (FD&C) Act. The FDA has previously sent warning letters to other companies illegally selling CBD products in interstate commerce that claimed to prevent, diagnose, mitigate, treat or cure serious diseases, such as cancer, or otherwise violated the FD&C Act.

That said, the FDA continues to explore potential pathways for various types of CBD products to be lawfully marketed.

Call it test tube pot, Frankenweed, or any catchy term you prefer, but synthetic marijuana has the ability to generate the highest profit margins in the industry. A synthetic process can be protected by patent to ward off competitors, and companies can charge higher prices for this scientific value add. Synthesis also expedites economies of scale.

It’s in the promising sphere of synthetic cannabis that our investment analysts are focusing their attentions. For details on our latest marijuana research, click here for a report.

Questions about the money-making opportunities in synthetic marijuana? Drop me a line: mailbag@investingdaily.com