Marijuana laws are changing at a fast pace across all 50 states, making the legal landscape a bit confusing for marijuana businesses, consumers and investors. The year 2020 is a particularly crucial one for marijuana legalization.

Here’s my review of the latest legal, regulatory and political developments in cannabusiness.

The U.S. Department of Agriculture issued the first approvals for state and tribal hemp programs since the crop was federally decriminalized under the 2018 Farm Bill. A low-THC cousin of the marijuana plant, hemp seeds and fiber boast diverse industrial, medical and food benefits.

“Cannabis” is a genus of flowering plants that includes the primary species cannabis sativa. Both hemp and marijuana are strains of the cannabis sativa species.

Sen. Roy Blunt (R-MO) said he hopes that Congress will send a marijuana banking bill, the Secure and Fair Enforcement (SAFE) Banking Act to President Trump’s desk. “If you make it all cash, you’ve highly increased the bad things that can happen,” Blunt said. However, Blunt still hasn’t joined more than a third of his Senate colleagues who have actually cosponsored the legislation.

Passed by the U.S. House, the SAFE Banking Act still requires the approval of the U.S. Senate and President Trump to become law.

The SAFE Banking Act precludes a federal bank regulator from the following:

SAFE also protects the depository institution, its officers, directors and employees from liability under federal law solely for providing financial services or investing any income attributed to financial services provided to such CRLB.

Democratic presidential candidate Andrew Yang said he was considering legalization of certain drugs, including marijuana, to take profits away from cartels.

Yang stated: “I’m open to looking at legalizing different drugs that are not just fueling the cartel but also in some cases would frankly be an upgrade over the opiates that many Americans are currently getting addicted to.”

Sen. Jacky Rosen (D-NV) tweeted: “More American adults have access to marijuana than ever before. It’s critical that we expand licenses for research into its potential health and therapeutic benefits.”

Rep. Barbara Lee (D-CA) tweeted: “Marijuana is a legitimate industry that should have legitimate access to banking services to start successful businesses. Especially for people of color who have been disproportionately incarcerated from marijuana criminalization.”

California lawmakers and activists vowed to put a ballot measure to the state’s voters in 2020 that would lower taxes and ease regulations on marijuana, as a way to mitigate the fast-growing black market for marijuana sales.

Starting January 1, a new law in Colorado allows for the commercial delivery of marijuana. It will begin with medical marijuana in 2020 and recreational pot will follow a year later.

Also taking effect January 1 is another law that allows two new types of marijuana-related businesses in Colorado. Businesses can apply to be licensed as a tasting room that can sell cannabis products onsite. The law also allows for “marijuana hospitality establishments,” which allow the onsite consumption of marijuana, but the not sale of it.

Illinois Gov. J.B. Pritzker (D) pardoned more than 11,000 people for past marijuana records, on the eve of legal recreational cannabis sales beginning in the state on January 1.

Stated Pritzker: “These 11,017 misdemeanor convictions represent individuals who have carried around with them a stain on their records for possessing less than 30 grams of cannabis, a stain that has very often prevented them from obtaining housing or jobs or benefits.”

The Land of Lincoln is a potentially huge market for cannabis sales but it lags other major markets in the number of approved retail outlets (see chart). 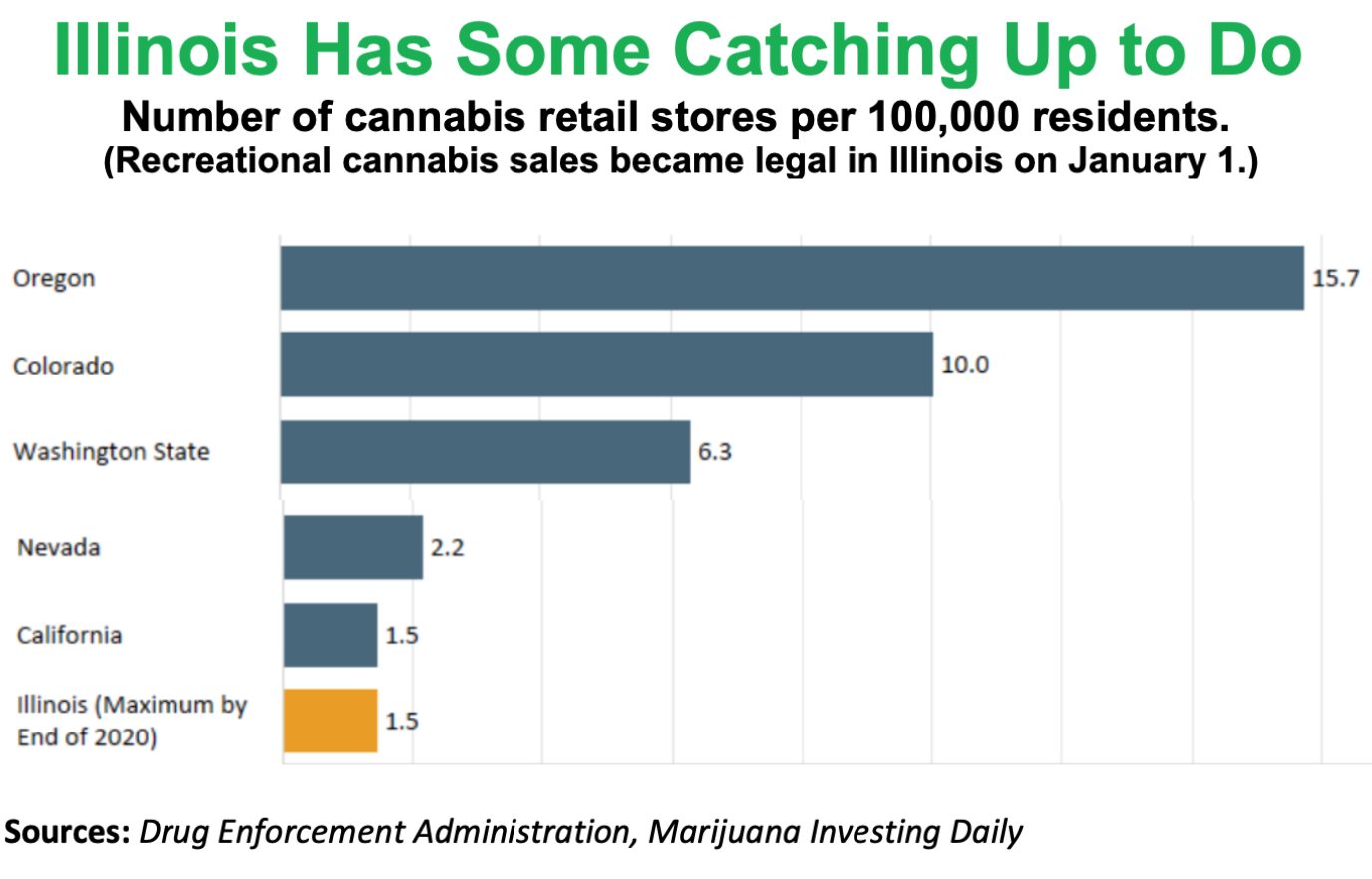 In separate news, the Illinois State Police issued a statement saying it “will not revoke Firearm’s Owner’s Identification Cards based solely on a person’s legal use of adult use cannabis.” Separately, regulators announced another round of approvals for medical cannabis dispensaries to sell recreational marijuana.

New Jersey Gov. Phil Murphy (D) cited the expansion of the state’s medical cannabis program as an example of “tremendous progress” achieved in 2019.

Editor’s Note: The start of a new year a good time to consider marijuana value plays, before the market gets overbought again. The Investing Daily team continually scours the landscape for inherently solid marijuana stocks. For our team’s latest research on the best pot investments, click here.