I was born, raised and educated in Massachusetts, a state where the Puritan ethos still runs deep. Whenever I visit California, the social mores seem, well, a lot looser.

Therefore I was not surprised to learn that California is home to the world’s biggest black market in illegal marijuana sales. Illicit pot is a multi-billion dollar market in California and it’s growing exponentially.

California typically occupies the vanguard of cultural and economic trends. The consumer preference for black market pot is spreading nationwide and unless rectified, poses serious headwinds for marijuana investors.

It’s not just California, although that’s where the problem is worst. Throughout the U.S. and across the border in Canada, the legalization of marijuana has ironically fueled illicit street sales, even in areas where prohibition has been completely lifted.

Federal and state governments realize that the marijuana boom is a potential bonanza in tax revenue and sure enough, elected officials are filling their treasuries with copious revenue from new pot taxes.

Analysts estimate that an additional 15 states will have legalized medical and/or recreational pot by 2020. California’s dilemma serves as an instructive case study for other states.

In a landmark 1996 ballot measure known as Proposition 215, medical marijuana was legalized by California voters. Approval of the measure opened the floodgates for marijuana legalization throughout America.

California officials originally estimated the state would take in $1 billion annually in tax revenue from cannabis. The actual numbers? Not even close. In the state’s fiscal year that ended in June, only $288 million was collected. California marijuana users seem determined to avoid the taxman, pushing black market sales to epidemic proportions.

The report asserts: “Despite the state’s committed efforts to bring cannabis businesses fully into the regulated commercial market, as much as 80% of the cannabis market in California remains illicit.”

The 22-member advisory panel is comprised of marijuana industry leaders, state and local lawmakers, law enforcement officials, and health experts. Governor Newsom has vowed to take the problem seriously. At the grassroots level, pressure is mounting for a ballot initiative in 2020 to lower taxes and bureaucratic impediments for marijuana.

Black market sales are a problem nationwide in the U.S. and in Canada. So why am I focusing on California? Because, as with so much else, California is the bellwether.

The research group New Frontier projects that California will generate $3.1 billion in licensed pot sales in 2020, making it the largest market for legal cannabis in the entire world (see chart). 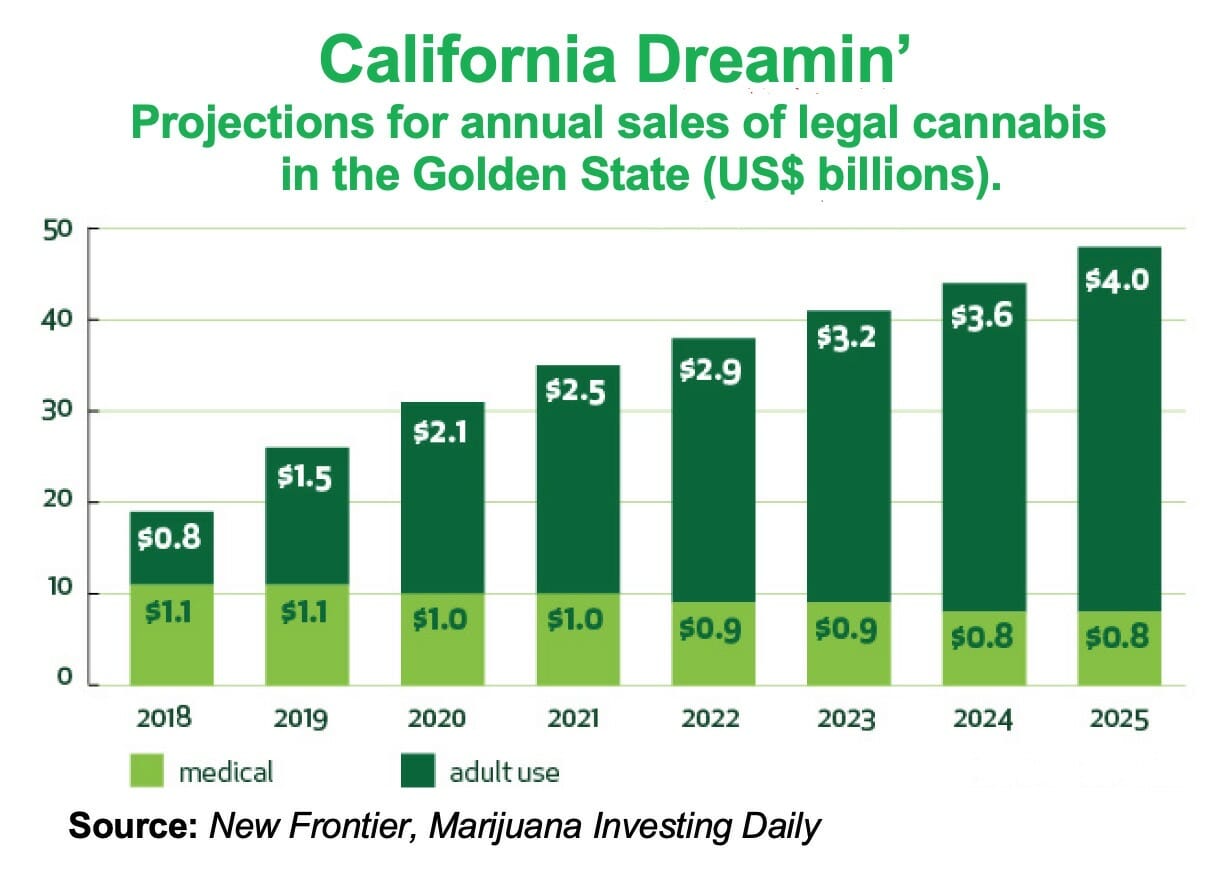 By way of comparison, marijuana shops in my native Massachusetts (where both recreational and medical pot are legal) reported a mere $420 million in sales in 2019. Legal shops in the Bay State also find themselves competing with the black market, a situation that’s playing out in every state where pot is legally sold.

But California’s black market dwarfs all others. The Cannabis Advisory Committee of California estimates that roughly $8.7 billion will be spent by consumers in California in 2020 on unlicensed sales. That’s nearly three times the amount of legal sales. This huge amount of money is not going to investors. It’s going to criminals, some of whom adhere to violence as a necessary adjunct to their business activities.

The curse of NIMBY…

Local restrictions in California aren’t helping. Any city in California may have its own unique ordinances. About 75% of the state’s cities have banned marijuana dispensaries. NIMBY (Not In My Back Yard) is alive and well in the state’s marijuana industry.

In response to these daunting statistics, the state Bureau of Cannabis Control is finally cracking down on black marketeers. On December 12, the bureau and local authorities served search warrants on 24 unlicensed pot shops and seized $8.8 million in cannabis products.

To be sure, marijuana legalization should accelerate in 2020, with a growing number of states easing restrictions against cannabis.

But at the same time, the number of persons arrested in the U.S. for violating marijuana laws has risen for the third consecutive year, according to the most recently available data from the U.S. Federal Bureau of Investigation.

Indeed, California activists are currently considering whether a new ballot initiative is needed to address regulatory impediments in the state’s current legal structure regarding marijuana.

These thorny issues are why I provide regular updates regarding legal developments in the marijuana industry. Changing laws can directly affect your marijuana investments, but I’ll keep you updated, every step of the way.

Questions about marijuana investing? Click here for our free report.