In researching this article, I came across an e-commerce site in Canada that sells THC-infused maple syrup. Yet another indication that the Great White North is in the vanguard of the cannabis revolution.

But as I’ll explain, being the leader can have its downside.

In October 2018, Canada legalized on the federal level the possession and use of recreational marijuana. Canada was the first G7 nation to take this bold step and it triggered a seismic shift in the worldwide marijuana industry.

According to a recent study by Grand View Research, the global legal marijuana market should reach $66.3 billion in sales by 2025, up from $10 billion in 2018. That’s a whopping increase during the projected time frame of nearly 600%. The result has been a proliferation of marijuana stocks that are captivating investors who seek fast riches.

Canada, in particular, has attracted an investor frenzy. Many marijuana companies are based in Canada and trade on the Toronto exchange, because Canada is widely perceived as “ground zero” for marijuana expansion. But things haven’t gone as planned.

Welcome to the great Canadian buzzkill, whereby marijuana sales and stock prices have fallen. The let-down in Canada is instructive for marijuana investors. You need to pick marijuana stocks for their fundamentals, not because of an enticing narrative.

How bad is the downturn? During the first year after Canada legalized pot, the value of shares in Canada’s six largest marijuana companies plunged by an average of 56%, according to data from the research firm FactSet.

It’s my contention, though, that a bounce-back is imminent. The global trend toward marijuana legalization is unstoppable, especially as federal and state governments get accustomed to the tax revenues from marijuana sales.

Canada’s marijuana industry is experiencing inevitable growing pains, but the long-term view is encouraging. Let’s examine the current state of cannabis in the influential Canadian market.

The seeds for a recovery in Canadian marijuana stocks were planted this week and they should soon come to fruition. On December 16, marijuana-infused drinks and foods started to enter the legal market.

But obstacles remain to marijuana sales in Canada, notably red tape and slow-moving bureaucracies. Just because something is technically legal doesn’t mean officials are expediting its use.

Provincial governments in Canada have granted licenses for legal pot shops at a slow pace, which has motivated millions of consumers to get their marijuana on the black market. Because street pot evades taxation, it’s considerably cheaper than legally sold pot, a dilemma that also afflicts the marijuana industry in the U.S.

That said, the marijuana industry faces significant tailwinds in Canada, and by extension the U.S. For starters, Canada has a high rate of cannabis use (see chart). 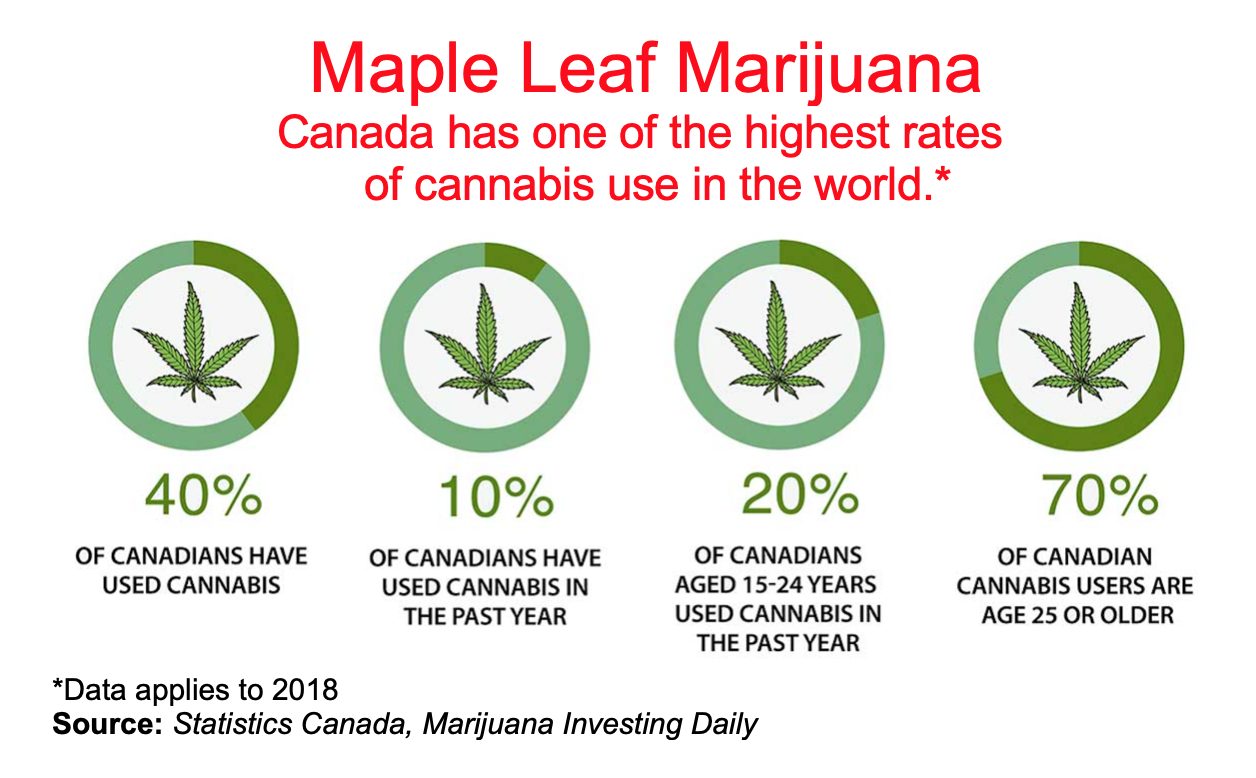 Another positive trend is the embrace of marijuana in Canada by the vast demographic of aging baby boomers. There’s been an increase in pot use among people over 65, according to Statistics Canada, the government census agency. The agency reports:

“According to combined data collected during the second and third quarters of 2019, there are about 578,000 new cannabis users, that is, those who reported trying cannabis for the first time in the past three months. First-time use increases with age.

Statistics Canada found that only 28% of marijuana buyers meet all of their marijuana needs via legal sources. As I noted above, it’s cheaper to buy illegal pot.

We’re seeing the same dynamic unfold in the U.S. Accordingly, the number of persons arrested in the U.S. for violating marijuana laws has risen for the third consecutive year, according to the most recently available data from the U.S. Federal Bureau of Investigation.

In Canada, state and local governments are trying to stem the tide of black market purchases.

Ontario last week announced that it was eliminating its limits on store licenses and will provide about 20 licenses monthly, starting in March 2020. Canada also is experiencing a proliferation of e-commerce sites dedicated to marijuana.

So don’t count Canada out. Investors will soon be singing “Oh Cannabis!” as the country’s pot industry stages a comeback. Also keep in mind, Canada enjoys a robust and stable national economy. Our neighbors to the north still offer plenty of opportunity for pot investors.

In the meantime, if you’re looking for the best marijuana stocks to buy now, click here for our research team’s latest report.

If you’re looking for Canadian maple syrup laced with THC, you’re on your own.

John Persinos is the editor-in-chief of Marijuana Investing Daily. Questions or comments? Drop him a line: mailbag@investingdaily.com