At a political luncheon in Miami a few years back, a celebrity keynote speaker got up to address the crowd:

“We’re losing badly the war on drugs. You have to legalize drugs to win that war. You have to take the profit away from these drug czars.”

The speaker went on to argue that the legalization of all drugs in America made perfect sense and could generate badly needed tax revenues.

Was the speaker an ultra-liberal lawmaker, like Bernie Sanders? Or Elizabeth Warren? Nope.

It was Donald J. Trump, who now sits in the Oval Office. That luncheon was back in 1990 and since then, Trump has reversed his stance on cannabis. But in rhetoric only.

Following Trump’s unexpected election as president in 2016, the White House has periodically fulminated against pot but done nothing tangible to impede the state-level legalization of marijuana.

Former Vice President Joe Biden spouted some anti-pot rhetoric of his own last Saturday at a political town hall, stating that he wants to see more data about the safety of marijuana use before embracing efforts to legalize it on the federal level. Harking back to the bygone terminology of the War on Drugs, Biden also used the term “gateway drug” to describe cannabis. I haven’t heard that expression since Richard Nixon was president.

My take? I question Biden’s motives on the issue of marijuana. He’s probably just appeasing socially conservative voters, as he seeks the Democratic nomination for president.

The trend is your friend…

Whether you think marijuana legalization is beneficial or immoral is beside the point. The legalization train has left the station and no politician can stop it.

To be sure, marijuana stocks have plunged in recent months. But the trend toward marijuana decriminalization continues unabated, as more and more U.S. state governments lift prohibitions to varying degrees.

If you own inherently sound marijuana investments but they’ve taken a beating lately, hang on and remain patient. The trend is your friend.

Gallup polls show national support for legalization has soared from 44% to 66% during the last decade. How big a cultural shift does that represent? When Gallup first asked Americans the question in 1969 (when Nixon was president), only 12% at that time said it should be made legal.

As laws legalizing marijuana spread across the U.S., the perception of risk associated with marijuana is decreasing, especially among the older adult population who came of age during the rebellious 1960s and 1970s.

As they retire, many senior citizens will either continue, restart, or initiate marijuana use. These Baby Boomers remember marijuana from their youth and they’re rediscovering it. Meanwhile, younger generations have scant qualms about pot.

Read This Story: Millennials and Marijuana: Agents of Change

Analysts estimate that an additional 15 states should have legalized medical and/or recreational pot by 2020.

New Jersey is the latest state to get into the act.

New Jersey leaders have shelved previous efforts to secure state-wide legalization of recreational marijuana. Instead, top members of the state Senate said Monday that they plan to put the question to Garden State voters in the 2020 elections as a referendum next November.

Under legislation that Democratic lawmakers introduced on October 30 in the Wisconsin legislature, possession of marijuana would be decriminalized. The bill faces Republican opposition but the state’s Democratic governor has pledged support and chances of eventual passage are good.

Through passage of a 2016 ballot initiative, Florida became the first Southern state to legalize medical marijuana. Recreational pot remains illegal in the state but it’s widely expected to get legalized during the next election in 2020.

Florida alone is expected to generate $1.09 billion every year in medical marijuana sales. If Florida legalizes recreational marijuana next year, the industry’s growth in the Sunshine State (a major pot market) will soar.

Here’s a snapshot of the current legal status of pot from coast to coast: 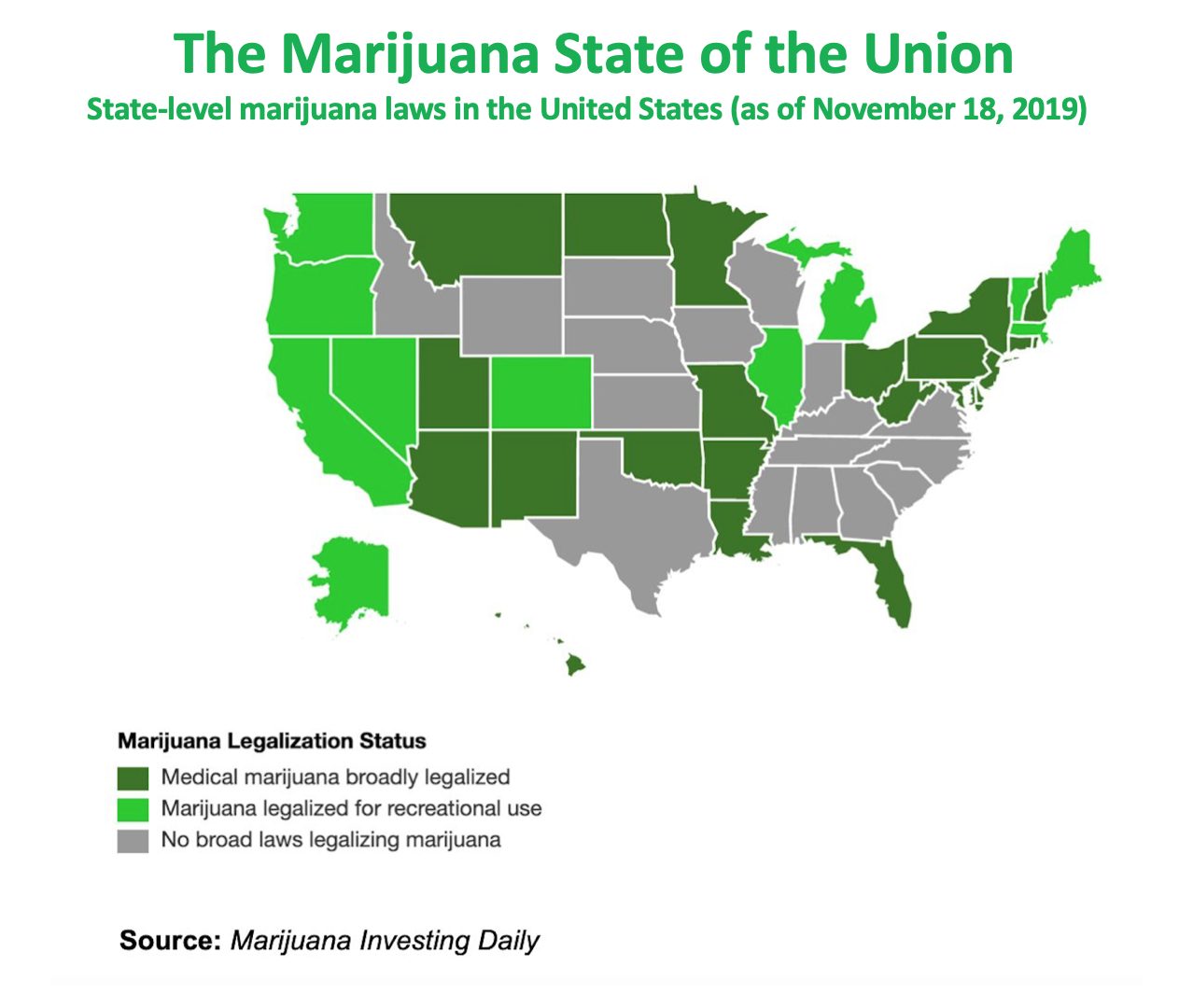 According to the latest statistics from Arcview Market Research and its research partner BDS Analytics, spending on legal cannabis worldwide is expected to hit $22.8 billion by 2020. The adult-use (recreational) market will account for 67% of spending; medical marijuana will take up the remaining 33%.

Arcview and BDS also report that the total economic output from legal cannabis will grow 150% from $16 billion in 2017 to $40 billion by 2021, through the “multiplier effect” of job creation in ancillary industries and greater tax revenue.

It’s akin to the repeal of alcohol Prohibition in 1933, which in hindsight was inevitable. That year, millions of thirsty Americans turned from Al Capone to legitimate businesses for wine, beer and liquor.

A recent profit catalyst for canna-business was passage of the 2018 Farm Bill, signed into law on December 20, 2018 by President Trump. The bill removes hemp-based cannabidiol (CBD) from “scheduling” under the Controlled Substances Act and places it under the aegis of the U.S. Department of Agriculture. In effect, the bill decriminalizes hemp and its components.

Hemp is a cousin of marijuana, with lower levels of THC but a myriad of practical uses for industry, medicine and food.

The U.S. House of Representatives in late September advanced a bill that would protect banks that service the cannabis industry from being penalized by federal regulators. Called the Secure And Fair Enforcement (SAFE) Banking Act, the legislation seeks to expedite the provision of financial services to cannabis companies by removing the fear of potential federal action against lenders.

I formerly worked as a press secretary to a U.S. congressman. I’ve retained my insider connections on Capitol Hill and they tell me that the ultimate chances of SAFE becoming law are good. That’s important, as the industry faces a cash crunch.

The marijuana sector has undergone a correction (as I predicted it would). But the upward momentum will return.

One way to mitigate risk in the marijuana sector is to invest in indirect plays that are safer bets on growth because they’re involved in non-cannabis niches as well. These niches include pest management, testing, agricultural tools, growing methods, etc.

Some of the best marijuana investments are ancillary to the industry. If pot goes bust, these firms can still rely on other core operations.

You should also consider small-cap marijuana companies that license their proprietary technology to bigger companies. If you’re a fan of the television show “Shark Tank,” you know that the idea of licensing a product is often raised as a potential opportunity by sharks when entrepreneurs come into the studio.

The blue chips are willing to make these marijuana bets, because they’re big enough to absorb the risk. By the same token, partnerships can allow the small fry to cheaply piggy-back an entrenched sales, marketing and delivery network.

Admittedly, the bubble recently burst in the marijuana sector. Marijuana stocks tend to move together, so bad news for one marijuana company often produces a downdraft for the entire sector.

But shrewd investors welcome corrections. The recent pot swoon means you can now find bargains. Choose companies that generate actual revenue and earnings. Marketing brochures and fancy websites are no substitute for profits.

And remember this powerful tailwind: Prohibition is doomed.