Crisis Investing: Cut Through The Fog of War

In my distant youth, when I was a daily newspaper reporter, the news was delivered to readers on actual paper. We had a slogan in the newsroom: Today’s news is tomorrow’s fishwrap.

The U.S.-Iran confrontation now surpasses the trade war as the biggest risk to financial markets. Perhaps tomorrow the Iran crisis will be fishwrap, but right now it’s the crisis du jour.

“All is well! Missiles launched from Iran at two military bases located in Iraq. Assessment of casualties & damages taking place now. So far, so good! We have the most powerful and well equipped military anywhere in the world, by far! I will be making a statement tomorrow morning.”

It remains to be seen whether, as the president asserts, “All is well.” In the meantime, crude oil prices are on a roller coaster with upward momentum (see 12-month price chart, compiled with data from the U.S. Energy Information Administration): 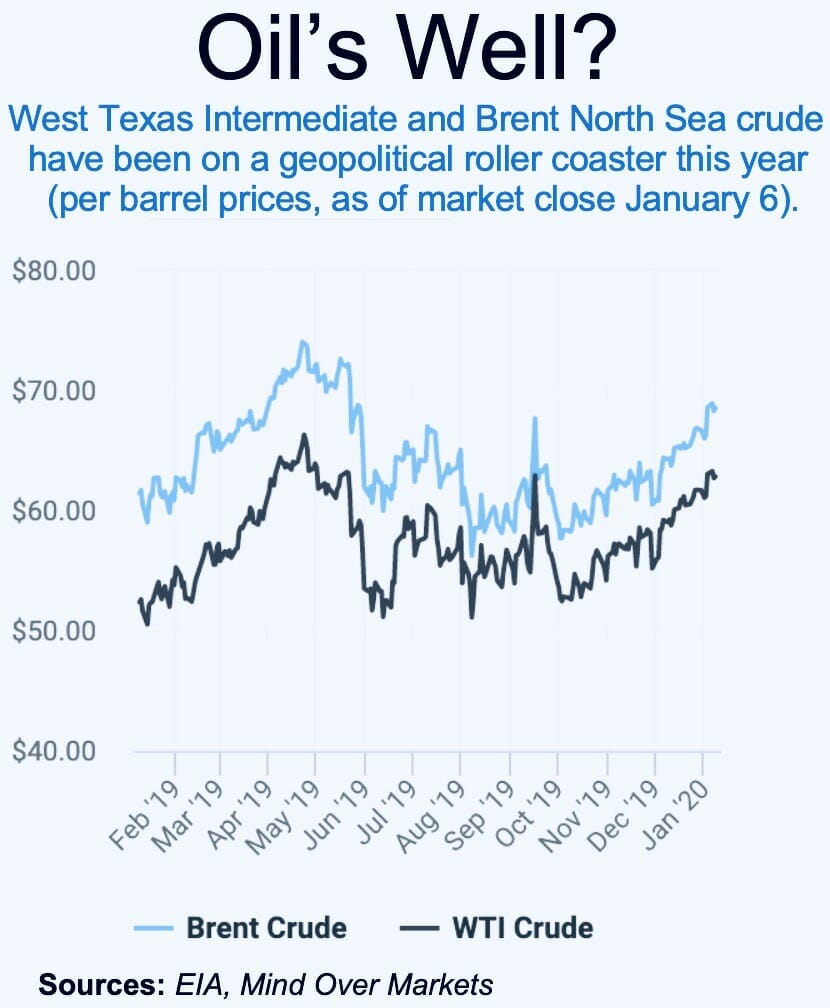 West Texas Intermediate, the U.S. benchmark, hovers at $62.80 per barrel. Brent North Sea crude, on which international oils are pegged, stands at about $62.60/bbl. As of this writing Wednesday morning, oil prices were soaring.

Iran acted not by proxy, but directly with its own official forces. Investors are understandably spooked.

The question now is, how will the U.S respond? And how should you, as an investor, respond? I’ll explain, below. For starters, make sure that your portfolio is diversified by geography, sector and asset class. Geopolitical shocks exert the worst damage to portfolios that aren’t properly diversified.

In pre-market futures trading this morning, stocks were poised to open in the green. Dow Jones Industrial Average futures had fallen more than 400 points in after-hours trading, before regaining ground as Iran’s retaliation fell short of Wall Street’s fears.

The major U.S. stock market indices yesterday all closed lower after choppy trading, due to jitters about the U.S.-Iran confrontation. The Dow closed down 119.70 points (0.42%), the S&P 500 fell by 9.10 (0.28%) and the NASDAQ composite declined 2.88 (0.03%). Decliners outnumbered advancing issues by a 3-to-2 ratio on the NYSE. Newly optimistic projections for semiconductor demand kept losses in check for the tech-heavy NASDAQ.

We’re seeing increased demand for safe havens such as gold and alternative assets such as Bitcoin (BTC).

Small-cap stocks have racked up a multi-day slump, reflecting the shift away from risk assets.

If the U.S. and Iran step off the precipice and tensions ease, Treasury yields could experience a strong rally. Keep an eye on Friday’s government jobs data, which will probably provide the next big catalyst for stocks and bonds.

Forthcoming earnings reports will provide further clarity. U.S. companies begin reporting fourth-quarter 2019 results next week. According to FactSet, the S&P 500 is expected to report a year-over-year decline in earnings of -1.5% for the quarter.

However, FactSet calculates that based on the average change in earnings growth due to companies reporting positive earnings surprises, the index will probably report earnings growth for Q4 (see chart). 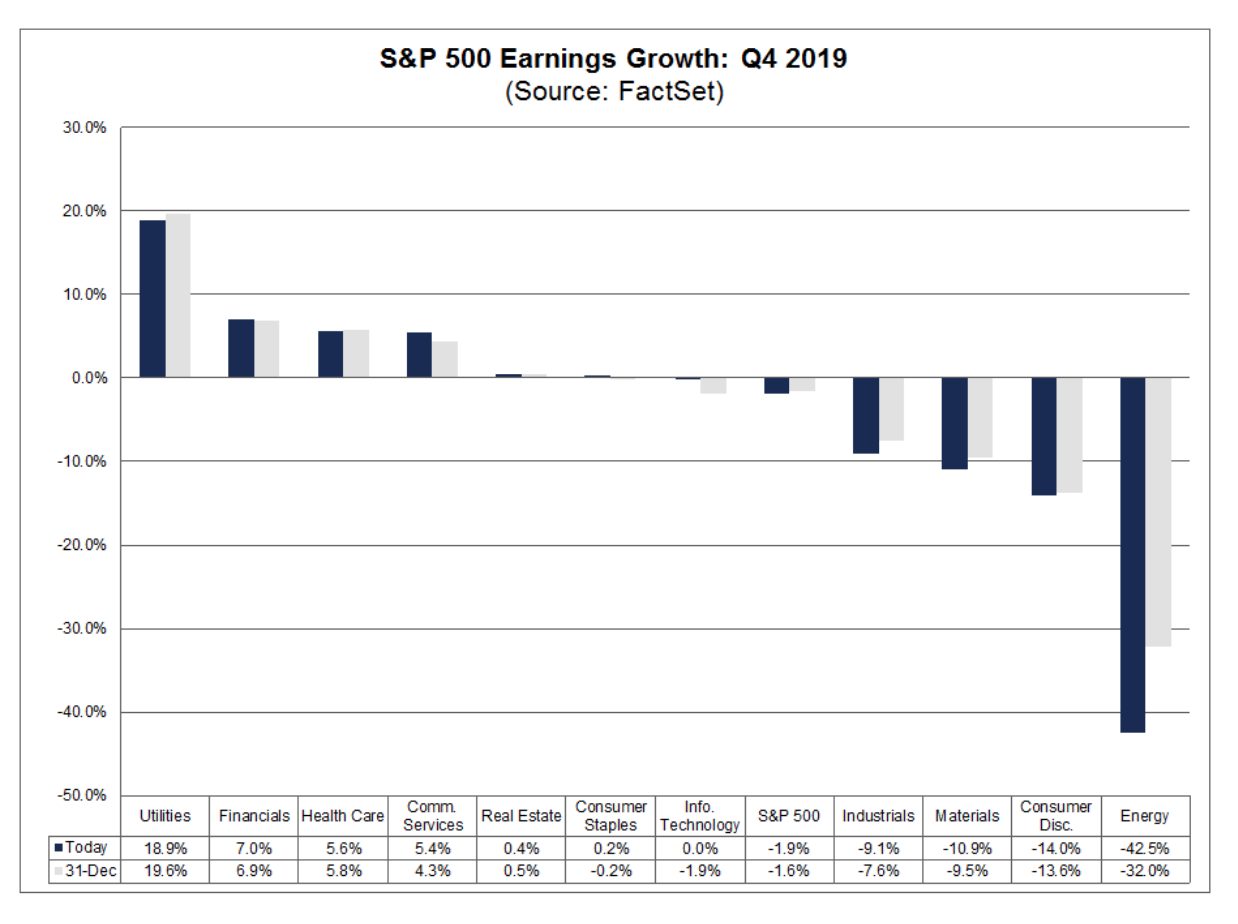 In the current investment climate, you should emphasize sectors appropriate for the late stage of economic recovery, such as utilities and health care. These sectors also enjoy insulation from global military tensions.

The story behind the story…

Make no mistake, America’s long obsession with Iran is about oil and gas. Otherwise, this Middle Eastern country would receive scant attention from the Western powers and media. Iran boasts the world’s third-largest oil reserves and the second-largest natural gas reserves.

Iran was a key energy producer under Mohammad Reza Pahlavi (aka the Shah of Iran), who was installed by a CIA coup in 1953. Iran remains a major energy producer, despite the 1979 Islamic revolution that deposed the autocratic Shah. Iran has gone from Western-allied dictatorship to Western-hating theocracy, but through it all, the oil and gas wells have kept pumping.

The U.S. shale oil revolution hasn’t changed the fact that Iran remains a major competitor to Western-based energy producers. What’s more, dismal earnings results from shale companies in the North American energy patch reveal that the shale boom is not sustainable, neither financially nor technologically. Experts expect a wave of bankruptcies this year among shale players.

Iran is a member of OPEC and it uses its hydrocarbon deposits as leverage to extend its influence in the region. So when the pundits prattle on about regime change and other highfalutin notions, remind yourself that the real issue is oil and gas. In the Middle East, it’s always about hydrocarbons. Don’t get whipsawed by political theatrics.

Under current conditions, a generally appropriate portfolio allocation is 50% stocks, 25% hedges, 15% cash, and 10% bonds. Stay tuned…and stay diversified. And if we’re all lucky, today’s U.S.-Iran crisis will turn out to be tomorrow’s fishwrap.

Questions about crisis investing? Send me an email: mailbag@investingdaily.com